Copulas: Concept and use in Risk Measurement

What is a copula? An heuristic approach would be to say that copulas are multivariate probability distributions that embody rules determining the dependency between the random variables involved. So, the way in which these variates depend on each other lies inside the copula. If we change the copula, we will also change the way in which the variables depend between them. This suggests that copulas may be useful to model the dependence between random variables or between risks that affect a particular activity.

The correlation coefficient may lead to erroneous conclusions when applied in situations where it is not suitable as a dependence measure. Let’s look at an example. Each of the following graphs shows 500 random simulations of the losses from two risks, X and Y (i.e.: claims from two different types of events, compensations to pay for two different causes, etc.) 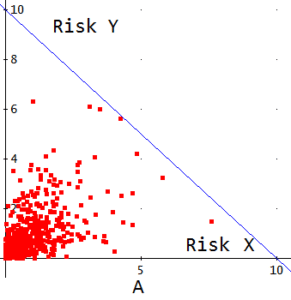 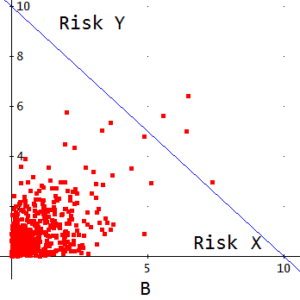 Risk X and risk Y have been simulated from the same distribution function and therefore have the same mean, variance, etc. However, both graphs A and B, differ in something very

important:  In A there has not been any result where the sum of the amount of risk X plus the amount of Y exceeds 10 units, while in B there are some experiences that do exceed this threshold (represented in A and B by the straight diagonally descending line). Is this difference due to the fact that the correlation coefficient is greater in B than in A? No. In both cases the coefficient is 0.5. The greater severity of the risks (X, Y) in graph B stems from the different way in which these risks depend on each other, severity that is not reflected by the correlation coefficient.

This example leads us to the conclusion that any bivariate (and, in general, multivariate) distribution function involves two aspects defining the statistical behavior of these random variables:

First, we obtain the inverse functions g-1 and h-1. This is done by solving u=g(x) and v=h(y) for x and y respectively. We thus obtain x= g-1(u), y= h-1(v). We note that u and v represent the probability corresponding to each value of x and y according to the marginal distribution function g and h. So, the range of u and v is the interval (0 -1).

The copula is, therefore, “what remains” of a distribution function once the marginal behavior of the random variables is eliminated. Therefore it is the element that regulates and determines the dependence structure between those variables. The copula is a function defined for values between 0 and 1 of its independent variables u, v. Actually, it is the joint distribution function of these uniform variables (0,1) designated by u, v. The following graph shows the density function of the copula corresponding to a t-distribution with 4 degrees of freedom and a correlation coefficient of 0.6. 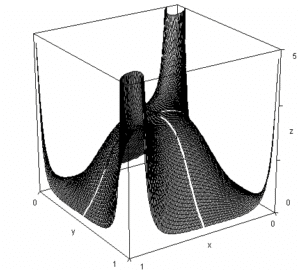 We have already seen how a copula can be obtained from a known multinomial distribution (Gauss,  t-distribution). However, different copula models can also be obtained if we build functions that meet the essential requirements for the result to be considered a copula. Thus, in addition to the aforementioned Gauss and Student copulas, there are many others such as Clayton, Gumbel, Frank, etc., so that the professional has a remarkable variety of options for modeling the phenomenon of interest.

What is, then, the use of copulas? Wherever there is a diversity of risks that may be dependent on each other, there will be scope for attempting to apply copulas. Regulations of financial institutions (banks and insurance companies) tend to include a plurality of risks that affect them in their solvency systems. Our interest will be not only on how these risks are distributed individually or separately (marginal distribution) but also on the way in which they depend on one another. It may be the case that, under normal conditions, there is no dependency between them, but when a crisis occurs, things get worse in all of them. In this situation, the correlation coefficient is not a suitable instrument, while the application of copula theory may in fact provide a satisfactory result. In the European Union regulations on insurance company solvency (Solvency II), the coefficient of correlation is in some cases increased so as to allow for the insufficiency of this coefficient. Despite the advantage of its simplicity, this solution seems too crude to us to be satisfactory. Thus, in such cases it is advisable to consider the application of copula theory, that offers models flexible enough to adapt to a wide variety of phenomena.

The interested reader may use my work entitled Teoría de Cópulas. Introducción y Aplicaciones a Solvencia II (Theory of Copulas. Introduction and Applications to Solvency II, only available in Spanish) (Fundación MAPFRE) as an introduction to this topic, and subsequently continue with the study of the extensive literature available, proof of the great interest that it deserves among scholars and professionals of these issues.