Global economic growth is losing momentum across the board which seems to confirm the signs of exhaustion that herald a change in the economic cycle. At the moment, the current growth environment is favorable to the development of the insurance market, particularly in the Non-Life and Life risk segments which are closely linked to movements in the economic cycle (see Table 1). However, the forecast for world economic growth has been adjusted downwards compared with that of the previous six months, being estimated at around 3.6% (3.8% in 2017 according to available data). 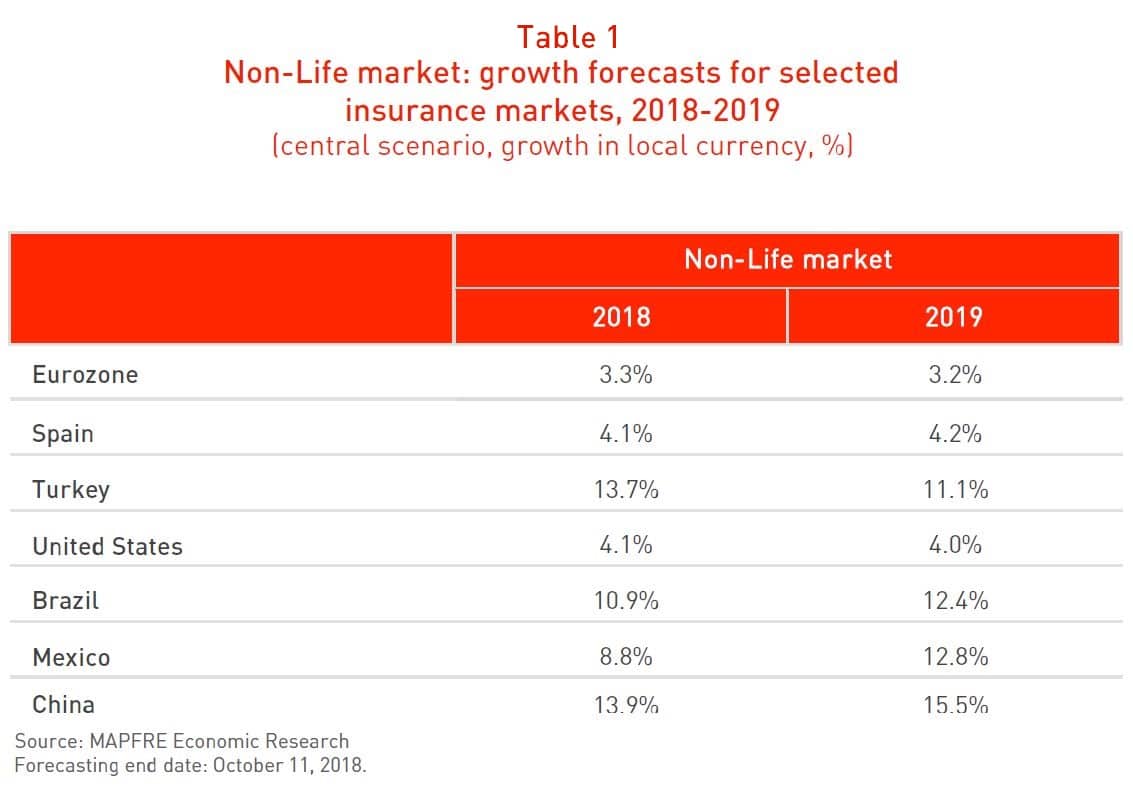 Moreover, the calibration of monetary policy and protectionist measures in the United States, among other factors, mean the level of uncertainty remains high. Some emerging markets continue to experience financial stress with cash outflows and declining interest rates and are having to take action to defend their currencies. The increase in market interest rates and risk premiums have a negative impact on potential financing of governments and businesses by those markets. This translates into reductions in the value of asset portfolios of insurance companies. The currency depreciation and inflation this generates is accompanied by a fall in profitability as the cost of claims increases. In spite of this, the market until now has distinguished between emerging markets depending on their underlying strength.

In the Eurozone, the timetable for the gradual calibration of monetary policy continues despite a slowdown in Eurozone growth, the increased risk arising from Italy’s expansionary budget, and the possibility of a Brexit without agreement. Against this background, the low interest environment will still continue for some time. This will constrain development in the Life insurance segment (especially in the Life Savings and Annuity business). In the Eurozone risk-free interest rate graphs produced by the European Insurance and Occupational Pensions Authority (EIOPA), a slight rise in rates along the length of the curve is to be noted, positioned above the average values attained in 2017 and those observed in the previous quarter (see Chart 1). The graph continues to show a positive trend with higher rates at longer maturities, but the levels are low and the short maturities on the curve continue to show negative values. 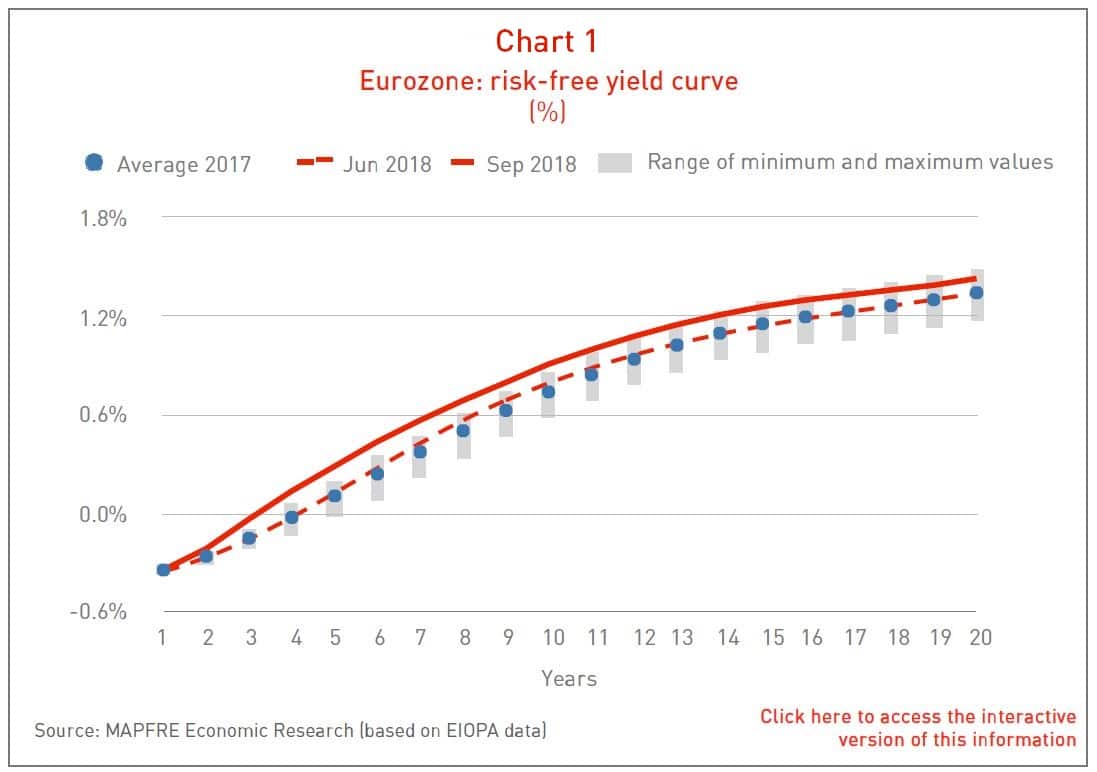 In the United States, the consistent increase in employment and gradual growth in salaries will continue to support growth in disposable income and consumption, although at a lower rate as a result of the effects of the fiscal stimuli slackening off and finance costs caused by the calibration of monetary policy increasing. Although a change in the cycle is expected, the economy is at a stage that continues to be favorable for the insurance industry, especially with reference to the Non-Life and Life risk businesses. However, the current economic cycle is already the longest in this country’s post war history, so it is possible that we are at a very advanced stage which the latest fiscal stimulus is prolonging.

Moreover, inflation has stayed close to the Federal Reserve’s objective for some months. It is expected that the quarter-point rise in interest rates will happen in December, followed by two or three rate increases in 2019. To be noted from the risk-free interest rate graphs produced by EIOPA are the increases, affecting all points on the curve which in the last quarter stays level and moves in parallel, except for a slight upturn in the two-year rate (see Chart 2). This higher interest rate environment, which should in principle be favorable, does however complicate the development of the Life Savings and Annuity business. A flat curve, an increase occurring more suddenly than initially forecast, and the very expectation of interest-rate rises damage this business in the short-term, given that companies need time to adapt to new products, and guaranteed rates in their portfolios and the surrender of policies with guarantees sold at interest rates lower than market rates can occur. In these circumstances also, the demand for savings products can be slowed down whilst the rate rises materialize. 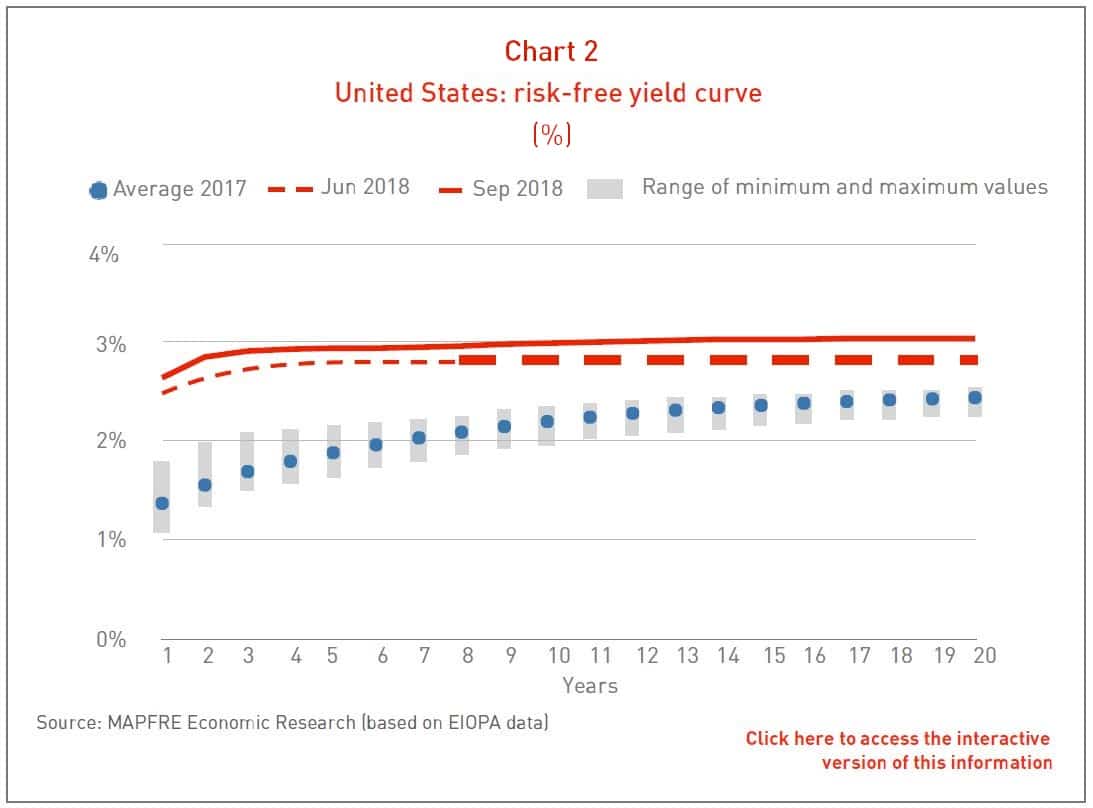 In Spain, the estimated economic growth for the whole of 2018 stands at around 2.6% (3% in 2017). The end of the expansionary monetary cycle being close, and the foreseeable increase in the tax burden, are leading to downward adjustments in growth forecasts. In spite of this, expectations for the insurance industry continue to be favorable, especially in the development of the Non-Life and Life risk lines of business, although their growth could be affected by the slowdown in the economy (see Chart 3).

As regards regulatory trends, there is news about International Financial Reporting Standard (IFRS) 17 on Insurance Contracts. In principle, this standard will be applicable to the 2021 consolidated accounts of quoted companies. However, in order for it to be obligatory for European insurance groups, it has to be adopted by the European Union after consultation with the European Financial Reporting Advisory Group (EFRAG).

In the second quarter of 2018, EFRAG informed the body that issued the standard (IASB) that it had identified a number of issues which in its view merited further consideration. Insurance Europe (an association which represents the big European insurance companies) issued its position on this request, asking for a delay in the planned timescale for implantation of the standard, extending it by two years. The IASB has currently allowed a delay of one additional year.

The full analysis of the sectoral prospects for the insurance market can be found in the report 2018 Economic and Industry Outlook: Fourth Quarter Perspectives prepared by MAPFRE Economics, which is available via the following link: