The strong growth recorded between 2017 and the first half of 2018 was followed by a marked slowdown of economic activity during the second half of the past year, mainly due to the confluence of three factors that impacted the world’s main economies.

On one side, the growth of China’s economy fell due to a combination of the regulatory adjustments required to curb shadow banking and the increases in trade tensions with the United States.

On the other side, the economy of the eurozone lost more impetus than expected, due to the confluence of several factors: (i) the weakening of confidence among consumers and businesses; (ii) the disturbance of automobile production in Germany due to the introduction of new emission standards; (iii) the decline in investment in Italy as sovereign risk differentials increased; and (iv) the weakening of external demand, especially from the emerging countries of Asia.

Finally, the trade tensions increasingly undermined the confidence of businesses and therefore of the financial markets, with a hardening of financial conditions for the vulnerable emerging markets in the spring of 2018 and, subsequently, in the advanced economies over the year, impacting global demand.

Global financial conditions eased in 2019 as the US Federal Reserve signaled a more accommodative monetary policy and the markets became more optimistic about a trade agreement between the USA and China. At the same time, there was a return of the pro-stimulus narrative in China, while some expectation of monetary normalization filtered through in the eurozone. Despite all of this, the financial and real conditions prevailing thus far in 2019 remain more restrictive than they were at the peak of the previous cycle, at the end of the second quarter of 2018.

Given this trend, we are confirming the forecast we made at the start of the year, namely that the growth of the world economy will fall from the 3.6% reached in 2018 to 3.3% in 2019 and 2020, on the principle of a baseline scenario of orderly adjustment. Chart 1 shows this evolution of activity and prices in a global aggregate manner. 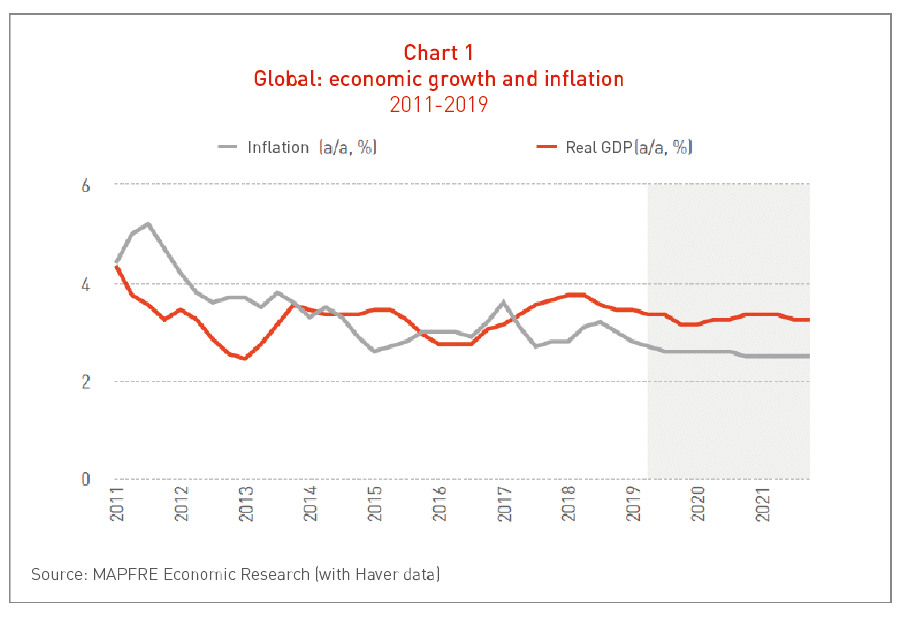 Retracing our general view by geographical area (which is examined in greater detail in the next section of this report), the dynamic of global economic activity was influenced by different factors. In the eurozone, it is expected that the pace of growth will slow. The emerging markets, meanwhile, have been playing a significant role, with regard both to the gradual stabilization of conditions in certain economies in difficulties (Argentina and Turkey) and to the renewed impetus that China’s expansionary policy and the return of a slack monetary policy in the United States could bring to the developing economies. These conditions are expected to persist beyond 2019. Conversely, activity in the advanced economies is expected to continue declining gradually as the impact of the USA’s fiscal stimulus fades away and growth tends toward the modest potential of this group of economies.

Beyond 2020, world growth is expected to stabilize around 3.3-3.4%, supported by the increase in the relative size of economies such as those of China and India, which projections suggest will see robust growth in comparison with the slower-growing developed and emerging economies (although China’s growth will slow down over time). Additionally, income and population growth and financial deepening will cause a continuing increase in the potential of these countries.

The long-term growth mentioned above is in line with a new global potential that is visibly lower than it was considered to be a few years ago, mainly due to population dynamics, the total global debt burden, and technological advances and their impact on productivity, among other factors. Thus, the weak growth of labor productivity and the slowing of the expansion of the workforce amid population aging will drag the growth of the advanced economies to a lower level over the projection horizon. The above is consistent with the thesis of “secular stagnation” that we have been advancing in the Economic and Industry Outlook reports since the end of 2016.

It is expected that growth in the emerging market and the developing economies will stabilize at slightly below 5%, albeit with variations by region and country. The reference outlook for the emerging markets of Asia remains favorable, and it is anticipated that China’s growth will gradually slow to sustainable levels, with the frontier economies converging toward higher revenue levels.

In the case of other regions, the outlook is complicated by a combination of structural constrictions, slower growth in the advanced economies, and, in some cases, a high level of debt, as well as tighter financial conditions. These factors, together with the moderation of prices of basic products (and socio-political tensions in some cases), will contribute to a moderation of the medium-term outlook especially for Latin America, the Middle East and North Africa (MENA).

Although global growth could present an agreeable surprise if trade differences are resolved quickly, allowing a recovery of business confidence and a further strengthening of sentiment among investors, the risk assessment remains downward (see Chart 2). In this regard, we reiterate the risks highlighted in our previous report: (i) risk relating to governance in the eurozone, which appears to be increasingly likely but without any increase in severity, with the United Kingdom’s participation in the European elections and the possible contagion of populism in both Finland and Poland; (ii) the risk arising from economic policy in the United States, which has filtered through thanks to the “wait and see” stance of the Federal Reserve, and (iii) the macro-financial adjustment in China, regardless of the fact that its current countercyclical fiscal policies are working and the geopolitical problems and global relationships are being maintained (the trade agreement between the United States and China is making progress, while the United States is setting its sights on the eurozone as a new economic policy objective). 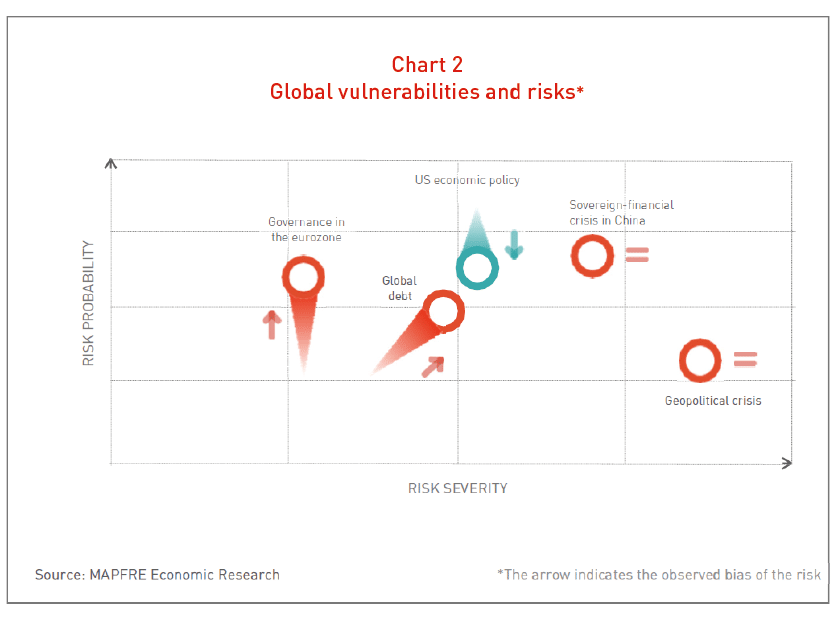 In addition to these risks, given the dominance in the narrative of the global economic policy agenda, it is essential to take account of the potential relevance for levels of global leverage, both public (in some developed countries as well as emerging/frontier economies) and private (in the case of the emerging corporate sector with high levels of indebtedness in strong currencies), of the resurgence of the credit markets (Sponsor Leverage Loans and Lite Covenant Loans) with their main niche in shadow banking. These are unknown markets, huge and strongly dependent on a rise in the cost of financing (via risk aversion or interest rates).

This constellation of risks makes it necessary to outline a negative alternative scenario. Without being comparable to the situation preceding the Lehman crisis (the tools and the state of the agents are better today), a crisis could be brought about by similar triggers (crisis of liquidity, confidence, etc.) and affect prices via expectations. This mechanism, for the purposes of the alternative scenario outlined in this report, has been modulated through a stock-market and confidence correction that would significantly reduce global growth until we are very nearly (but not quite) in recession. Although we consider the baseline scenario to be more probable, the likelihood of the alternative scenario is non-negligible.

The complete analysis can be found in the report 2019 Economic and Industry Outlook: Second Quarter Perspectives, prepared by MAPFRE Economics, available at the following link: