The protection and risk compensation process carried out by the insurance industry supports the functioning of the different sectors of the real economy by providing stability and continuity to the economic process, stimulating and making it possible to perform multiple activities and commercial transactions, providing stability to personal and family income and, in a broader sense, by supporting the generation of capital through the savings-investment process.

The insurance penetration rate (a quantitative ratio that links insurance premiums with a country’s gross domestic product) is an indicator of the way a society uses this compensation mechanism to provide stability to economic and social activity. Therefore, government authorities of many emerging countries (mostly in Latin America) have become aware of how their economies benefit from increasing penetration levels until such time as they reach levels similar to those of more-advanced economies.

The main factors on which an emphasis should be placed in order to foster the development of the insurance industry, both from the supply perspective of insurance companies and from the demand perspective of consumers and savers, are shown in Chart 1. 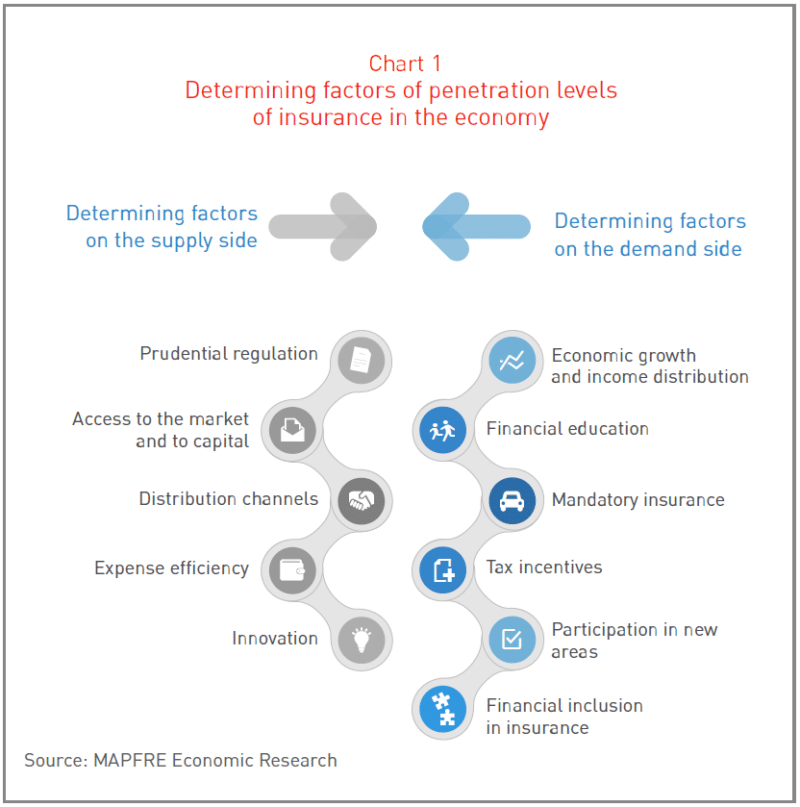 Let us briefly analyze them as far as Latin America is concerned. First off, the advance in design and implementation of risk-adjusted regulatory frameworks allows for a more efficient allocation of capital and incentivizes more professional management of insurers. Furthermore, this advance can contribute to a greater extent to the purpose of boosting insurance penetration in the economy when done gradually, and in parallel with the infrastructure required for its proper implementation.

The casuistry of formulas used to allow access to the market to new insurance companies in the region is wide, without there necessarily being a single or better solution. However, considering the concentration and competitive structure in each insurance market, some countries seem to have obtained an adequate balance between the levels of disaggregation by line for new authorizations and the corresponding quantitative minimum capital requirements.

The development of plans that facilitate multi-channel insurance distribution may stimulate supply with the creation of means that are more agile and efficient in reaching consumers, such as complementary ways of servicing new segments of the population. Logically, in the Latin American economies, this would translate into increased insurance penetration without hindering the growth of one distribution channel at the expense of another.

There is still much work to be done in Latin American insurance markets to take measures that will help reduce the operating expenses of insurance companies. The enhanced cost efficiency may widen the relative share of premiums allocated to the payment of benefits, which would aid not only in the fulfillment of the risk-pooling social role of insurance, but also in improving the public’s general perception of insurance companies in the region.

This effort implies moving forward from two perspectives. Firstly, it entails an increase in cost efficiency on the part of individual insurers, through organizational improvements and more intensive use of technology as part of risk management. Secondly, it implies also advancing at industry level in each country in order to identify and consolidate the public assets required for insurance operation, as well as the market infrastructure that can allow them to be managed so as to facilitate a more efficient operation for the sake of the companies and of their consumers.

In this last dimension, similar to what happens in the more mature insurance markets, trade and professional associations can advance in forms of collaboration that contribute, among other aspects, to designing information usage mechanisms (which can be useful when enhancing product pricing or for the underwriting of some types of risks), standardizing basic contractual contents that reduce the probability of misinterpreting the scope of coverages (reducing legal costs at market level), collaboration schemes for managing claims (in the case of the automobile sector, for example), as well as the standardization of information technology protocols that insurance companies must exchange as part of the insurance operation within markets.

Furthermore, the experience analyzed in the region indicates that it would be advisable to find more flexible mechanisms to bring new products to the market, not only so as to stimulate innovation and broaden the insurance offering, but also to offer the population timely new products that better fit their protection needs.

Regarding the factors that impact the demand side, the analysis carried out confirms that insurance demand is highly dependent on the performance of large structural factors such as economic growth and income distribution. Correlation levels between insurance activity and GDP, both in Latin America and in different regions around the world, are very high and indicate that, as long as the economy shows dynamic growth, penetration levels rise. Additionally, the negative effect of income concentration on the growth in demand for insurance services is verified.

Financial education is, also, a structural factor that can stimulate growth of aggregate insurance demand in the medium- and long-term and, with it, the elevation of insurance penetration levels in the economy. In Latin America, however, the initiatives in this matter are still limited and call for the design and implementation of better public policies.

Mandatory insurance, for its part, has several positive effects on society. First, it protects the public interest in various circumstances, mainly those related to third-party liability. Second, by linking to third-party liability deriving from a wide range of activities, it facilitates expanding insurance participation in economic and social activity. And third, mandatory insurance is an instrument that can be used to raise awareness of prevention, and thus, is a powerful tool in the financial education process, specifically in insurance. Its successful implementation does however require the existence of a solid insurance market and the execution of mechanisms to establish effective controls regarding the use of mandatory insurance by those citizens who are obliged to do so.

The effect of tax incentives on insurance demand and, consequently, on the levels of penetration in the region are also crucial. The promotion of greater complementary medium- and long-term savings is, undoubtedly, an element that could support the strengthening of pension benefit plans (under heavy financial pressure in most countries in the region), contributing also to the funding of long-maturing productive activities and thereby stimulating economic growth.

Another element that has proven relevant when increasing the penetration of insurance in the region is the opening up of participation in new areas via public-private formulas that take advantage of the technical capacity and experience of the insurance industry in managing long-term savings, and the claims originating from the risks covered through insurance contracts. A notable example is the incorporation of the insurance industry into pension plans linked to social security, or the participation of insurance in the provision of health services, which has allowed some countries to provide access to quality medical care to a larger number of citizens, either by equalizing services provided to lower-income groups with those provided by the private sector, or by enabling citizens to access a wider network of services when universal insurance systems are created.

Lastly, advancing an insurance financial inclusion strategy based on broadening micro-insurance in employment can also contribute to the development of insurance markets. This entails three core aspects: (i) identifying the risks that may affect the vulnerable groups; (ii) designing products in accordance with said risks and the groups they address, and (iii) having a regulatory framework in place that allows these products to be effectively brought to those groups within the confines of economic and social efficiency.

A key aspect of meeting this goal is the possibility of reducing transaction costs. This implies using non-traditional distribution channels, as well as technology to reduce costs not only in purchasing the product and paying the associated premium, but also in its management and renewal, and in the payment of the corresponding benefits.

The complete analysis can be found in the Elements for Insurance Expansion in Latin America report, prepared by MAPFRE Economic Research, available at the following link: