The insurance industry is one of the main sources of institutional investment in the world. By exercising this function, it contributes to the consolidation of capital via stable resource inflows for the long-term financing of projects that drive economic growth, bringing stability to the financial system by providing a steady source of financing that reduces pro-cyclicality at times of crisis.

This investment role performed by the insurance industry can be explained by the fact that its business model involves the need to implement liability-driven investment strategies in order to achieve an appropriate match in terms of maturity, interest rates and currencies between recognized liabilities and the investment instruments that back them up.

In this context, MAPFRE Economic Research has carried out an analysis of the composition of insurance companies’ investment portfolios in a variety of developed markets (the Eurozone, the United States, the United Kingdom and Spain) and of emerging markets (Brazil and Mexico), tracing the relationship in the case of the European markets with the capital risk weights imposed on each asset type under the new Solvency II regulations. The analysis identifies the major asset categories so as to facilitate comparisons among the selected markets.

In Table 1, the differing volumes of the markets analyzed can be observed, while Table 2 shows the respective proportions of traditional and unit-linked business. A higher proportion of unit-linked business is an indicator of the degree of sophistication of the various insurance markets, with the United Kingdom holding over 54% of its total portfolio in this type of product. 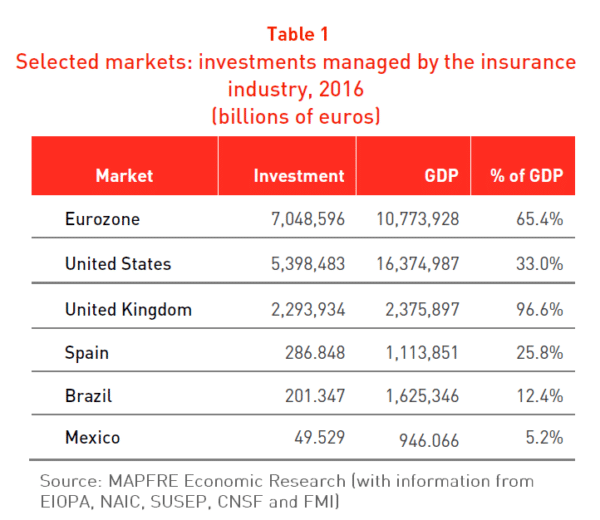 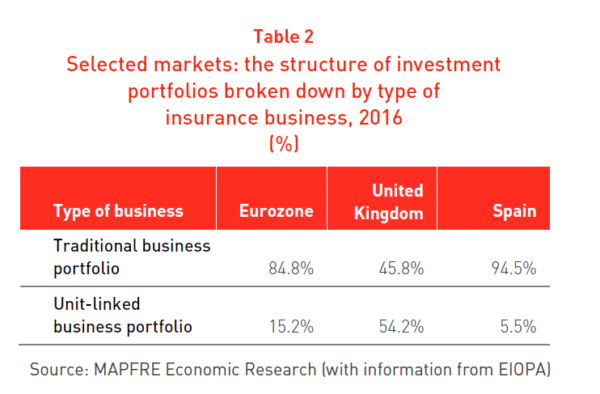 The combined value of the investment portfolios analyzed totals 15.3 trillion euros, representing significant proportions of the GDP of their respective markets, the most notable case being the United Kingdom, with a figure of 97%.

The structure of the investment portfolios in the selected markets

The analysis conducted examines the structure of the portfolios and also assesses how they have changed over the last decade. In the Eurozone, for example, unit-linked business represented 15.2% of the combined investment portfolio at the end of 2016. With regard to the historic evolution of the share of unit-linked business in the total portfolio over the period 2006-2016, the data show that this fell by 3.2 percentage points (pp), remaining at a constant level during the period following the financial crisis, contrary to what might have been imagined in the light of the context of low interest rates experienced in recent years.

Another interesting phenomenon is the trend toward an increase in fixed income investment to 64% (+7.5pp), compared with a decrease in variable income to 18% (-6.9pp). This behavior can be partially explained in terms of an anticipation of the coming into force of the Solvency II regulatory system (in 2016) and the new capital risk weights linked to the different asset types, which may have led to a trend toward the reorientation of investments, reducing the percentage of variable income and increasing the percentage of fixed income investment. The volume of assets classified under the heading “other investments” likewise increased, while this category had been used only marginally prior to then (see Charts 1 and 2). 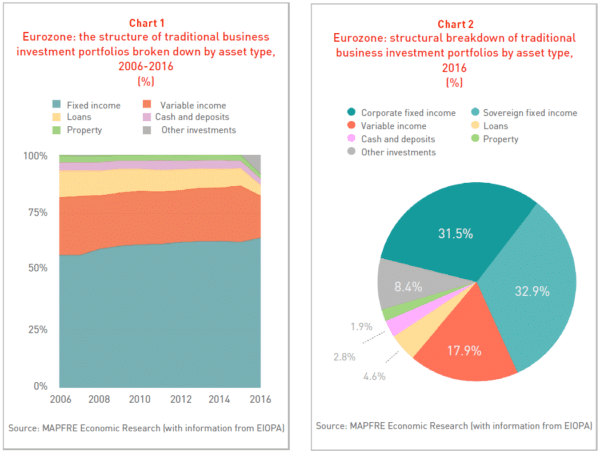 In the United Kingdom, it can be seen that the unit-linked portfolio represents 54% of total investment, with a trend toward growth in recent years, an idiosyncratic feature of this market. During the period 2006-2016, the share of unit-linked business increased by 5.4pp, showing the greatest dynamism in terms of the growth of this type of product among all the markets analyzed.

With regard to the evolution of the structure of the traditional investment portfolio during the period 2006-2016, a highly significant reorientation of investment can be seen to have taken place, with an increase in the percentage of fixed income bonds of 18.5pp and a fall in variable income of -28.7pp. This change coincided during the period 2006-2008 with the global financial crisis, with a 10.5pp fall in the weighting of variable income, and subsequently in 2015-2016 with the coming into force of Solvency II.

In Spain we observe the predominance of fixed income in the traditional portfolio, which represented 75% of the overall portfolio at year-end 2016, with over two thirds of this invested in sovereign debt. This is accompanied by a lower proportion of unit-linked portfolio business compared with other insurance markets in the Eurozone (and the lowest in the examples analyzed), representing 5.5% of the total portfolio.

Table 3 shows the breakdown of the portfolio in four large markets, and separating the fixed income into its sovereign and corporate components:

The influence of capital risk weights on the composition of portfolios

One of the aspects that seems to influence the trends observed in the composition of investment portfolios in the European Union concerns the capital risk weights applicable under the new Solvency II regulations.

In this respect a comparative study is shown below of the regulatory gross capital risk weights by asset type, as imposed on insurance companies applying the Solvency II standard formula. This shows the capital risk weights applicable to the most representative categories within insurers’ investment portfolios.

It can be observed that investment in sovereign bonds of member countries of the European Economic Area (EEA) is not subject to capital risk weights for spread risk, provided that they are denominated and financed in their own currency. It is important to point out that these percentages are applied both to direct investments and to investments implemented through mutual funds, to which the so-called look-through approach is applied.

In the case of variable income investment, the gross capital risk weight applicable to shares listed on regulated markets of the Organization for Economic Cooperation and Development (OECD) is 39% of the value of the shares concerned. This charge is subject to countercyclical symmetrical adjustments that are published every month by EIOPA.

The gross capital risk weight for market risk for property investments is 25% of the value of the property concerned. As in the case of other assets, this percentage is applied both to direct investments and to investments implemented through property mutual funds, to which the look-through approach is applied.

Furthermore, additional capital risk weights are applied if there are concentrated risks over and above specific thresholds and in the event of defective management of the risk of unbundling of cash flows and/or currency provisions between assets and liabilities.