The Latin American Insurance Market in 2019

In 2019, the Latin American and Caribbean economy grew 0.1 percent, compared to real GDP growth of 1 percent in the previous year. The region’s economic activity therefore continued to suffer the weak growth momentum of the previous five years, making the revival of economic growth both more urgent and more fraught with difficulty. It was in this challenging context that the crisis began at the start of 2020 as a result of the lockdown and social distancing measures implemented to tackle the COVID-19 pandemic. This was accompanied by the fall in the price of oil, other raw materials and commodities, in addition to significant turbulence in the foreign exchange markets and foreign investment flows, making the economic outlook extremely complex in 2020.

In 2019, total insurance premiums in Latin America and the Caribbean amounted to 153.05 billion US dollars, of which 54 percent came from Non-Life insurance and the remaining 46 percent from Life insurance. Insurance market performance in the region has seen a year of increased contrast in which the economic climate has affected the two major insurance business segments differently. The region’s relatively stagnant economic situation continues to impact the performance of the Non-Life segment, which saw a drop in premiums of -1.1 percent at the aggregate level. The Life business, however, performed exceptionally well, with growth of 5.1 percent (see Chart 1), aided by a favorable interest rate environment that offset the negative impact of the economic cycle on its development. 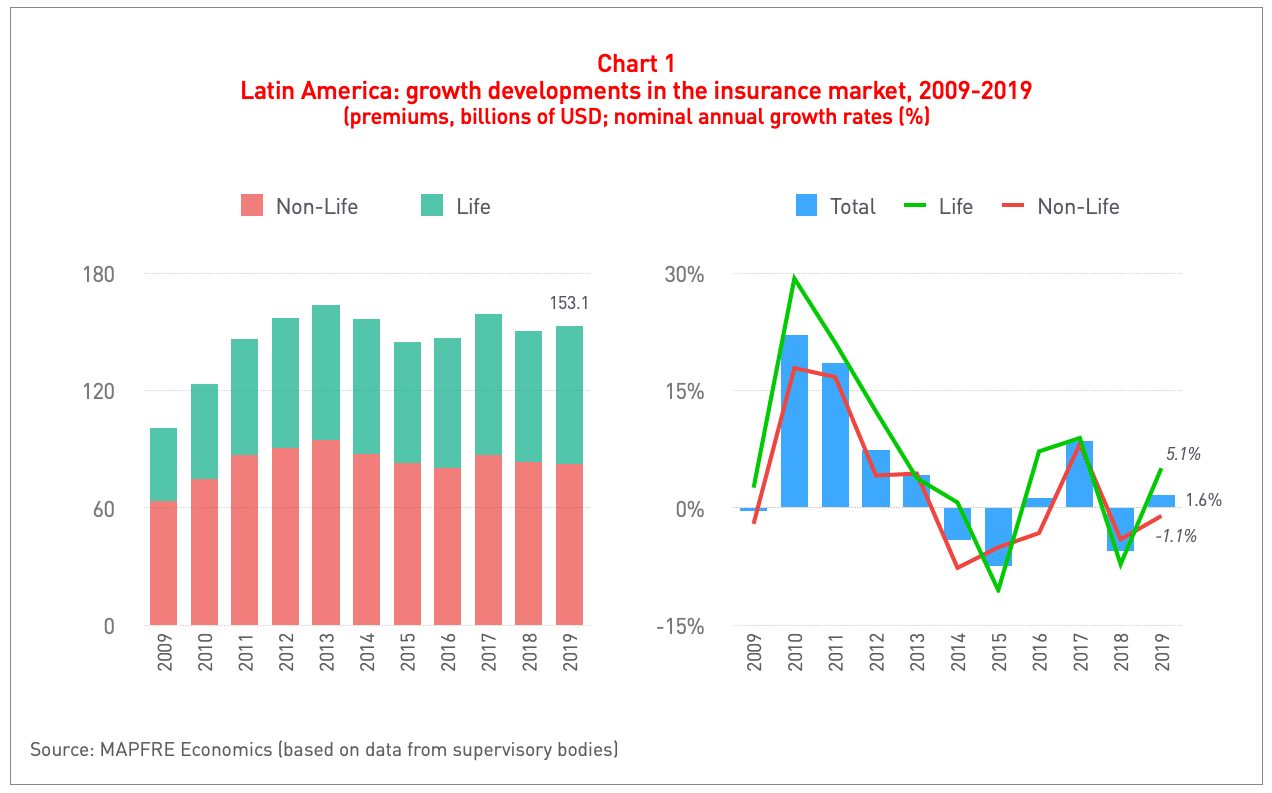 The widespread application of expansionary, accommodative monetary policies by virtually every country in the region is starting to leave the time when interest rates were high in the rearview, by producing sharp falls in short-term risk-free interest rates, with rate curves beginning to show positive slopes, in some very significant markets, such as in Brazil. Expectations of further declines in interest rates and the possibility of offering medium- and long-term interest rates higher than short-term rates (term premiums) have created a favorable environment in the region’s main markets for marketing Life annuity and Life savings insurance at guaranteed interest rates, which has been reflected in the good performance of their respective markets, despite the environment of low economic growth.

Given this context, with the exception of the insurance markets in Argentina and Chile, the region’s major markets by premium volume performed well in 2019 (see Chart 2). 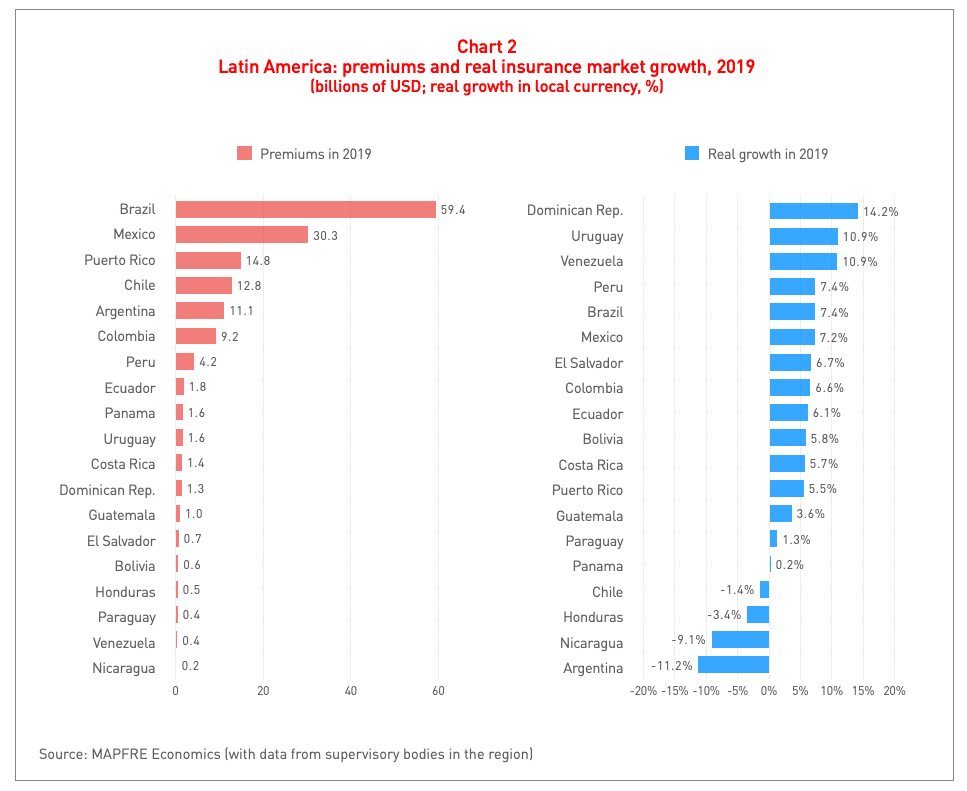 The markets in Mexico and Peru stand out in particular — they experienced exceptional growth measured in real terms both in their local currency (7.2 percent and 7.4 percent, respectively) and in US dollars (11 percent and 8 percent, respectively), with balanced growth in the Life and Non-Life segments. The Brazilian and Colombian markets also showed considerable real growth in their respective currencies (7.4 percent and 6.6 percent, respectively), although these figures were significantly lower when measured in US dollars (3.1 percent and -0.6 percent respectively). The growth in the Brazilian insurance market was thanks to the positive performance of the Life business, given that the Non-Life business experienced a slight decline in real terms. Among the other countries considered, Central American and Caribbean markets—with the exception of Nicaragua, Honduras and, to a lesser extent, Panama—also stood out for their good performance. Among the Andean states, the markets of Bolivia and Ecuador also stood out for their good performance.

As in other years, a positive note in 2019 for the region is the aggregate net result for the insurance industry, which experienced a growth of 13.5 percent compared to the previous year, amounting to 13.46 billion US dollars. Profits in US dollars were down year on year in the insurance markets of Argentina (-6.5 percent), Chile (-28.1 percent), Costa Rica (-22.6 percent), El Salvador (-2 percent), Nicaragua (-13.4 percent) and Paraguay (-0.2 percent), while all the other countries in the region reported growth.

Among the structural trend indicators, the average penetration index (premiums/GDP) of the insurance industry in the region stood at 2.9 percent in 2019, which was slightly higher than the previous year’s index by 0.08 percentage points (pp). This indicator improved in the Life segment (1.4 percent, compared to 1.3 percent in the previous year) and remained unchanged in the Non-Life segment (1.6 percent). An analysis of the changes in this indicator since 2009 shows that there has been an increase of 0.5 percentage points, again confirming the growing trend we have seen over the last ten years, to which the development of the Life insurance segment contributed almost exclusively and that of the Non-Life insurance segment very slightly (see Chart 3). 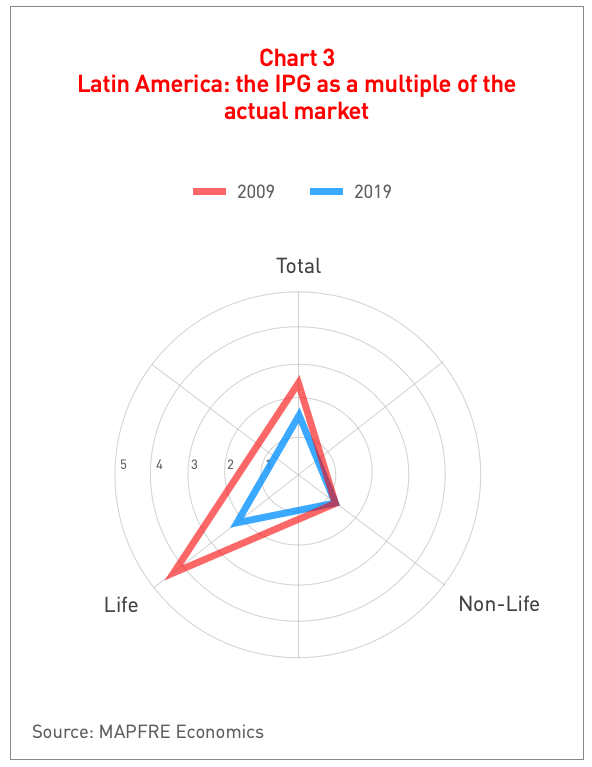 Finally, the comparison of the different countries in the region, in terms of penetration, density and depth—indicators that measure the level of development of their respective insurance markets—is shown in Chart 4. 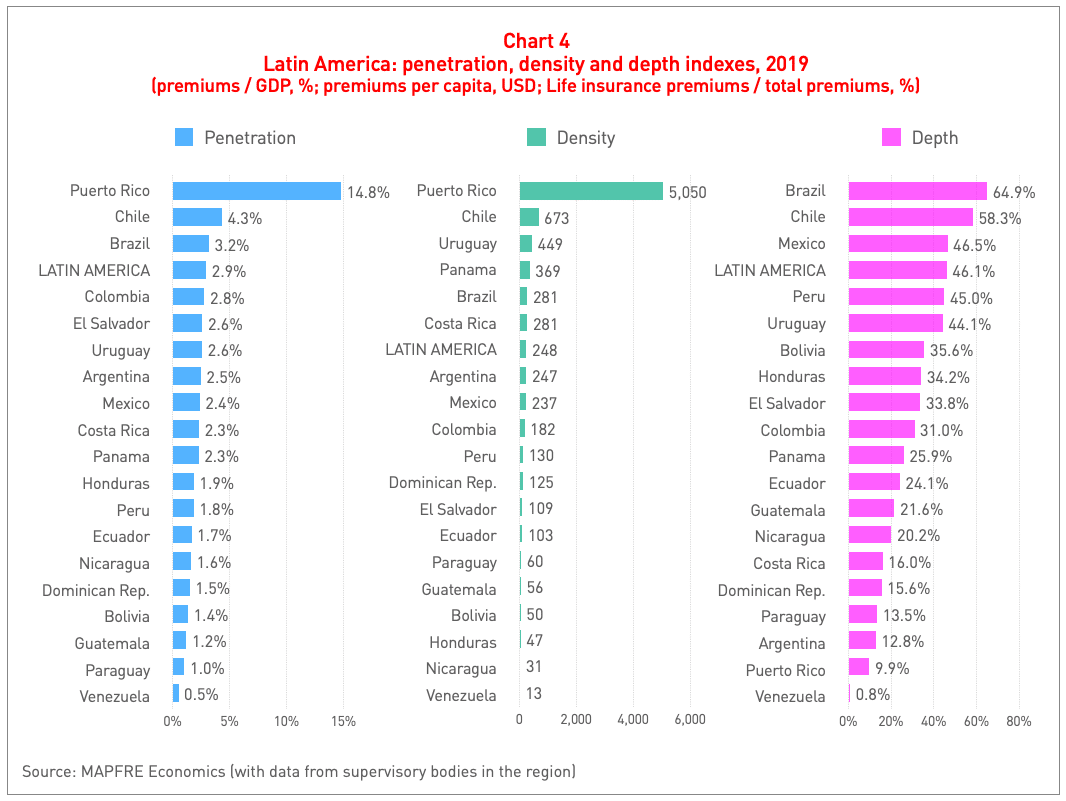 The full analysis of the structural trends and behaviors of the region’s insurance industry can be found in the report The Latin American Insurance Market in 2019, prepared by MAPFRE Economics, available at the following link: