The deceleration predicted in global economic growth in 2019, the halt in monetary normalization in the United States (see Chart 1) and the return to more accommodating monetary policies in some of the major world economies point to a slowdown in insurance business growth worldwide. The monetary and fiscal policies being adopted in some countries could ease the impact on the economy and on the insurance industry, but for now a slowdown is anticipated. 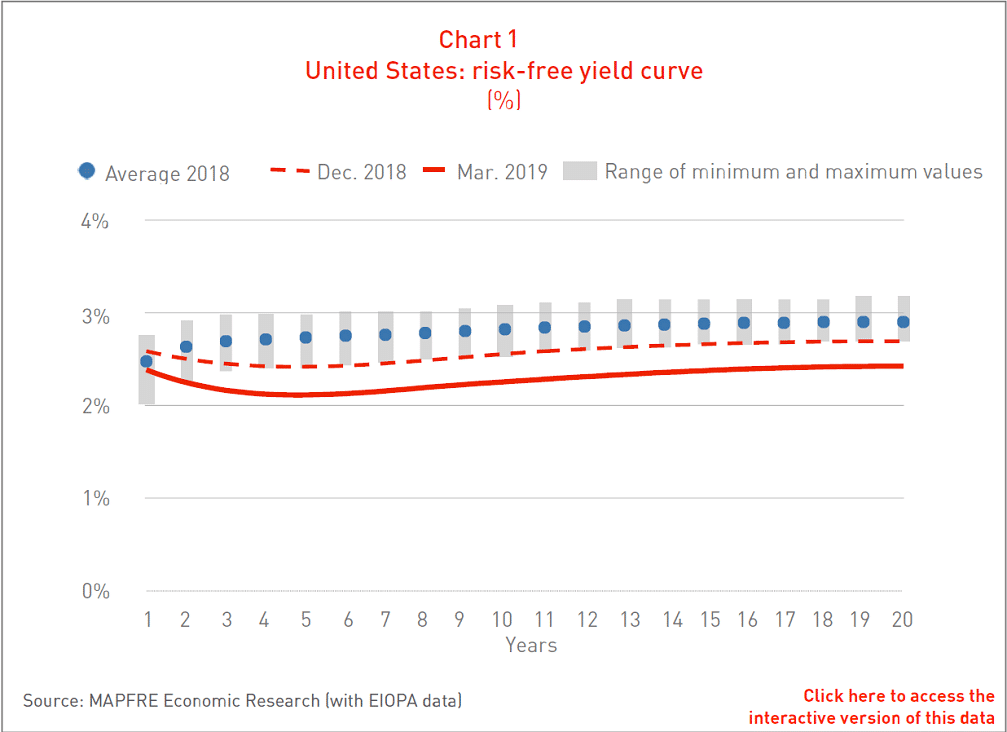 In the Eurozone, the downward revision in growth outlook has been even more marked, which could translate into a major slowdown in Non-Life and Life risk insurance business. In addition, expectations of deceleration and low inflation have led the European Central Bank (ECB) to adopt a more accommodating line in its monetary policy statements; as it is not expected to raise interest rates before 2020, the ECB has not made any decision for the moment regarding the normalization of deposit rates, even in negative territory. The low interest rate environment will continue to hamper progress in Life savings and annuity products.

In Spain, the trend toward a smooth slowdown of the economy continues, albeit less than forecasted for the Eurozone overall, so expectations continue to be favorable for development in Non-Life and Life risk business lines, although they are tending to slow down. As for Life savings insurance and conventional annuity insurance, the low interest rate outlook persists, which will continue to weigh on this business as in the rest of the Eurozone.

On a positive note, control over inflation and currency depreciation achieved in emerging economies in the first quarter of the year is noteworthy in certain economies such as Brazil and Mexico, which is good news for development in their respective insurance markets. Other economies such as Argentina and Turkey still need to tackle the structural reforms required to control major economic variables in the medium-term.

Regarding major regulatory trends, in the European Union, it is worth noting that on March 8 of 2019, the European Commission adopted the amended Solvency II Delegated Regulation (EU) 2015/35, which affects certain aspects of the calculation of the Solvency Capital Requirement under the standard formula. The European Parliament and the Council have a three-month period to draft objections. If they do not do so, the changes will enter in force 20 days after their publication in the Official Journal of the European Union. Also, on April 4 of 2019, the European Parliament formally adopted the text of the Regulation on a pan-European Personal Pension Product (the PEPP Regulation).

At worldwide level, on April 4 of 2019, the International Association of Insurance Supervisors (IAIS) released the comments received on “ICS Version 2.0,” the new version of the future Capital Global Standard. The IAIS launched a new field analysis on April 30 to assess the various options and issues that are still pending, particularly the valuation of assets and liabilities, consideration of benefits of diversification in capital risk weights and the treatment of the tax effect, among other items. ICS Version 2.0 is scheduled for adoption in November 2019.

The complete analysis of the industry prospects for the insurance market can be found in the report 2019 Economic and Industry Outlook: Second Quarter Perspectives prepared by MAPFRE Economics, which is available at the following link: