The Spanish Insurance Market in 2019

In 2019, prior to the deep recession brought about by the pandemic, Spain’s economy was showing a gradual slowdown, which was impacting the growth of the insurance industry. As a result, economic growth in that year was 2 percent (compared to 2.4 percent in 2018), while total insurance premiums fell 0.4 percent, compared to 1.5 percent growth in the previous year (see Chart 1). The premium volume in 2019 was 64.5 billion euros, representing 5.15 percent of GDP that year (compared to 5.33 percent of GDP in 2018). 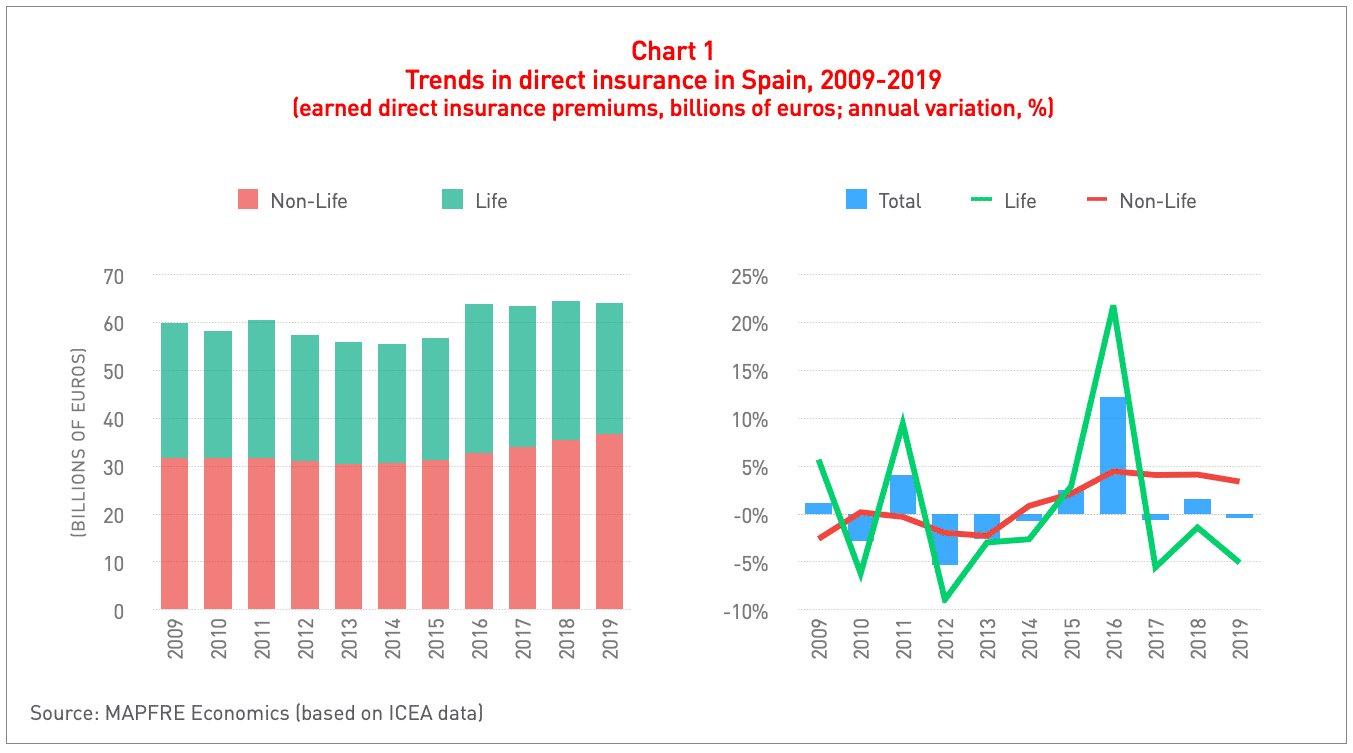 The main reason for the decline in the insurance industry in 2019 stemmed from the poorer performance of Life insurance, which fell 5.1 percent. By contrast, growth in Non-life insurance slowed but remained positive at 3.4 percent (compared to 4 percent in 2018). For another year running, Life insurance was negatively impacted by the backdrop of low interest rates as well as the economic slowdown, which negatively affected Life savings product premiums. However, despite the fall in premiums, the volume of managed savings stemming from Life insurance did not decline, instead growing 3.4 percent.

As 2020 progresses, the latest data from ICEA (Investigación Cooperativa entre Entidades Aseguradoras y Fondos de Pensiones — the research arm of the Spanish insurance industry) for the first nine months of the year reflect the impact experienced by the insurance industry as a result of the sharp economic downturn brought about by the pandemic. This includes a drastic fall in Life insurance premiums (down 25.8 percent) along with a marked slowdown in the Non-life business, which nonetheless experienced aggregate growth of 0.65 percent. Conversely, managed savings in the Life business continue to show resilience, reaching 192.9 billion euros, which represents a slight downturn of 1 percent.

As a result, the patterns of behavior currently being seen in the insurance industry are beginning to show marked similarities to those observed during the 2007–2009 crisis. During that time, GDP fell 3.8 percent (in 2009), which drove a decline in premiums in the insurance industry of 7.8 percent and 10 percent in the Non-life and Life businesses respectively in real terms in 2010. Amid the current crisis, Life is the most affected business line to date (down 27.8 percent in premiums and down 0.75 percent in managed savings). However, some insurance lines within the Non-life segment, such as health insurance and multirisk (especially for homeowners) have shown great resilience, much as they did during the 2007–2009 crisis. The 2007–2009 crisis continued for several years, being linked to the eurozone sovereign debt crisis. Once economic recovery began, all Non-life business lines experienced significant growth (see Chart 2). 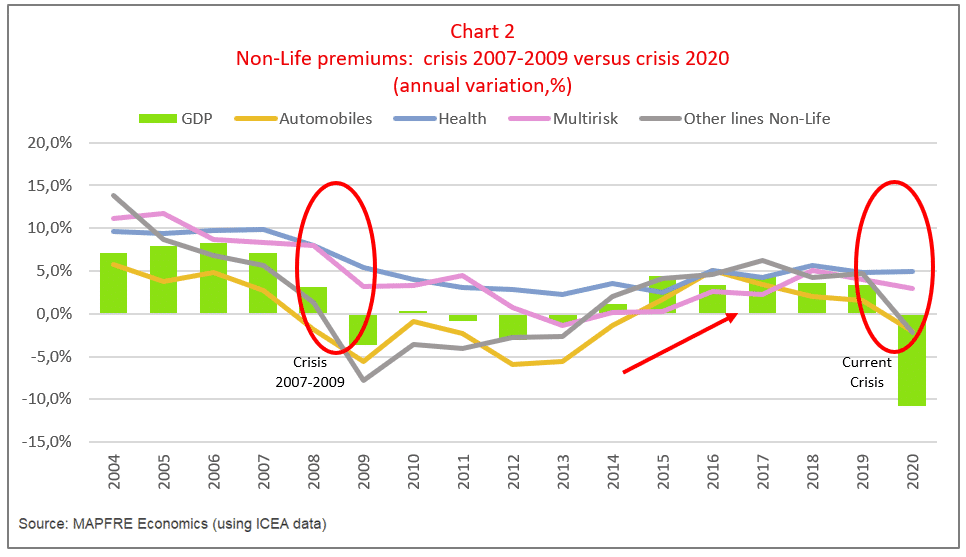 Automobile insurance remains the line with the largest premium volume in the Non-life insurance segment, accounting for 30.9 percent at the close of 2019 (See Table 1 for details). The data up to September 2020 shows a 2 percent downturn in automobile insurance premiums compared to the same period in the previous year. 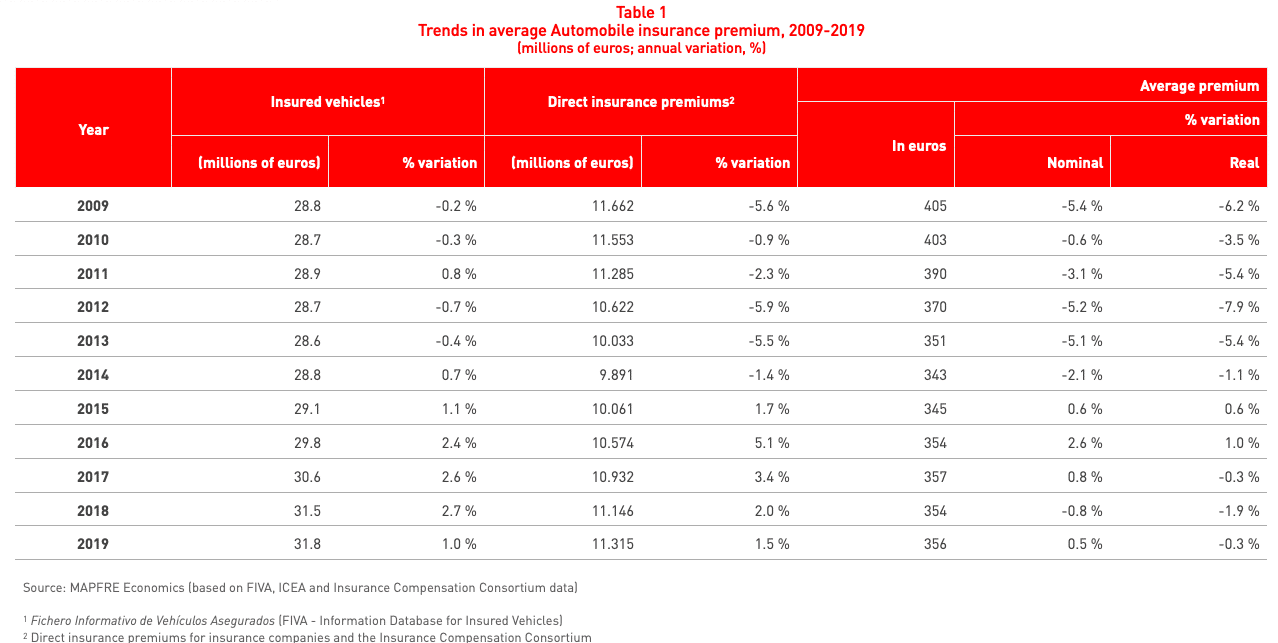 In terms of profitability, the combined ratio for the Non-life insurance segment in 2019 continued to improve, as seen in recent years, standing at 92.9 percent (see Chart 3). This great improvement in technical profitability continues to allow the Spanish insurance industry to largely compensate for the profit losses experienced by investment portfolios in recent years given the backdrop of low interest rates. 2019 even saw a positive rebound in the profitability of investment portfolios at sector level, as a result of market spreads in fixed income portfolios being relaxed. This had an impact on the valuation of these portfolios, although the trend remains downward (see Chart 4). 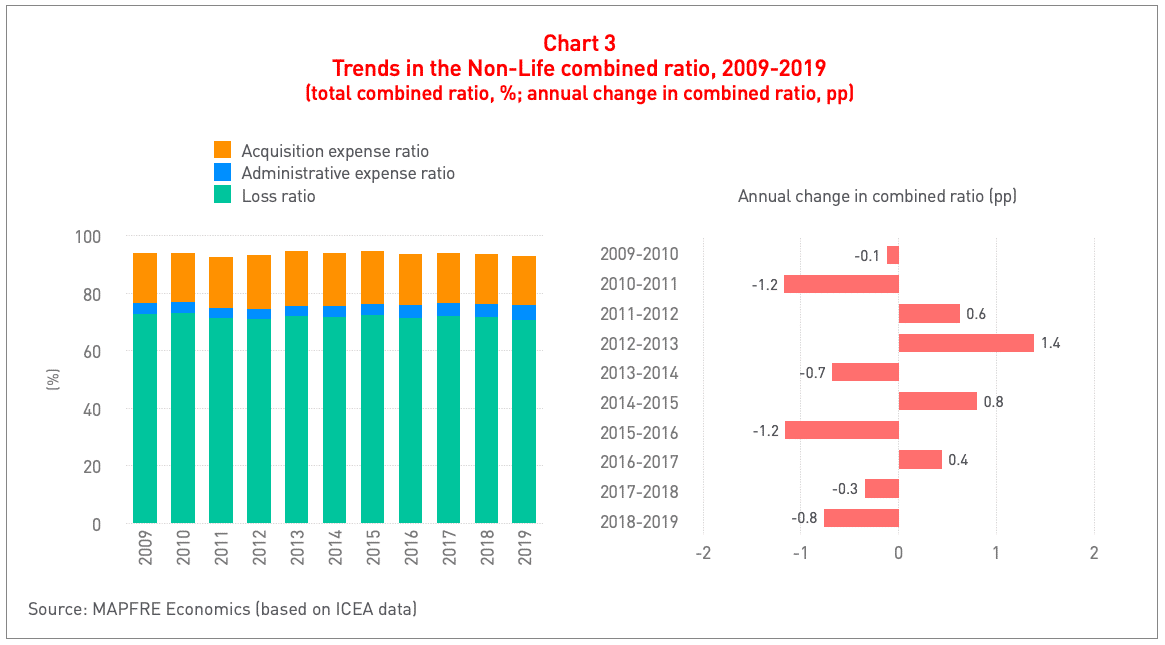 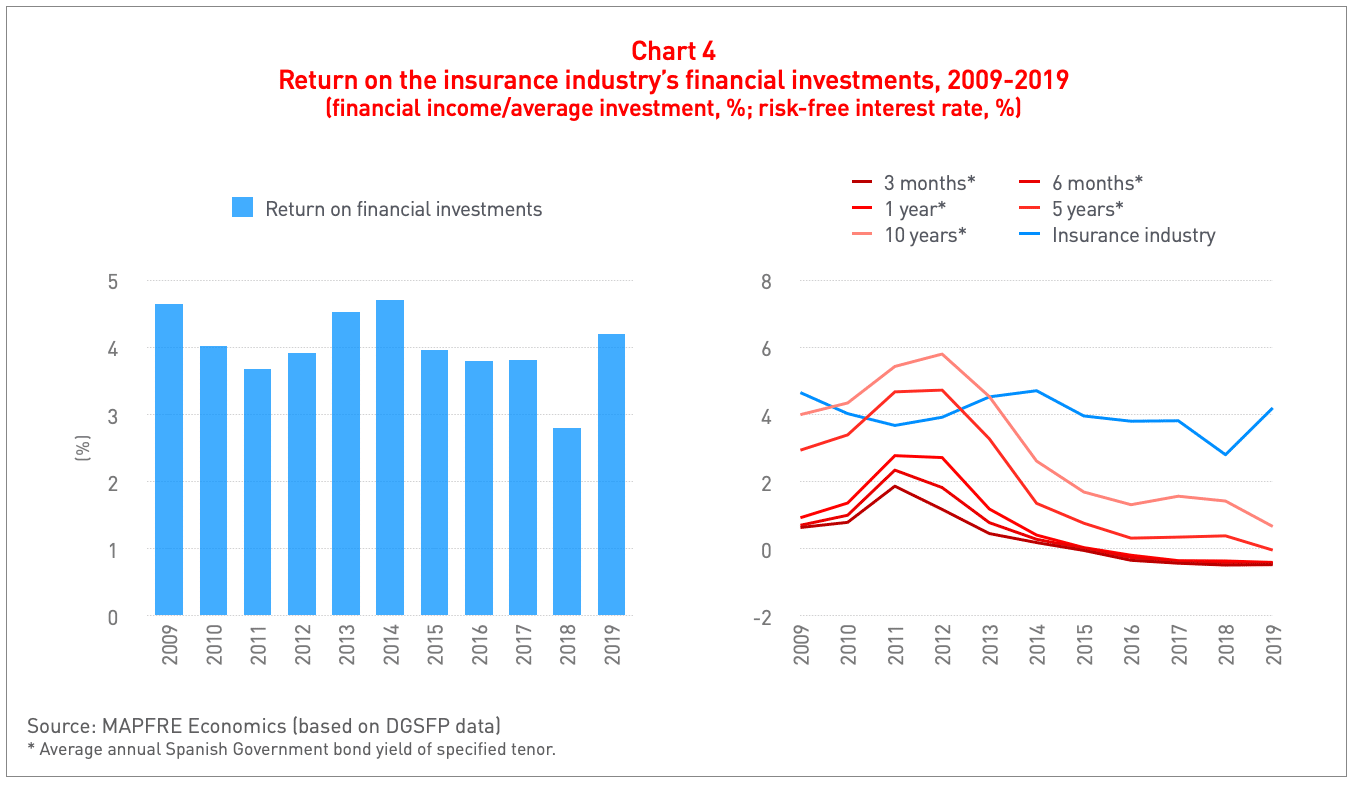 Conversely, the insurance industry recorded slight falls in penetration, density and depth indices compared to the previous year. Non-life insurance saw a slight increase in penetration and density, however this was not sufficient to compensate for the downturns in the Life business and these indicators remain below their corresponding averages for the 15 major European Union economies (see Chart 5). 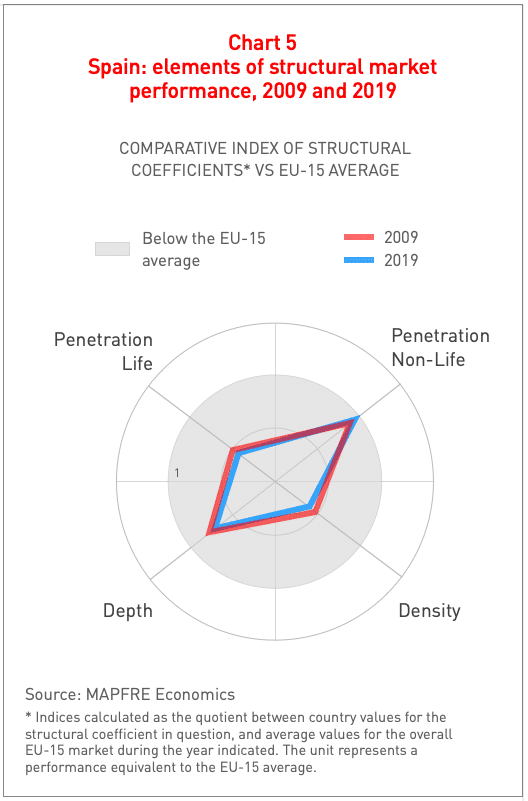 A detailed breakdown of the different business lines and structural trends over the last decade can be found in the report on The Spanish Insurance Market in 2019, compiled by MAPFRE Economics and available from the following link: