A global perspective on Pension Systems

Retirement pension systems are always exposed to great pressure to reform because of several factors that can be grouped into two large blocks: the first covers those related to the lack of sufficiency of pensions (to maintain a certain standard of living after retirement) and the second group includes those factors that have their cause in medium- and long-term sustainability problems.

The block of factors related to pressure due to the lack of sustainability includes demography, especially for pension systems in which the distribution components (in which ongoing pensions are financed from the contributions of active workers) have a higher weight. A key indicator for assessing the degree of pressure that demographic dynamics exert on retirement pension systems is the “support ratio” or “workforce ratio per retiree”, which measures the number of working-age individuals for each individual who has reached retirement age.

Due its structure, the ratio of workforce for each retiree allows for various metrics. The most used metric has the workforce of the population between the twenty and the sixty-five years old. This is because they are the ages at which people in a position to work are entering and leaving the labor market on average (the 20–64/65+ “support ratio”).

The United Nations population databases provide estimates and forecasts by age group from 1950 to 2100 for a total of 201 countries. Based on these, Chart 1 presents a demographic pressure index on retirement pension systems considering two elements: 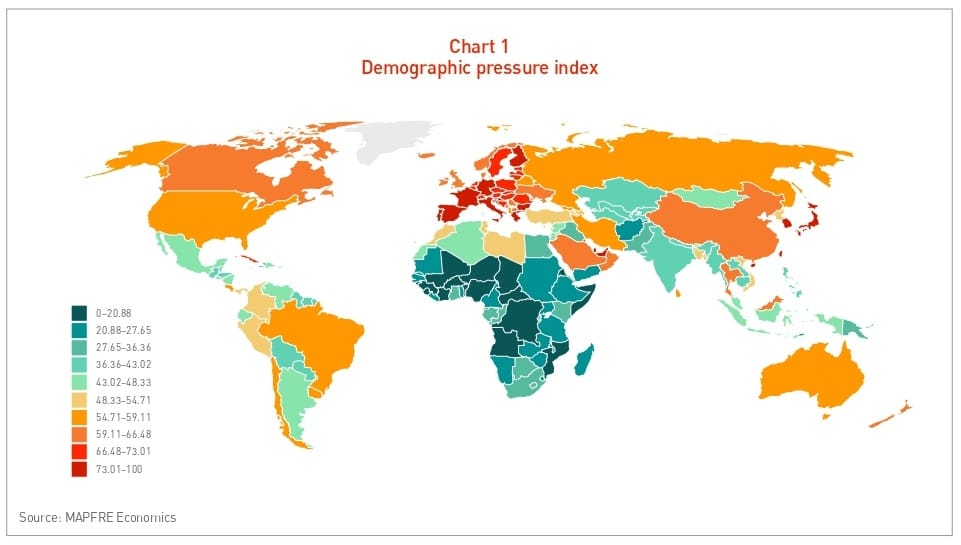 As can be seen, the Southern Europe region and, in general, Western Europe are showing the greatest demographic pressure. This is mainly because these regions have the lowest ratio of people in the workforce who have reached retirement age, which is around 3 working-age individuals per person over 65 on average. This ratio, according to the latest United Nations forecasts, will continue to deteriorate in the coming decades to fall below 2 in 2050 and around 1.5 by the end of the century. In contrast, the regions of Western, Central and Sub-Saharan Africa have the lowest rate of population pressure, followed by the South Asian region. In terms of breakdown by country, Japan has the highest demographic pressure.

It should be noted that, for the time being, these forecasts do not yet take into account the effect of the mortality caused by the COVID-19 pandemic. However, given the virus fatality rates observed to date, deviations that will significantly alleviate the demographic pressure on pension systems derived from these forecasts are not expected.

Although demography is fundamental, it is not the only factor influencing pressure on pension reform. There are other factors that play an important role when it comes to proposing reforms and the pressure there is for them to be approved.
The synthetic index, entitled the “Pressure Index for reforming Retirement Pension Systems (IPSPJ)”, developed by MAPFRE Economics, seeks to measure that pressure based on six indicators. Three of them are related to the pressure that the lack of sufficiency of the pensions exerts on the public authorities to take action to reform them and the other three factors are related to their lack of sustainability (see Table 1). 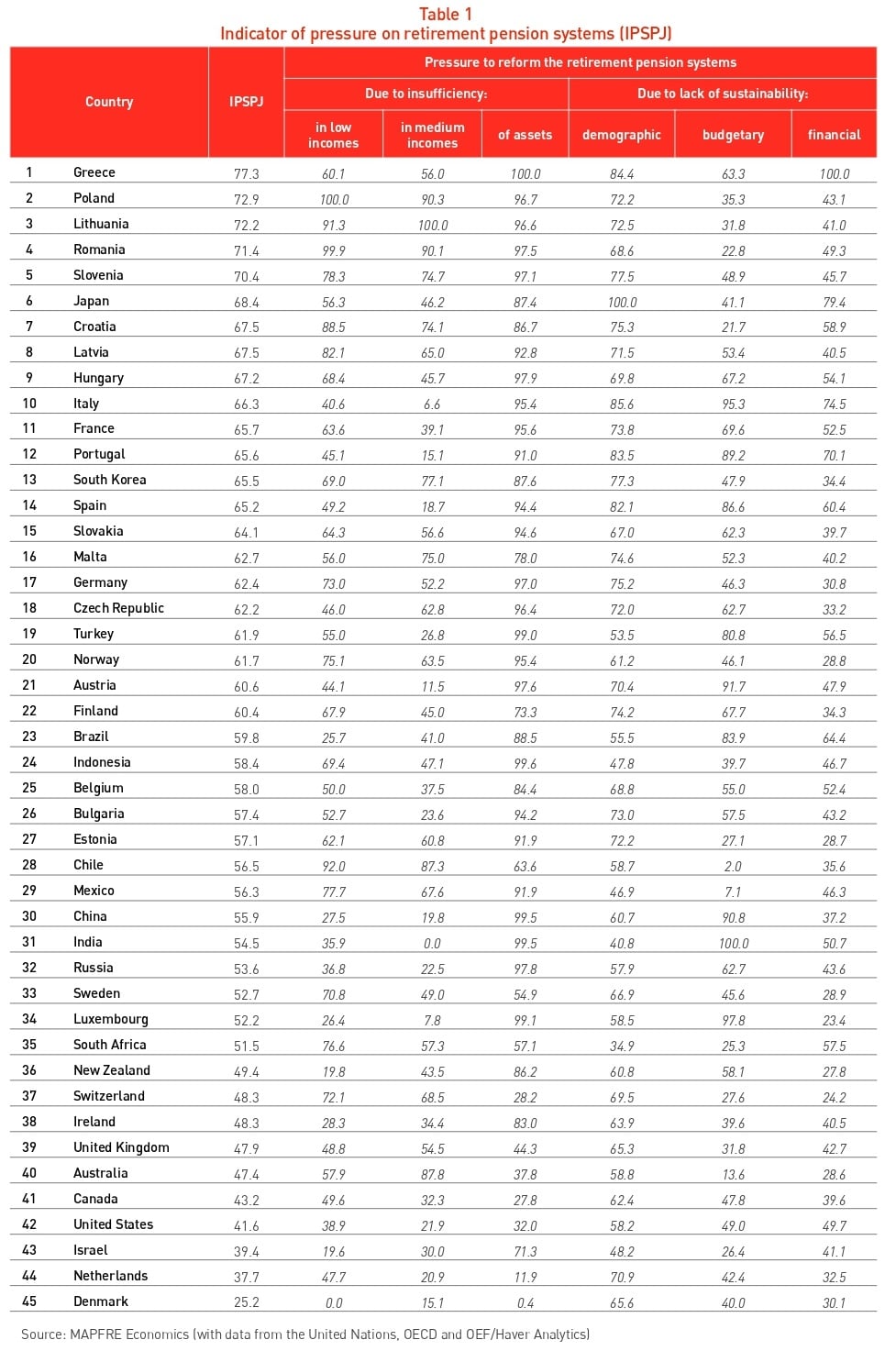 The current direction of the retirement pension system reforms

After analyzing in-depth the reforms implemented in eleven pension systems over recent decades (which cover the spectrum of the main models that are often taken as a reference when considering reforms), the most common parameters on which the reforms focus are shown below:

Other reforms related to the management of pension systems

It should also be noted that all the reforms analyzed have taken additional measures to redistribute the risks arising from the operation of their systems, to a greater or lesser extent, among the various parties. They have introduced public control mechanisms to prevent mismanagement of risks due to inadequate functioning of the system that may lead to situations where people who reach retirement age suffer consequences in the form of lower replacement rates.

The development of these mechanisms is important and the latest reforms tend to involve to a greater extent public institutions that are given greater supervisory powers. The measures analyzed include, but are not limited to:

The comprehensive analysis of the exogenous factors and risks affecting retirement pension systems, public policy measures, IPSPJ structure, and the in-depth study of systems in the United States, Brazil, Chile, Sweden, United Kingdom, Germany, the Netherlands, France, Spain, Japan and South Korea can be found in the “A global perspective on pension systems” report, prepared by MAPFRE Economics and available at the following link: