The context of current world economic growth makes it possible to be optimistic with regards to the development of the insurance market at the global level. The forecast for economic growth of around 3.8% (compared with 3.7% in 2017), which is solid and synchronized across all major regions, is estimated at above 2% for developed economies and around 5% for emerging economies.

This strong global growth, combined with moderate inflation, will have a positive influence on the insurance industry, the development of which is very much tied to the trends of the economic cycle. The insurance industry of emerging markets will benefit in particular, where the low level of insurance penetration in the economy also causes the elasticity of growth in insurance demand to be greater than in more developed economies, meaning that weak or moderate GDP growth tends to result in greater growth in insurance policy premiums.

In some developed economies, the persisting context of low interest rates continues to act as a ballast for the Life, Savings and Life Annuity business lines, which may be damaged despite solid economic performance. The lax monetary policies imposed by the central banks of the Eurozone and Japan continue. In the Eurozone, considering the predicted schedule for monetary normalization, there is no expected rise in interest rates until late 2019. Decreases in purchase programs are expected to be very gradual, with the aim of avoiding any undesired consequences, such as sudden increases in the cost of financing debt and possible over-valuations of assets that may occur, which would have a negative impact on the results of the insurance industry, among other sectors. Nonetheless, it is a latent risk (Chart 1). 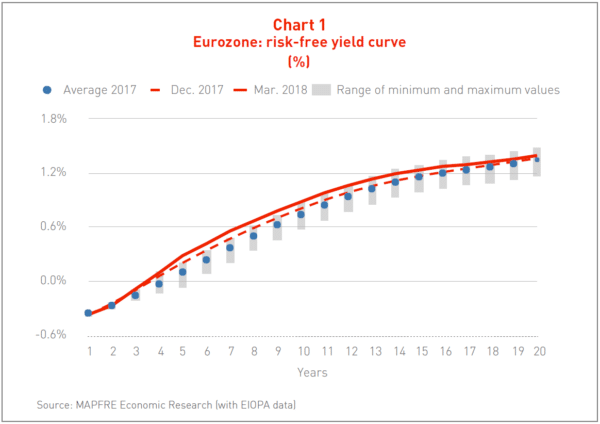 In the United States the normalization of monetary policy has already occurred, but neither the said normalization nor the protectionist measures adopted have significantly affected its economy, the markets or world trade, at least for now. This is good news for Life Savings and Life Annuity insurance in the US, although its impact may not be immediate. The flattening out of the interest rates curve, a sudden rise to such, or expectations of future rises may be damaging in the short-term, given that it takes insurance companies time to adjust the new products and rates guaranteed in their portfolios. In this context, the demand for savings products may slow as rises occur, and this may give rise to the surrendering of policies sold at lower-than-market rates (Chart 2). 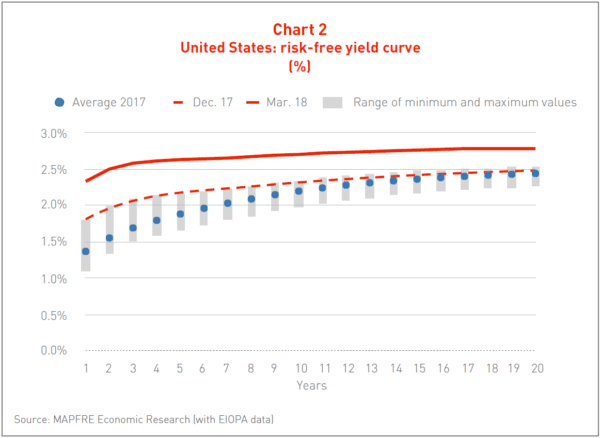 A further nuance to single out is that the strength of the dollar, together with twin structural deficits (in both fiscal and current account terms) in some emerging countries, is having a negative influence on their economies, combined with the effect of high oil prices in non-producing countries. The persistence of this situation could result in a loss of the synchronized global growth that we are currently experiencing.

As far as Non-Life insurance premiums go, we maintain our forecasts in the sense that developed markets may experience growth of around 2.7% in 2018, with around 7.5% for emerging markets.

In addition, it is confirmed that the second half of last year was a historic period with respect to the catastrophic losses incurred as a result of disasters caused both by nature and by man. According to the first preliminary estimates, losses should come in at around 337 billion dollars for 2017, of which the total amount insured is 144 billion dollars, the largest figure ever registered. The strong capitalization seen to date in the reinsurance sector has supported the downturn seen in profitability. Nonetheless, the major impact of the latest disasters on its accounts and balance sheets has put reinsurance premiums under pressure, especially in a market that has become excessively competitive on price in the absence of significant disasters in recent years.

With respect to the major regulatory trends, the International Association of Insurance Supervisors (IAIS) has made significant progress in the revision process of the core principles applicable to the supervision of internationally active insurance groups (IAIGs) and global systemically important insurers (GSIIs).

With regard to the digital environment, EIOPA, together with the national supervisors and the insurance industry, is currently developing a qualitative exercise on cybernetic risk in a bid to increase knowledge of this emerging risk, which it has decided to consider as strategic. This activity is in line with others developed by the European Securities and Markets Authority (ESMA) and the European Banking Authority (EBA) with the objective of not only gaining greater in-depth knowledge of the risk involved, but also of encouraging financial institutions to take action to improve the vulnerable aspects of their systems.

In the insurance distribution field, on March 14, the European Parliament and Council approved a Directive that modifies the term for the transposition of the new insurance distribution Directive, extending it until October 1, 2018. In Spain, on May 11 the Council of Ministers approved the Draft Law for the Distribution of Insurance and Reinsurance Policies, which was published in the Official Gazette of the Spanish Parliament on May 21, thus initiating its passage through the country’s parliament.

The full analysis of the sectoral prospects for the insurance market can be found in the report Economic and Industry Outlook 2018: Second Quarter Perspectives prepared by MAPFRE Economics, which is accessible via the following link: