The arrival of the COVID-19 pandemic has radically altered the world’s socio-economic and political landscape. Transmission, coupled with the suppression measures imposed across the world (social distancing and lockdown), has produced supply and demand shocks of unprecedented dimensions. In addition, the oil market has tightened up, putting additional pressure on certain economic sectors, in both developed and emerging countries.

MAPFRE Economics’ new global growth forecasts have dropped from 3.1 percent at the start of the year to a global GDP contraction of between –3.0 percent (baseline scenario) and -8.2 percent (adverse scenario). These scenarios may vary depending on the impact of the virus and the suppression or containment measures taken (see Table A-1). 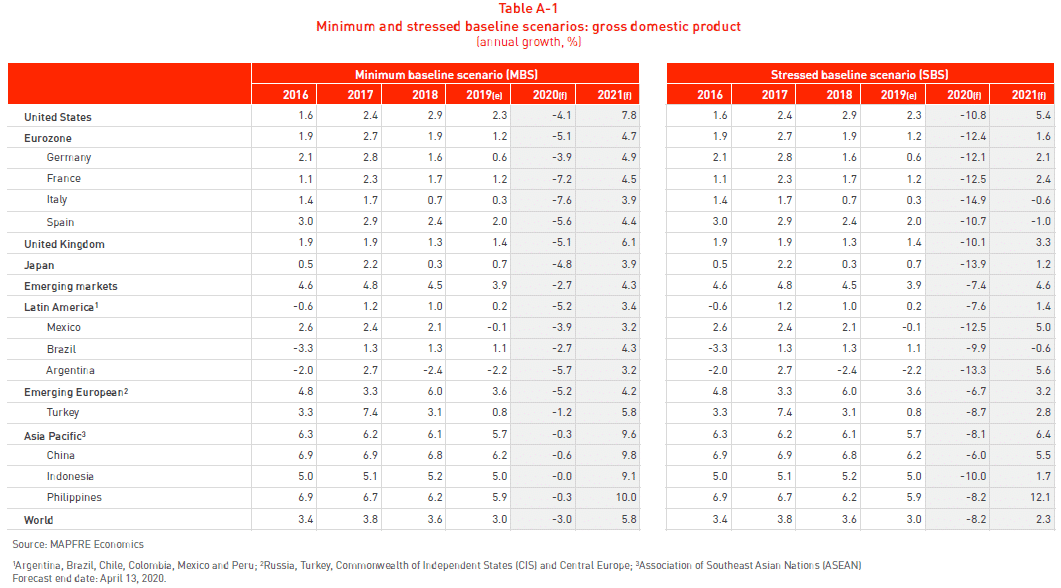 A particular set of circumstances have been taken into account for the baseline scenario. These include the fact that Chinese activity has been recovering in the second quarter, primarily benefiting Asian economies. The crisis is not creating a solvency problem in the developed world, nor is it leading to any unexpected risk. Under this scenario, liquidity is restored, solvency remains intact and there are no large asset depreciations. Oil will return to around USD 40/barrel by the end of 2021. The value of the US dollar remains below 1.1 USD/EUR.

A different set of circumstances have been taken as a reference for the adverse scenario. These include the virus affecting more countries for longer and much more severely, hitting the finance sector in countries such as emerging Asia and Latin America; global trade contracting by 15 percent in 2020; the price of oil remaining below USD 15/barrel; and a collapse in capital earnings, leading to sharp changes in the market valuation of many assets on the balance sheet. The role of safe havens would increase, accumulating liquidity and pushing down interest rates, further damaging the financial system.

So far, there has been a global synchronicity in the relaxation of monetary and financial conditions. However, this has been markedly less coordinated and more irregular way in terms of fiscal policy measures. These include direct and indirect stimuli, and guarantees that have ranged from 15 percent of GDP in some countries to 2 percent in others. The report’s baseline scenario of economic growth and inflation is therefore very negative for developed countries and even more so for emerging markets. This is due to the vulnerabilities accumulated over the last decade and the sharp contraction in foreign revenue, especially because of the falling oil price.

Based on the healthcare strategies implemented by most countries, economic costs would clearly be much higher if monetary and fiscal support measures had not been adopted, and the (temporary, for now) damage would likely become permanent. These measures have been aimed at preventing the collapse of aggregate demand (liquidity, solvency, employment), returning flexibility to factor markets, and building firewalls between the real and finance sectors to avoid repeated flare-ups that reinforce cyclical deterioration (bankruptcies, sovereign tightening, etc.). The success of these measures will see either a more or less orderly (U-shaped) exit from the current crisis, or a new (L-shaped) equilibrium of lower growth and sustained loss of prosperity. These alternatives represent the two possible scenarios laid out in the MAPFRE Economics report, a central baseline (“U”) and an extreme scenario (“L”).

Economic policy options to avoid the aforementioned scenarios fall into four categories: (i) institutional and regulatory coordination aimed at boosting the recovery of the sectors most affected by lockdown measures; (ii) monetary measures aimed at providing liquidity, ensuring the stability of the financial system’s balance sheet, and accommodating fiscal policy measures; (iii) fiscal measures aimed at financing the health shock, sustaining incomes and investing in the potential of economic growth by using large-scale existing multipliers; and (iv) searching for funding mechanisms and pooling the cost of the crisis with a view to seeking sufficient fiscal space (domestic, international, or multilateral).

Finally, the current risk map remains similar to the one in the Economic and Industry Outlook 2020 report. However, it is no longer characterized by potential catalysts for recession, rather by factors that may aggravate the current scenario. This would result in the current U-shaped recession entailing a change of equilibrium, characterized by a (L-shaped) depression, from which, given the dislocation of the finance sector after a systemic event, a return to normal is no longer possible.

The complete analysis can be found in the report 2020 Economic and Industry Outlook: Second Quarter Perspectives, prepared by MAPFRE Economics, available at the following link