Global vision in the baseline

In 2017, solid growth was seen in virtually all regions across the globe (around 3.6% YoY globally) with developed economies growing by 2% and emerging economies close to 5%. The evolution of inflation was also benign (see Charts 1.1-a and 1.1-b). In developed markets, inflation increased moderately, while inflationist pressure on emerging markets, declined. The normalization of the monetary policy in the United States did not affect the world trade and markets, nor indeed was it more greatly affected by the recent protectionist rhetoric.

In the global vision based on our baseline, we have improved our growth prognosis for developed markets in 2018 by 0.1 percentage points (pp) up to 2%, to a large extent thanks to the strengthening of growth in the United States (as a result of the tax stimulus) and Eurozone prospects are also better, despite the recent soft patch experienced in Q1 2018. Nonetheless, the recovery will be less synchronized than last year, given that commercial tension would appear to head toward a certain level of divergence. 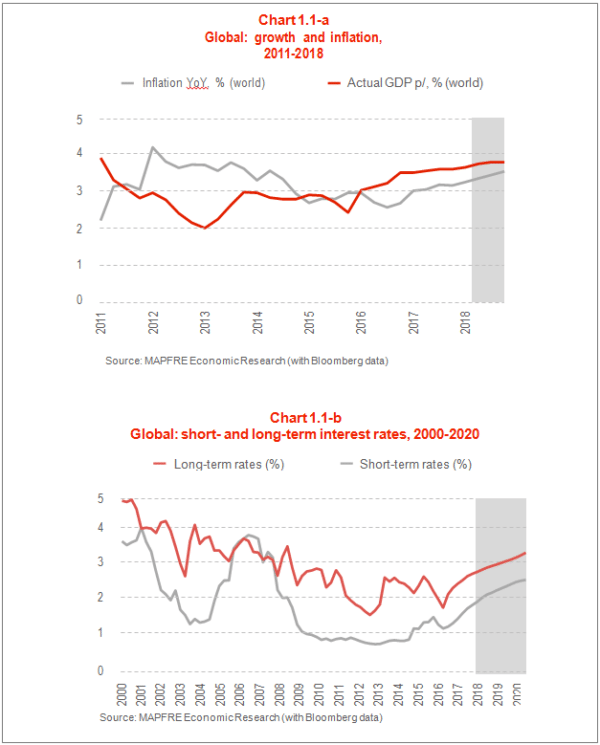 Inflationist pressure on the developed markets will continue to be moderate, thereby eliminating the possibility of a repeated tightening of the global monetary policy. Despite commercial tension, the combination of strong growth and well-controlled inflation on developed markets, will also provide a good basis for solid growth on the emerging markets, where our forecasts have been raised up to around 5%. In regional terms, a somewhat slower business in emerging Europe will be compensated by improvements in the rest of the emerging economies.

Since early 2018, major changes have been made to United States policies that have caused us to significantly improve our growth forecasts for this country, up to 2.8% in 2018. The December 2017 tax package reduced income tax charged against natural persons and businesses, including the possibility of a complete initial depreciation of capital. Stimuli are considerable, although it is hoped that they will eventually substantially expand upon the tax deficit. Nonetheless, the package must ensure a significant boost to growth, particularly in terms of investment.

Thus, we believe that this stimulus will add between 0.2 and 0.5 pp to 2018 growth with respect to that estimated toward the end of last year. Nonetheless, the increase in deficit may increase the return on bonds and, ultimately, be transferred to private investment.

In the case of the Eurozone, we hope that growth will establish at around 2.2% in 2018, as the delayed effects of the stimuli of the European Central Bank (ECB) are consolidated, confidence is recovered and the deleveraging cycle draws to a close.

Japan’s economy is expected to grow by 1.5% this year, before slowing down in 2019, as the tax consolidation takes hold in this country. It is hoped that the monetary policy will remain without major changes, with the yield curve control (YCC) policy objectives of the Bank of Japan, without changes for this year and the next.

As mentioned previously, the emerging markets will benefit from greater growth in developed economies and the recovery of prices of commodities, but the uncertainty relating to commercial protectionism may weigh down export-orientated economies. In this context, it is hoped that growth is recovered in all emerging regions. In Latin America, growth in Brazil will continue the route of recovery from the recovery of 2015-16, while uncertainty over NAFTA renegotiation will continue to weigh heavy  on Mexico. In Asia, we hope that those responsible for formulating policies in China will achieve growth of 6.3%, as Indonesia and the Philippines maintain the strong domestic demand that guarantees current progress (between 5.5% and 6%), even if certain imbalances are accrued. For its part, prospects are positive in emerging Europe, with the exception of Turkey, where growth will slow after the strong credit boost of 2017 and due to the fact that this year will probably see elections held early, amid the backlash of the correction of the previous year’s credit excesses.

As regards the normalization of monetary policy driven globally by the United States Federal Reserve, the boost to growth in tax stimuli in this country should increase underlying inflation to closer to the objective level, but not excessively so. Therefore, it is hoped that the Federal Reserve may increase interest rates twice more this year and even if there is an acceleration in the rate of rises, uncertainty remains regarding the recovery of the natural interest rate.

Additionally, there are risks of a reduction to the ECB and Bank of Japan inflation forecasts. The Phillips curve in the United States remains flat yet the underlying inflation might recover if disturbances to oil prices that permanently alter inflation expectations remain.

At present, it is expected that portfolio flows will have an impact on emerging currencies, which are expected to depreciate further.

With regard to world trade, the matters relating to existing world and regional commercial agreements would appear to be the main source of risk. According to preliminary estimates, the tariffs announced between the United States and China affect a small portion of world trade and will have an insignificant impact on growth. Nonetheless, the balance is fragile. If those responsible for formulating policies should fall into a spiral of new tariffs and retaliation measures, world confidence and growth may be significantly more affected.

In more general terms, the discontent over social and economic results worldwide has given rise to a public that is receptive to political platforms based on populist policies. It is difficult to predict the result if radically different policies should be applied, but the associated uncertainty may be negative to global economic growth.

The complete analysis can be found in the 2018 Economic and Industry Outlook: Second Quarter Perspectives report, prepared by MAPFRE Economics, available at the following link: