The Latin American Insurance Market in 2018

Latin America continues along the path of economic slowdown which began in the last few months of 2018, a year that ended with 1.0% growth in real terms (1.2% in 2017). However, this economic situation is not affecting all of the region’s economies and insurance markets in the same way.

In 2018, Andean and Central American countries (with the exception of Nicaragua) maintained solid economic growth. Currently, the majority of countries in the Andean region are undergoing internal socio-political problems which have an impact on their growth, as is the case in Chile, Bolivia, Ecuador, Peru and lately Colombia. These problems are expected to extend to their respective insurance markets. Colombia’s economy had shown the greatest stability and continues to maintain strong economic growth. The region’s two biggest economies, Brazil and Mexico, both experienced a slight slowdown in 2018, which has become more pronounced in 2019, although forecasts for next year are more promising. Argentina fell into recession and required financial assistance from the International Monetary Fund (IMF), while in Venezuela the situation of deep recession has intensified.

The insurance market in Latin America and the Caribbean amounted to 150.59 billion dollars in premiums last year, down -5.5% compared to a growth of 8.6% in 2017. The economic slowdown in certain countries, the performance of exchange rates and the impact of various monetary policies have contributed to an unbalanced and less dynamic growth scenario, which has primarily affected the Life insurance segment (see Chart 1-a). 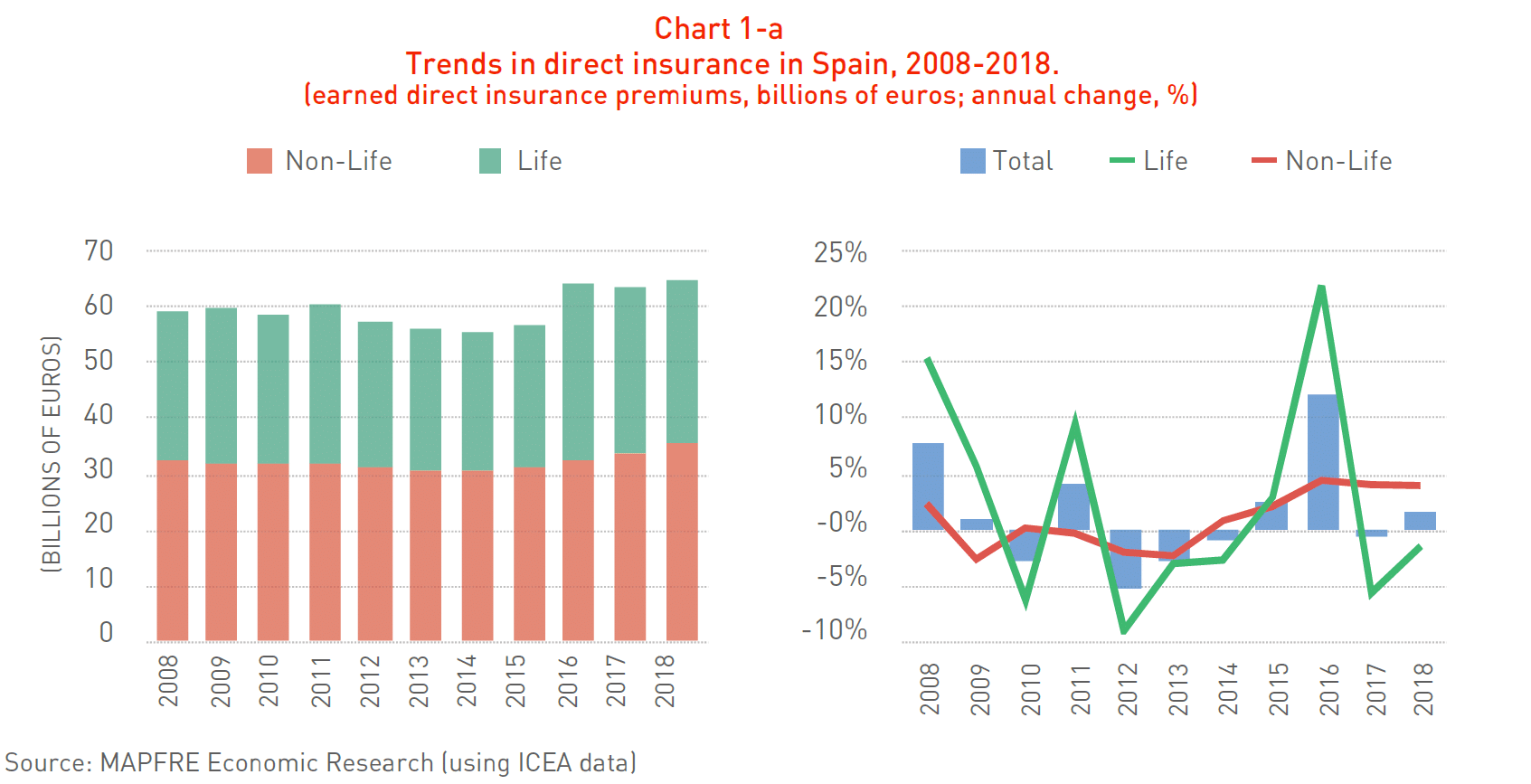 If we isolate the effect of the depreciation of some Latin American currencies (particularly the Argentine peso and the Brazilian real), we can see that most of the region’s insurance markets registered real growth (after inflation was corrected) in their respective currencies (see Chart 1-b). Brazil was affected by the easing of monetary policy to boost economic growth, with an interest rate reduction which hindered the development of the Life insurance segment. Currently the yield curve is maintaining a positive slope and interest rates seem to be stabilizing, which is helping to improve Brazil’s Life insurance segment. 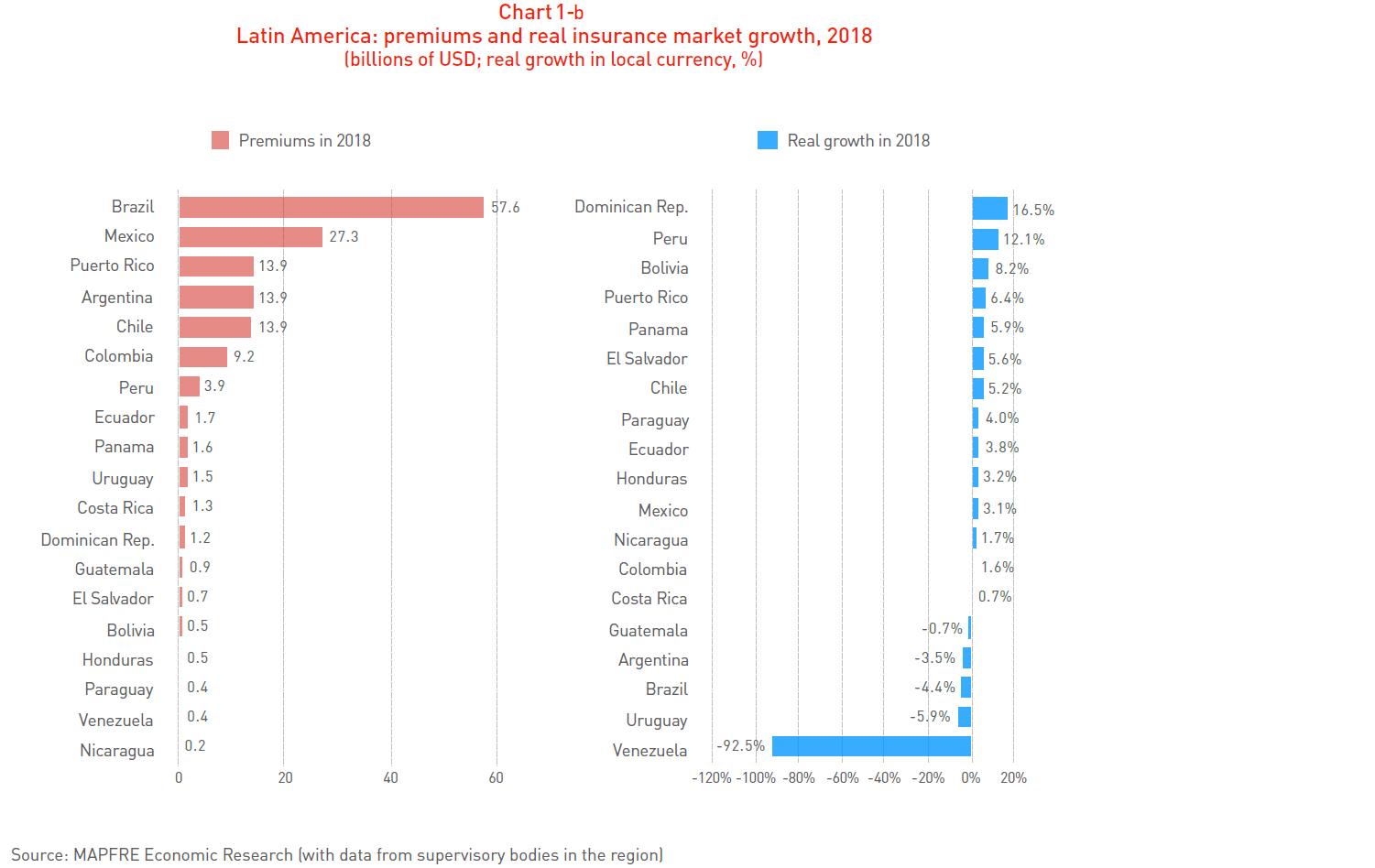 A positive note in the region is the aggregate net result for the insurance industry, which experienced a growth of 35.8% compared to the previous year, amounting to 12.06 billion dollars. The majority of markets experienced growth in profits compared to the previous year, when measured in dollars, with the exception of Bolivia, Chile, Colombia, Ecuador, Mexico, Puerto Rico, and Uruguay.

Regarding structural trend indicators, the penetration index (premiums/GDP) stood at 2.9% in 2018 which was unchanged from the previous year. The indicator also remains unchanged in both the Life (1.3%) and Non-Life (1.6%) segments. In spite of this stagnation, a medium-term analysis (2008-2018) shows that the Insurance Protection Gap (IPG), which reflects the difference between optimal insurance coverage and actual insurance coverage has narrowed when measured in relative terms as a multiple of the actual insurance market (see Chart 1-c). 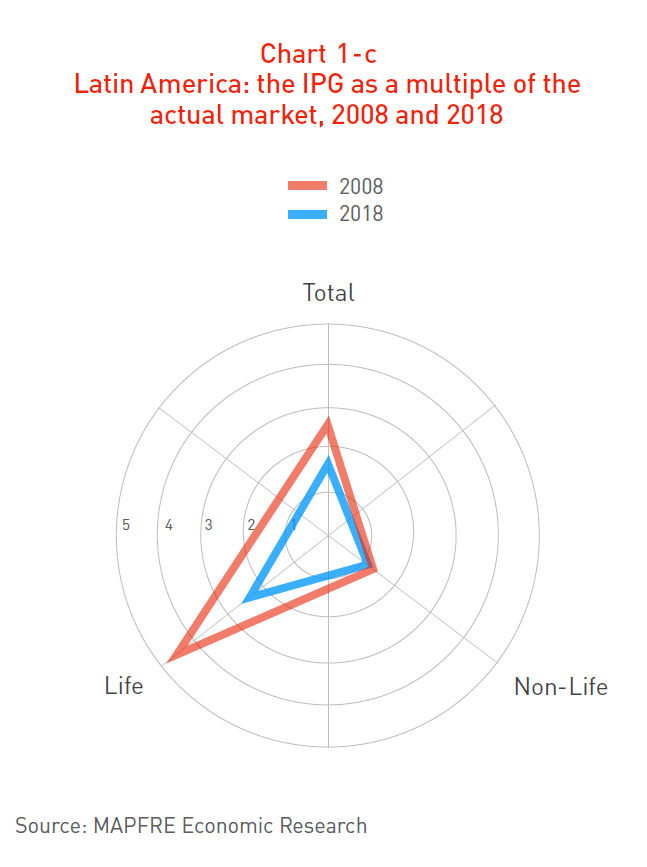 The comparison of the different countries in the region, in terms of penetration, density and depth — indicators which measure the level of development of their respective insurance markets — is shown in Chart 1-d.

The full analysis of the structural trends and behaviors of the region’s insurance industry can be found in the report The Latin American Insurance Market in 2018, prepared by MAPFRE Economics, available via the following link: