Pandemics and the effectiveness of healthcare systems

Assessing the effectiveness of a healthcare system based on what happens during a pandemic is not entirely accurate. For the rate at which the illness spreads would saturate any healthcare system unless other steps are taken to limit the spread. As an analogy, it’s like trying to assess the effectiveness of a dam in a port by imagining what might happen if there were a catastrophic event like a tsunami, when the dam had not been designed for that.

The Indicator of Effectiveness of Health Systems (IEHS), developed by MAPFRE Economics, aims to assess the effectiveness of healthcare systems under normal conditions, rather than a pandemic situation, for a total of 180 countries. This indicator has been constructed using data on life expectancy at birth, infant mortality and mortality due to non-communicable illnesses among people between the ages of 30 and 70 years.

The top three locations on the list (organized according to the IEHS) are the healthcare systems in Japan, Switzerland and South Korea (see Table 1). However, these countries are performing differently in response to the COVID-19 pandemic. According to data from May 4, 2020 (provided by the CSSE at Johns Hopkins University), the lowest death rate per 100,000 inhabitants was in Japan with 0.42, followed by South Korea with 0.49. However, South Korea, presented a lower deaths to diagnosed cases ratio (2.4 percent in South Korea compared to 3.6 percent in Japan). It is still too early to draw any definitive conclusions, as new data is received by the day and there is a lack of homogeneity in the information as a result of the differences in the system for counting both deaths and the number of tests being carried out, which forms the basis for estimating the number of diagnosed cases. However, in the case of Switzerland, which has a higher IEHS ranking than South Korea, the indicators are significantly worse in relation to the pandemic, with 20.95 deaths per 100,000 inhabitants and a 6 percent death rate among diagnosed cases.

Another remarkable case is the experience in Germany, where there were 8.43 deaths per 100,000 inhabitants, despite this country having one of the oldest populations in the world. This data is in contrast with the considerably higher figures of the United Kingdom (43.33 deaths per 100,000 inhabitants) and France (37.63). Germany was swift to react and proved that it was capable of testing its population (in its own hospitals), making use of the country’s wide network of laboratories. This meant the country could detect and isolate more diagnosed cases in order to prevent infection as well as alert people who may have been infected so that they could be tested. The experience of northern Italy had served as an early warning sign, which Germany understood.

The cases of Greece and Portugal were also noteworthy, with 1.36 and 10.34 deaths per 100,000 inhabitants, respectively, in contrast to the data from Italy (48.12) and Spain (54.42). However, the healthcare systems of the two latter countries have a significantly higher effectiveness rating according to the IEHS (among the ten best in the world). In these cases, Greece and Portugal’s ability to react, understand the extent of the problem and take appropriate lockdown and social distancing measures should be noted. This had a significant impact on controlling the pandemic. 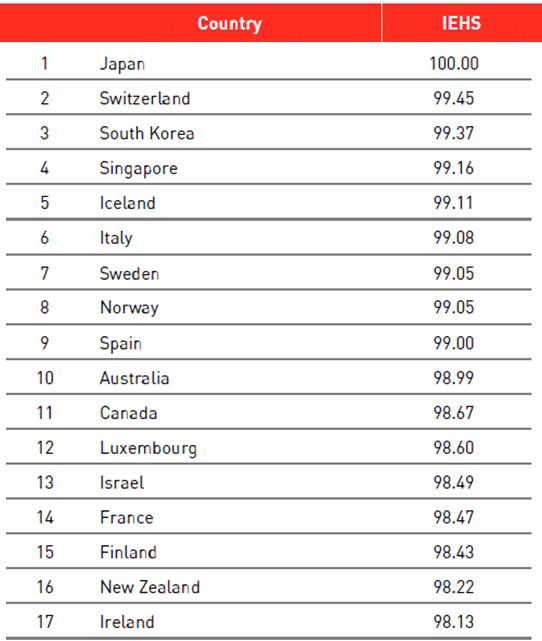 There are therefore several factors, in addition to the degree of effectiveness of the healthcare systems, that influence the development of the pandemic. These include the population’s demographic profile, the speed at which distancing and lockdown measures were taken, in addition to research, capacity of medical equipment production and supply, the presence of urban hubs with large population centers, whether or not the country is a focal point with international airports, among other factors, which are affecting the different levels of severity of the situation in the different countries.

Whatever the case, the situation will potentially give rise to a review of the weaknesses that may have surfaced within healthcare systems. Capacity indicators (hospital beds, ICU beds, number of physicians, nurses, other medical personnel, among others) are particularly relevant in this regard.

In the European Union, part of the fiscal measures to support the economy being discussed in order to overcome the great economic impact that the pandemic is causing, are aimed at the healthcare systems of its member states. In the United States, on the other hand, it is expected that there will be an unprecedented increase in Medicaid program registrations and the use of electronic markets called exchanges by people who have been left without the healthcare coverage provided by their company.

The following link leads to the study “Health systems: a global analysis” prepared by MAPFRE Economics, which provides a detailed examination of healthcare systems in the United States, Mexico, Brazil, Chile, Australia, Japan, Singapore, Spain, France, the Netherlands and the United Kingdom. It also contains the complete ranking of healthcare systems in 180 countries according to the IEHS.