The economic crisis caused by the COVID-19 pandemic led to a decline in global GDP of -3.3% in 2020. This is the largest recorded loss in GDP since the Second World War, resulting in an output gap estimated to be more than 3% of global potential GDP. In this context, the only major economy in the world to have succeeded in recording positive growth in 2020 was China, which it achieved thanks to an economy centered on technological competence, domestic sustainable development, integration into regional value chains (with Europe) and the promotion of its sovereign governance model.

Despite its severity, the global economic contraction has been much lower than initially projected, thanks to the deployment of fiscal and monetary stimuli and the greater tolerance to the pandemic seen in the second half of last year. The first figures from national accounts and short-term indicators reveal the highly asymmetrical and asynchronous recovery taking place around the world. Markets such as China and the US are leading the way out of the current economic cycle and toward recovery, while others such as Latin America are showing signs of an economic sluggishness that is in danger of becoming structural. Moreover, this recovery is taking place against a backdrop of increased risk appetite, with a financial market buoyed by tremendous levels of liquidity. It is also set in a context of considerable differences in monetary policy between developed and emerging markets, engendered by the resurgence of global inflationary pressures.

The 2021 Economic and industry outlook: second quarter perspectives report, prepared by MAPFRE Economics, predicts global economic growth of between 6% (baseline scenario) and 3.7% (stressed scenario) in 2021, compared to a fall of -3.3% in 2020 (see Table 1). 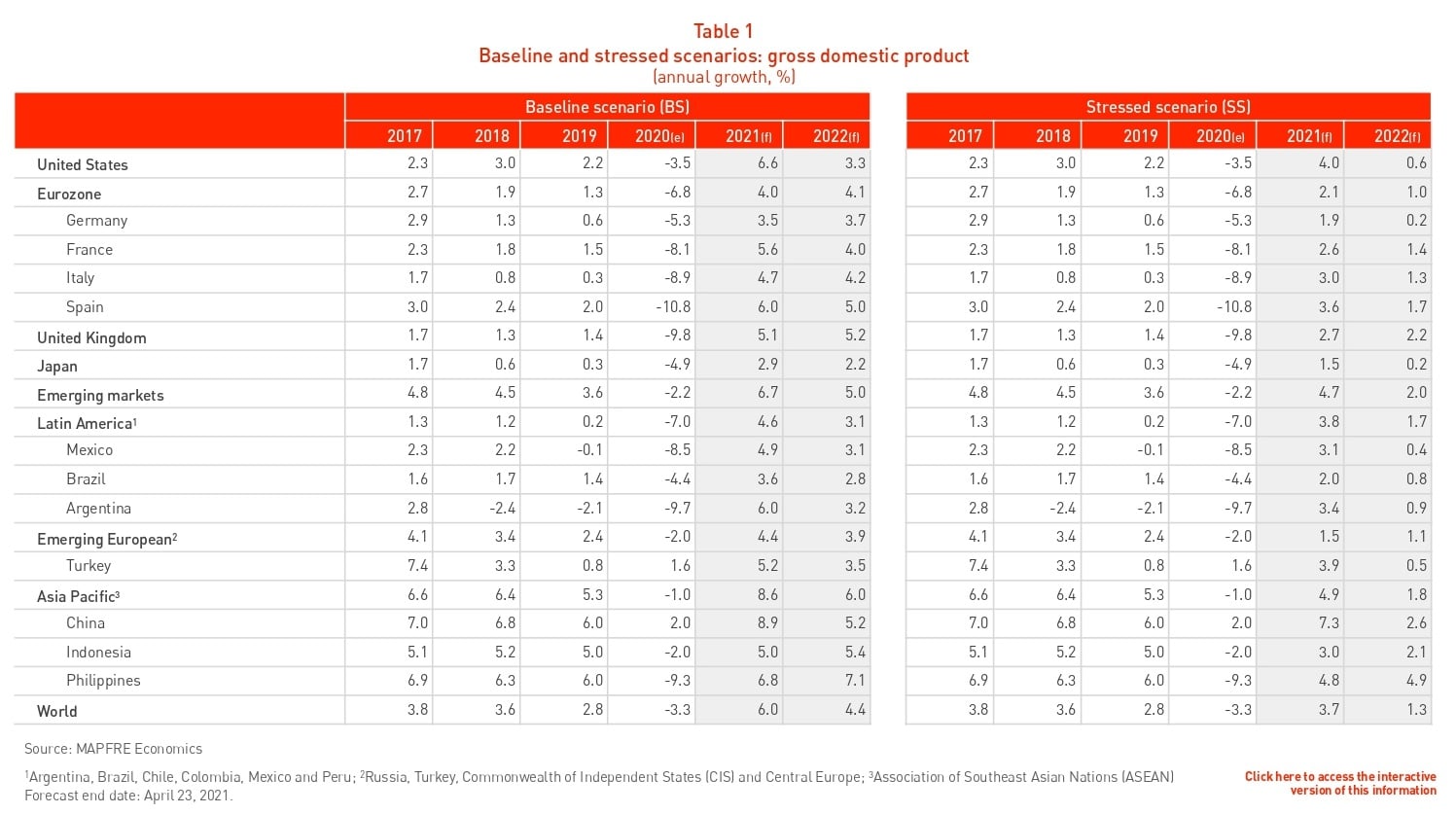 In the baseline scenario, herd immunity is expected to be achieved in developed countries during the transition between the second and third quarters 2021, while emerging countries are expected to achieve this a year later, on average. A moderate and temporary upswing in inflation can also be seen, with ongoing monetary and fiscal support policies guaranteeing liquidity, stability in asset valuation and improved consumer expectations. The overall financial situation is stable, with asset values remaining free of volatility, low real interest rates and moderately high profit levels.

The report also presents its forecasts based on a more pessimistic outlook (the stressed scenario), as defined by two key markers: a rise in inflation that is considered rather more structural in nature, and the possibility of problems arising with respect to the effectiveness of the vaccines. This would lead to a scenario characterized predominantly by a loss of consumer and producer confidence. In this scenario, monetary policy would be affected by the pressure exerted on the Federal Reserve as a result of market expectations, public and private income would fall due to rising real interest rates, and corporate credit risk premiums would suffer significant stress. All of this would trigger margin calls and liquidity problems, despite the efforts of central banks (i.e. LTROs). The financial situation and loss in confidence envisioned in this alternative scenario would trigger a risk-off mood that would sharply curb portfolio investment flows to emerging countries, causing balance-of-payment problems with twin deficits (whether inherited from the pandemic or not) and strong exchange-rate depreciation, thus leading to a rise in unemployment and a decline in wages.

The full analysis can be found in the 2021 Economic and industry outlook: second quarter perspectives report, prepared by MAPFRE Economics and available at the following link: