Industry outlook: analysis of the impact of the worst economic crises on the insurance industry

The consequences on the economy and the insurance industry of the social distancing and lockdown measures adopted due to the COVID-19 pandemic could surpass the impact of the most profound crises of recent times. Despite the easing of lockdown measures already being taken in many countries, recovery is not expected until 2021. There is great uncertainty as to the estimates and structural effects that may arise from the present global crisis. In particular, emerging economies have suffered strong outflows of investment and sharp exchange-rate drops, which, coupled with the falls in GDP, will have a marked impact on the turnover and profitability of their respective insurance markets.

The report’s analysis of the worst economic crises over the last 40 years shows that sharp declines in GDP lead to significant setbacks in insurance premiums at the aggregate level, in both emerging and developed markets.

When looking at what has happened in the US insurance market in the most severe crises over the last four decades, it is noted that the crisis that is closest to the current situation is that of 2007-2009, with GDP falling by -2.5%. This led to a decline in insurance industry premiums of -7% in 2009, with no clear signs of recovery since then, unlike the crises of the 1980s and 1990s, which were accompanied by a solid recovery with real growth exceeding GDP growth once the economy regained its growth path (see Chart 1). 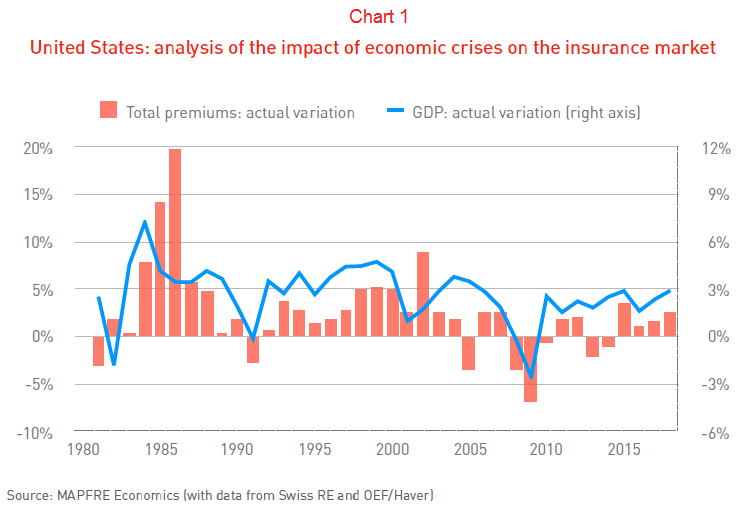 Within developed markets, Japan is particularly interesting. MAPFRE Economics’ analysis of the worst economic crises of recent decades shows that the bursting of Japan’s housing bubble in the early 1990s marked a turning point both in economic growth and in the development of the country’s insurance industry; a structural situation that has not yet fully recovered to date. Thus, in the 1990s (the “lost decade”), solid and sustained growth in the Japanese insurance market does not recover. Since then, its economy and insurance industry have alternated between periods of weak growth with setbacks, some significant, as can be seen in Chart 2. 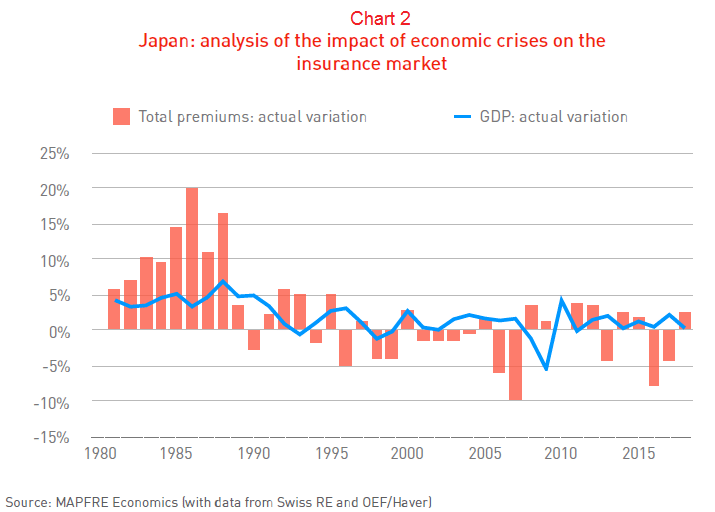 If the most recent economic crises in Spain since 1980 are taken as a reference, the time that most closely compares to the current situation in the sector in terms of severity of the expected impact are the two crises of the 2007-2012 period. They were virtually consecutive, which led to sharp drops in GDP and a decline in insurance industry premiums also in single years (see Chart 3). 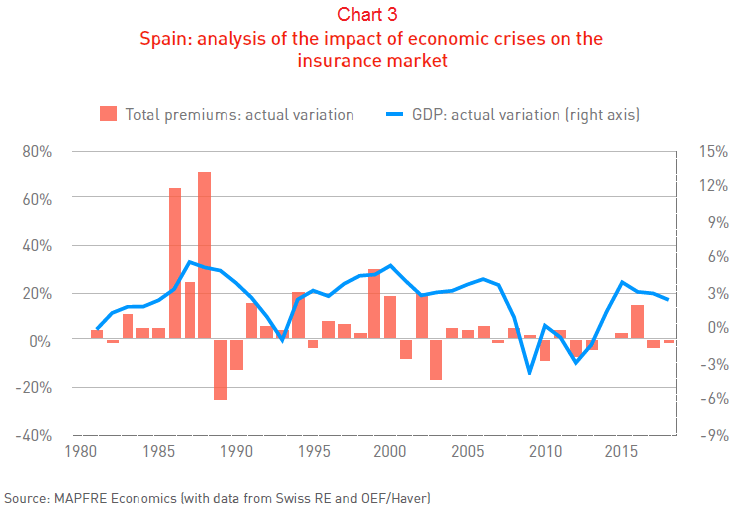 In that period, GDP fell from -3.8% and -3% in 2009 and 2012, respectively, which led to a decline in insurance industry premiums of -8.8% and -7.4% in 2010 and 2012, particularly affecting the Life business but also automobiles, industrial multirisk, third-party liability, transport (hull and merchandise) and credit insurance. However, health, homeowners and condominium insurance lines were resistant at the worst moments of those crises and only slowed down.

Once these moments passed, the aftermath of the European Central Bank’s (ECB) stimulus measures at the time, with interest rate declines to negative levels (which remain in place today and are going to continue for a long time), led to the growth of insurance premiums in subsequent years anchored at low, even negative, levels that were below GDP growth. This was essentially because of the effect of the low interest rate environment on the traditional life annuity and Life savings insurance business. However, it should be noted that the Non-Life business lines again experienced significant growth after the crisis, and health insurance premiums even showed a countercyclical behavior. One of the drivers of growth of the sector in this period was the Non-Life business. However, it should be noted that the slowdown and subsequent recession of the late 1980s and early 1990s are not representative of the distortion in the growth of insurance premiums, which involved the process of externalizing companies’ pension commitments to their workers that took place at that time.

With regard to the effects of the current crisis on the balance sheets and solvency of insurance companies, it is worth mentioning the fact that the Spanish insurance industry has traditionally had a markedly conservative nature in its investments, in which Spanish and other eurozone sovereign bonds are the main investment, which, having been backed by the ECB’s broad asset acquisition programs, have a more limited risk. This feature, which was starting to be questioned due to reasons of profitability (as is often the case in periods of low interest rates and good stock market behavior), has proved to be an appropriate policy that is allowing the sector to deal with the current complex situation with solvency.

From the analysis of what has happened in the Mexican insurance market in the economic crises experienced since 1980, it is observed that, during the 1995 crisis, GDP fell by -6.5%. This led to a drop in insurance premiums of -13% during that year and -5% during the following year, despite the economic recovery (see Chart 4). However, during the next four years, the insurance industry experienced strong growth, well above GDP growth, with real average growth (once the effect of inflation had been corrected) of 16% per year. During the Great Recession of 2007-2012, the Mexican insurance industry showed great resilience, slowing down but without experiencing setbacks despite the -5% GDP decline in 2009. In this year the insurance industry experienced real growth of 7%, anticipating the subsequent economic recovery. It should be noted that the low level of insurance penetration in the Mexican economy, which results in economic conditions that produce higher growth in the insurance business, also helped in these recoveries, as is often the case in other emerging markets. 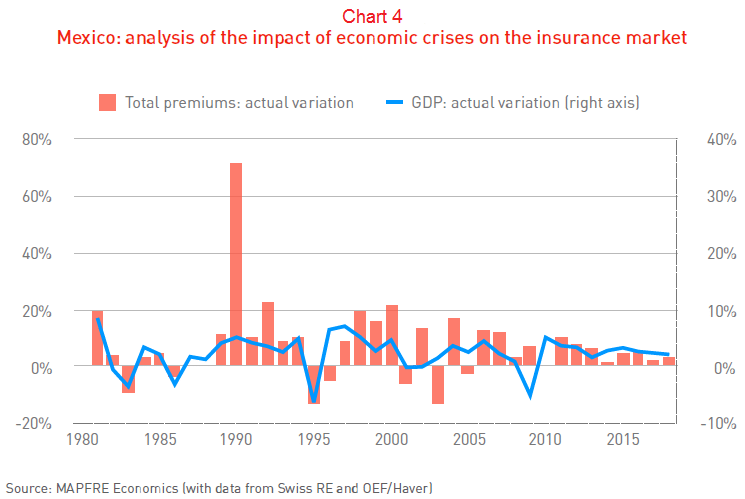 In Brazil, the previous situation that best compares to the current period would be that of 2015 and 2016, when GDP fell by -6.8% overall (see Chart 5). During that period, the insurance industry experienced a sharp slowdown, but without experiencing setbacks (from 8% growth in 2014 to 2% in 2015 and 2016, in real terms). However, it must be clarified that, at the time, the Brazilian central bank adopted a contractionary monetary policy with strong interest rate rises in order to control inflation. This measure favored the development of Life savings insurance, a major business in the Brazilian insurance market. On this occasion, however, the monetary policy applied is being accommodative (with lower interest rates), and therefore this favorable effect on the Life business cannot be relied upon. In this context, the insurance industry could experience a reduction in total turnover, in real terms, unlike what happened during the previous crisis.

In addition to the expected fall in turnover is the negative effect on the shareholders’ equity of insurance companies resulting from increased volatility and risk premiums in financial markets. However, in the face of this complex outlook, it is also important to note that the return to recovery planned for 2021 would lead to an intense recovery of the insurance business, as can be seen in the analysis of the series shown in Chart 5. Here, moderate GDP growth is seen to lead to larger growth in the insurance business, characteristic of emerging markets, where the low level of insurance penetration in the economy makes its elasticity in the event of GDP growth higher than in developed markets, where the level of competition and saturation of insurance markets is higher. 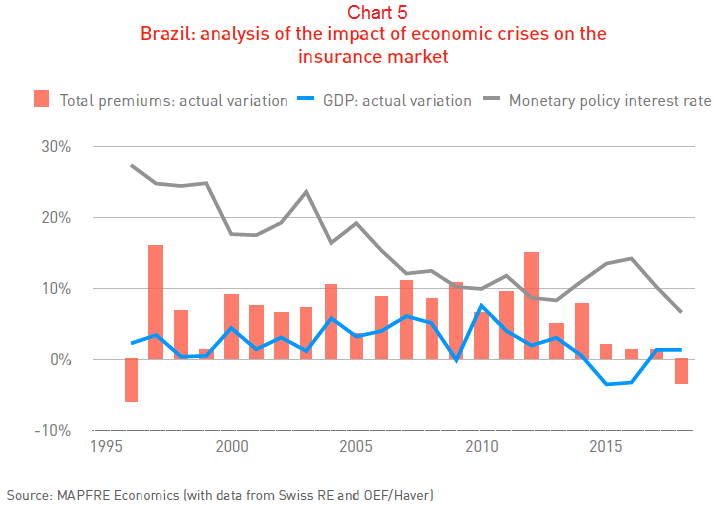 Other emerging and developed markets

The following link contains the “2020 Economic and Industry Outlook: Second Quarter Perspectives” report prepared by MAPFRE Economics, which provides a similar analysis for the insurance markets of Argentina, Turkey, the Philippines, China, Germany, Italy and the United Kingdom.