The latest global and regional measures, along with uncertainties regarding how the COVID-19 pandemic will continue to evolve, are seeing growth forecasts dialed back, with increasing concerns worldwide about consumer price levels, especially in emerging economies.

In this context, we are also seeing, among other effects, signs of deceleration in China’s economy, as a result of adjustments in the real estate market (at the local level) caused by the Evergrande situation, and this is especially having effects on raw materials and emerging markets. We are also seeing an acceleration of inflation caused by a rise in global demand and energy restrictions, combined with supply disruptions derived from the negative effects of the COVID-19 pandemic on global value chains. This seems to be especially true in industries producing components and in global logistics, and all of this is affecting the capacity to meet the existing demand for manufactured goods.

In the baseline scenario considered in the report, the global economy will grow by 5.9% in 2021 and by 4.9% during 2022 (0.1 and 0.5 percentage points lower than predicted three months ago). Developed markets will make the most substantial contribution to global economic growth, while emerging markets will have to overcome significant challenges from the uneven effects of the pandemic and the international context (such as differing effects of inflation, deceleration in the Chinese economy and its effects on raw material imports and their financing terms, and the incomplete process of recapturing portfolio investment flows, which began with the pandemic and could affect exchange rates, etc.).

In this environment, global recovery is facing supply bottlenecks and limitations derived from the energy crisis, problems with logistics at ports, inability to perform timely restocking in the wake of a return to relatively normal global trade, etc. All of this will have effects on global manufacturing output, as well as on commerce, restricting the ability to achieve full recovery and pushing it back to 2023.

In conclusion, the baseline scenario considers very significant factors, such as inflation, which is expected to be persistent but not permanent (inflation will be transitory, and although its effects will fade more slowly than predicted a year ago, it seems that it will not alter the forward guidance on monetary policy being issued by central banks worldwide). The effects of inflation on disposable income will be offset by savings being freed up, thanks to the relaxation of the restrictions imposed to control the pandemic, and by more optimistic outlooks on the future evolution of COVID-19. Global monetary conditions will remain very relaxed during 2022, and the monetary normalization pursued by central banks in developed countries will temper the pace of asset acquisition, without changing expectations on interest rates. All of this is contributing to an abundance of liquidity. In developing countries, on the other hand, monetary policy will be more variable, conditioned in many cases upon the political economy rather than economic policy.

In contrast, in the stressed scenario we would see a market taken by surprise by a more aggressive monetary reaction, caused by inflation that proves to be more persistent, giving rise to a certain nominal volatility and less favorable financing terms, and with the potential for domestic demand being affected by rising prices. This scenario could lead to a decrease in global GDP growth figures by approximately one half of a percentage point. Despite all of this, the scenario is not one with risk of a recession.

In conclusion, and after an overall risk assessment, we find, among other factors, a global geopolitical framework that will remain stable with upward and downward rebalancing. In terms of economic policy, the main central banks see inflationary perspectives based on the idea of a limited and transitory increase, but that could be reduced as global supply chains face certain obstacles. Among these are shortages of certain goods involved in initial production phases, such as raw materials and energy, and the accumulation of bottlenecks. At a macroeconomic level, the Chinese economy is starting to show the first signs of fragility, due in part to a more complex environment both nationally and internationally. With regard to global debt, the figures for the second quarter of 2021 show a slight decrease in the debt to GDP ratio, standing at 353.4%. The growth was led by emerging economies, with an increase of $3.5 trillion, compared to $1.3 trillion in developed economies. Progress with COVID-19 vaccination has also enabled the partial relaxation of restrictions worldwide. This is especially the case in developed countries, while occurring to a lesser degree in countries with emerging economies. 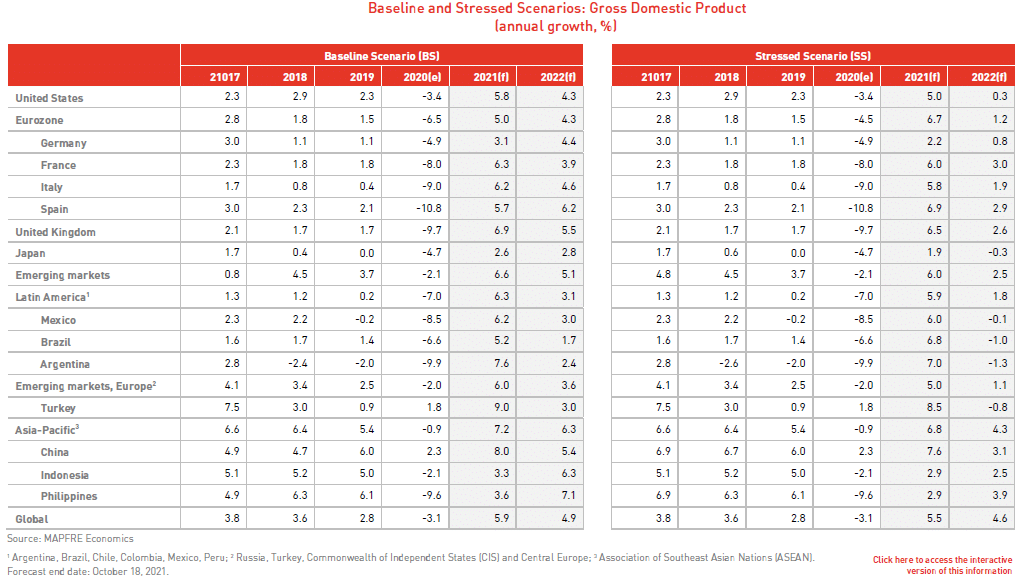 The full analysis can be found in the report entitled 2021 Economic and industry outlook: fourth quarter perspectives prepared by MAPFRE Economics and available at the following link: