The Spanish Insurance Market in 2017

During the course of 2017, global economic growth gained pace across the board in both emerging and developed markets, pushing back the change in the economic cycle that had previously been anticipated. The level of activity was partly encouraged by the continuance of the loose monetary policy in the developed economies and partly by the boost in the Chinese economy. World economic growth averaged around 3.6%, compared with 3.2% in the previous year, with a combined growth rate for the developed economies of 2%, while the emerging economies enjoyed a growth rate close to 5%.

Spain continued to enjoy the highest growth among the large economies of the eurozone, with economic growth of 3.1% in 2017. The strong performance of the Spanish economy was reflected in the behavior of the Non-Life lines which grew some 4.0% to 34 billion euros. This was the fourth consecutive year in which a growth in premiums was registered in this segment, which has benefited from the recovery of overall economic activity in Spain and, in particular, from the greater capacity for consumption of both companies and households (see Chart 1). 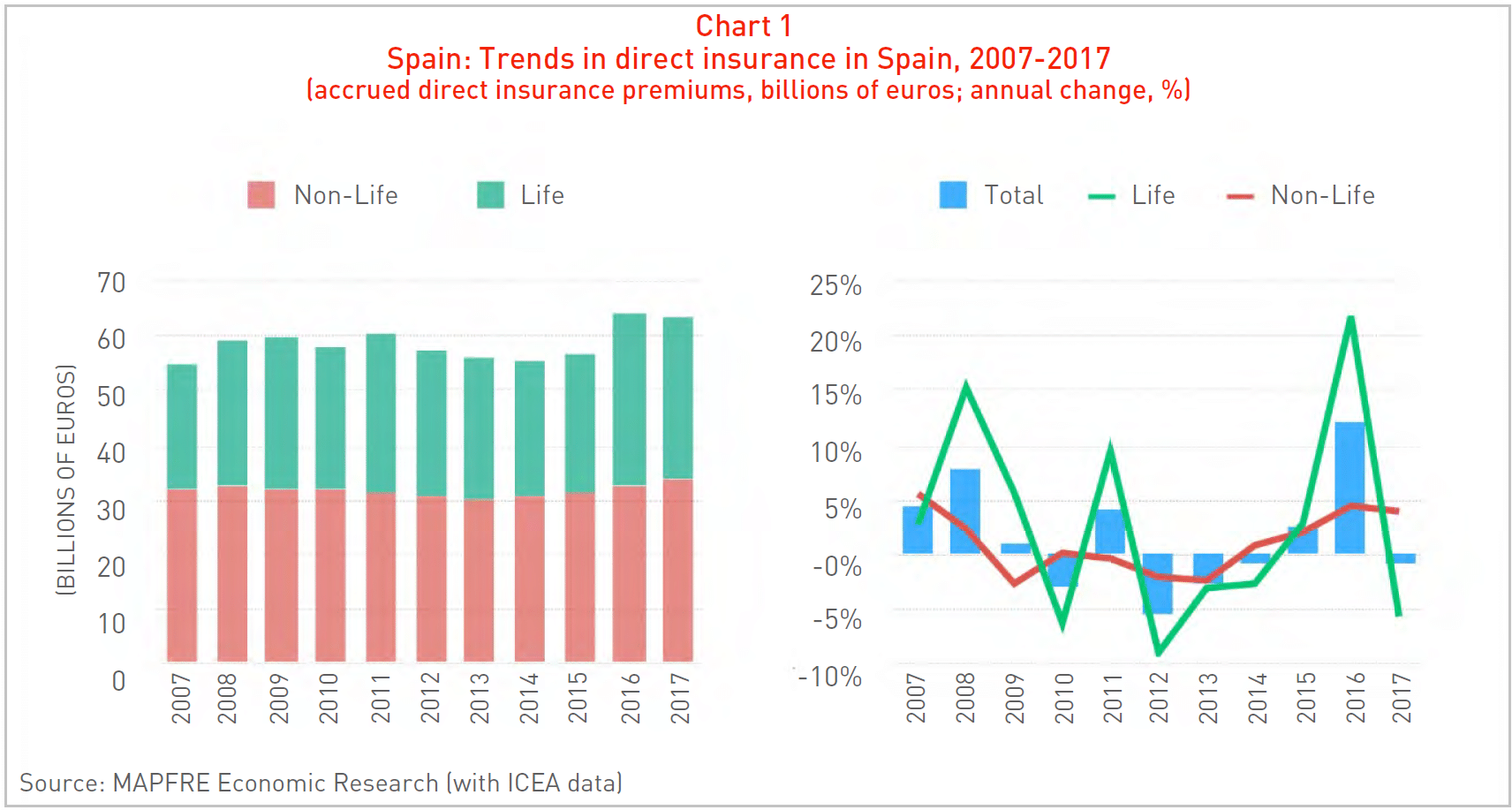 However, the Spanish insurance market as a whole showed a 0.7% reduction in premium volumes, amounting to 63.41 billion euros. This was due to the fall of -5.6% registered in the Life insurance segment (which stood at around 29.41 billion euros in premiums). This behavior was, among other factors, strongly influenced by the persistence of a low interest rate environment.

The fall in Life insurance premiums was caused by a fall in Life Savings given that the premium volume for Life Risk insurance remained unchanged. Nevertheless, in terms of managed savings, positive growth and a rising trend were maintained, with technical provisions for Life insurance increasing by 3.3%.

An analysis of the main Non-Life lines shows that automobile insurance continues to be the line which is building up the greatest premium volumes, accounting for 32.1%. Premium volume increased for the third consecutive year, totaling 10.92 billion euros, representing 3.4% growth over the previous year, thanks to the increase in the number of vehicles insured, a slight rise in the average premium and an increase in new vehicle sales (see Table 1). 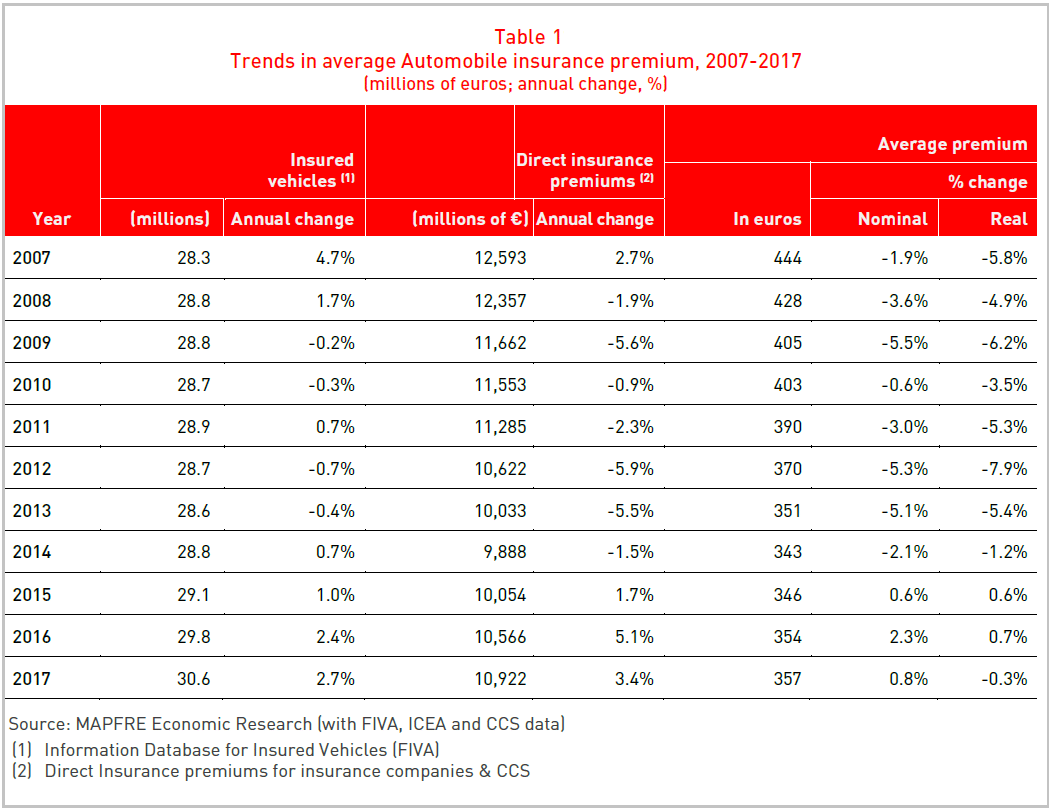 The biggest increase was in Health insurance, at 4.2%, reaching a premium volume of 8.06 billion euros. The continuing growth in Health insurance has made this line attractive for new companies entering the market, relying on direct distribution through essentially digital channels. For yet another year, collective insurances have been the line’s main growth driver.

Multirisk insurance accounted for 20.2%, which made it the third largest Non-Life line, with premium volume of 6.88 billion euros in 2017, and growth of 2.2% compared with the previous year. Homeowner insurance has been the growth driver in this line’s premiums (3.0%), followed by Condominium (2.3%) and Commerce (1.8%). Industrial Multirisk, for its part, registered a decrease in premiums for the sixth consecutive year, falling to 1.17 billion euros, a similar figure to that of 2006.

As regards the technical performance of the Non-Life segment in 2017, the combined ratio stood at 94.0%, 0.4 pp above the value registered in 2016 (93.6%), due to an increase in the loss ratio, which rose from 71.3% in 2016 to 72.0% in 2017. Despite this deterioration, the combined ratio maintains values under 100%, which indicates that the technical performance of the Spanish insurance industry remains in sound health (see Chart 2). 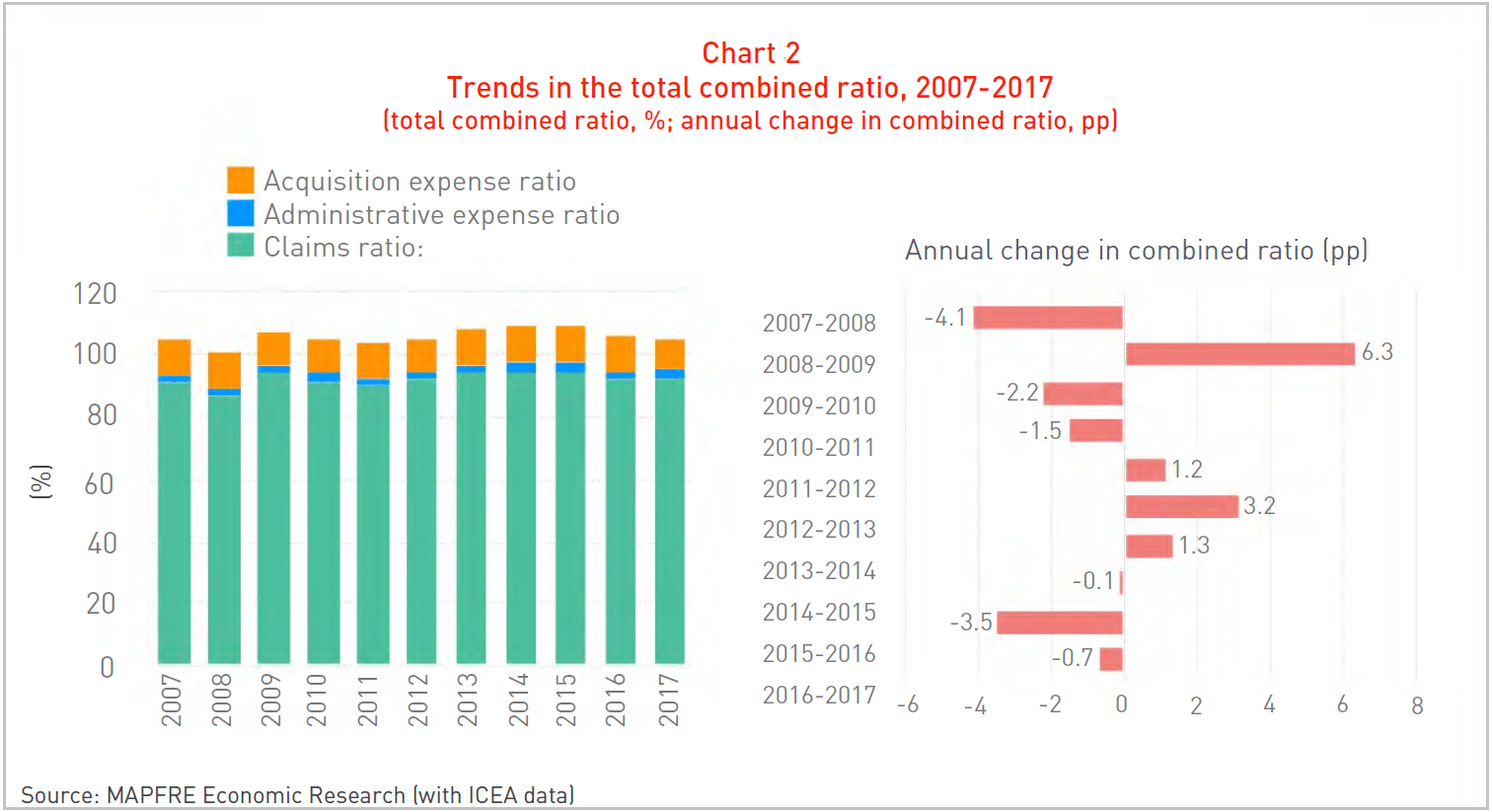 As to investments by Spanish insurance companies, these reached a total of 292.06 billion euros by the end of 2017, estimated at an increase of 1.4% over 2016. An analysis of the investment structure shows that the main category of assets chosen was fixed income, representing 52.9% of the investment portfolio, with sovereign fixed income as the dominant component. The return on financial investments stood at 3.8%, almost the same level as 2016 but, as in previous years, staying above the risk-free, interest-rate curve which is proof of the financial management skills of the insurance industry (see Chart 3). 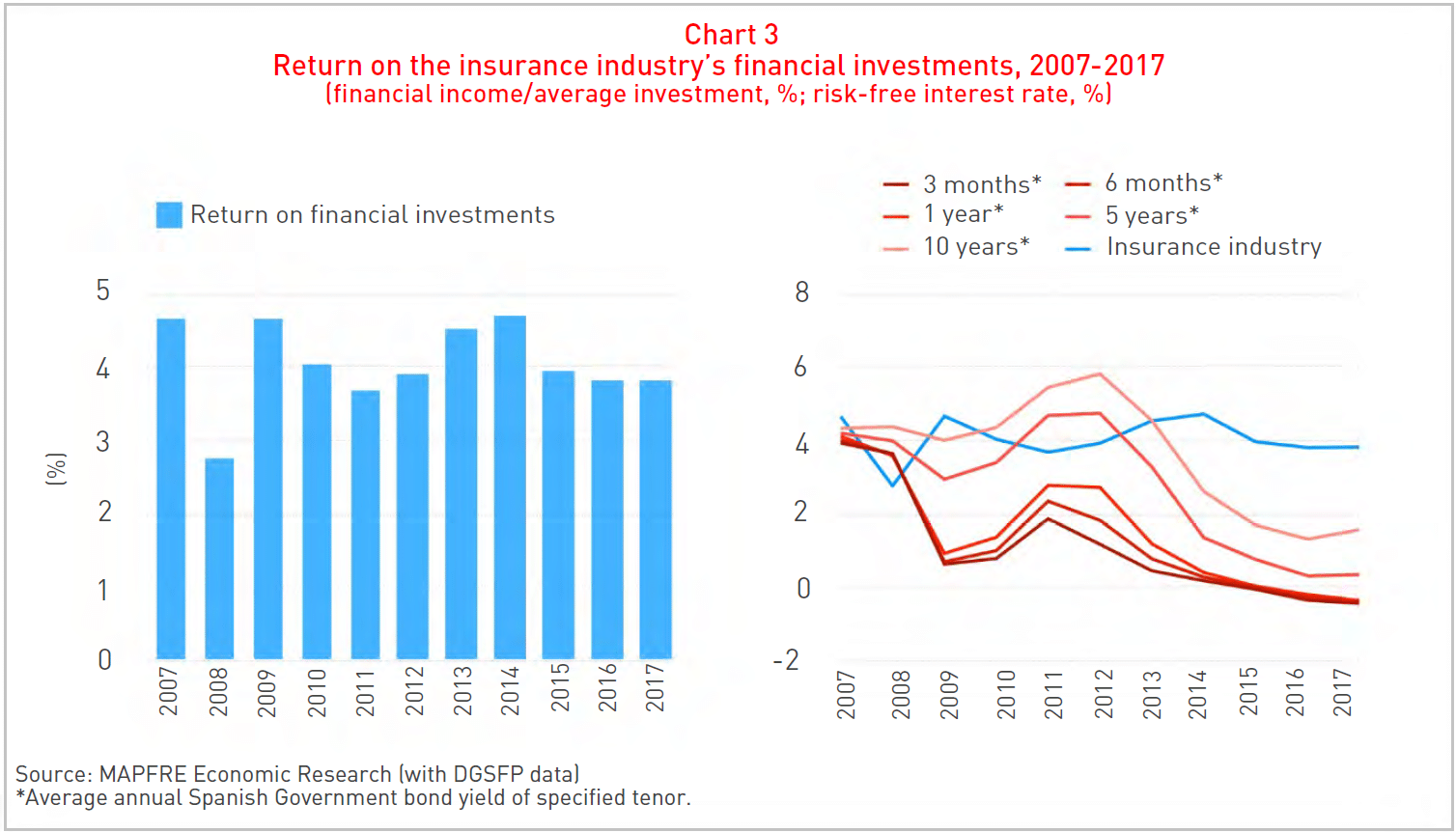 The credit ratings of most of the industry’s investments were to be found in the third rung of the ratings map used under Solvency II (equivalent to BBB), in line with the Spanish sovereign risk rating at the close of 2017. Nevertheless, it should be emphasized that in March 2018, both S&P and Fitch raised Spain’s credit rating to A-, and Moody’s followed the same trend in April by raising its rating to Baa1, with the result that the credit rating of the Spanish insurance industry’s investment portfolio also benefited from these changes.

With regard to solvency levels, May 2018 marked the deadline for the publication of the second Solvency and Financial Condition Report (SFCR) for individual insurance companies, in accordance with the new prudential regulation based on applicable risks in force in the European Union since January 1, 2016 (Solvency II). After analyzing a sample of companies representing 68.9% of the insurance premiums and 79.4% of the technical provisions on the Spanish market in 2017, it can be inferred that, in general terms, the industry’s solvency position continues to be sound.

In relation to the analysis of the structural growth trends for the industry, it can be inferred that the performance of the Spanish insurance market in 2017 seems to have slowed down and diverged from the trend toward strong growth initiated in 2014. This behavior is underlined by the fact that the indexes for penetration (5.45%), density (1,357.8 euros per capita) and depth (46.4%) registered slight falls in relation to the previous year, remaining below the average of those indexes for the 15 main economies in the European Union (see Chart 4). 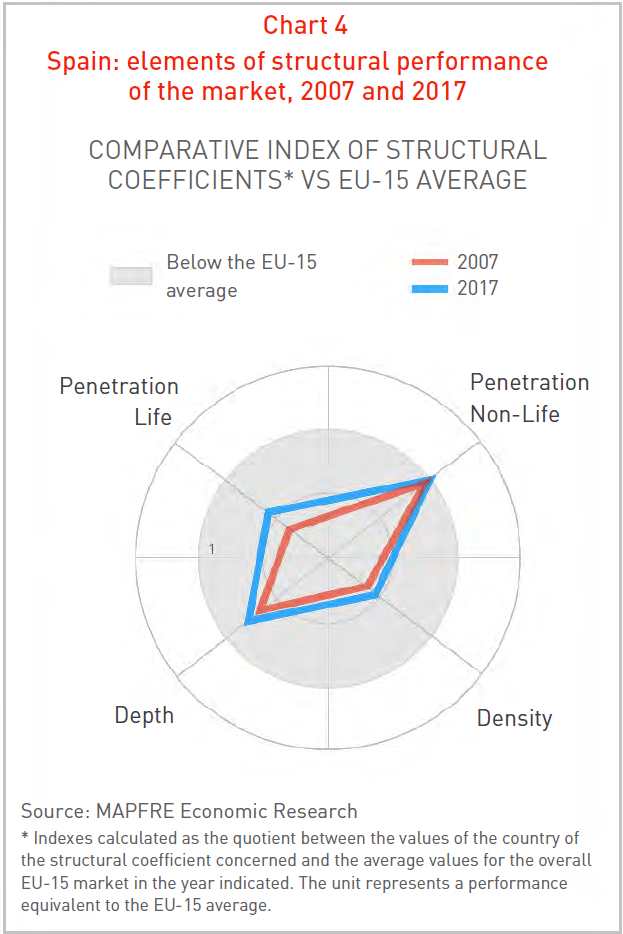 The behavior observed in 2017 can essentially be explained by the negative performance of Life Savings insurance business, which is starting to be severely affected by the continuing low interest rate environment into which the eurozone has plunged. This is a context in which the demographic trend in Spain clearly demonstrates the need for savings in order to make provision for retirement, given the progressively increasing pressure that will be brought to bear on public funds in order to maintain the current replacement rates for pensions.

Finally, it is important to emphasize that 2017 witnessed an increase in claims arising from catastrophic events causing worldwide economic damage. It will take considerable time to assess the final cost involved, given the severity of the damage and the impact of the cover for loss of business, which will doubtless make 2017 one of the costliest years ever in terms of natural disasters. This has had a major impact on the accounts and balance sheets of many reinsurers, and it is estimated that there will be increased pressure to recover acceptable levels of technical profitability, which could lead to a rise in the cost of reinsurance.

The complete analysis can be found in the report The Spanish Insurance Market in 2017, prepared by MAPFRE Economics, available at the following link: