The world economy continues to be mired in an unprecedented situation, with significant repercussions for the insurance industry. The global economy is experiencing a sharp contraction as a result of the pandemic, although forecasts for the sharp economic downturn estimated for 2020 as a whole have improved slightly. However, future recovery will be slower than forecast and subject to a great deal of uncertainty (due to new outbreaks of the disease, but also progress in terms of vaccines and treatments). It will vary by country and industry, with the insurance industry negatively affected, but to a lesser extent than other sectors that are more vulnerable to the risks caused by the pandemic.

Unlike other economic crises, the measures being taken by monetary authorities and governments around the world are also unprecedented. The rapid intervention of central banks in the major economies stabilized the financial markets (where the insurance industry is one of the major institutional investors) with quantitative easing measures implemented through extensive asset-acquisition programs. These banks are also pursuing accommodative monetary policies with lower interest rates to support the real economy, along with packages of fiscal expansion measures from governments, depending on each country’s capabilities. In that respect, significant differences have been seen from country to country due to the smaller initial room for maneuver in emerging countries and in some developed countries.

All of these measures will be of great help to the insurance industry, which depends largely on the economic cycle’s performance and the correct functioning of the financial markets. However, the long-lasting low interest rate environment will have a negative impact on its balance sheets, profitability and the development of the Life Savings business. Chart 1 shows the eurozone’s slump in risk-free interest rates throughout the entire curve, while Chart 2, which is especially striking, shows the plunge in interest rates in the United States. However, Life investment insurance products are more common in the US, and these are linked more closely to the performance of the stock markets, which have performed better in that sector during the current crisis. 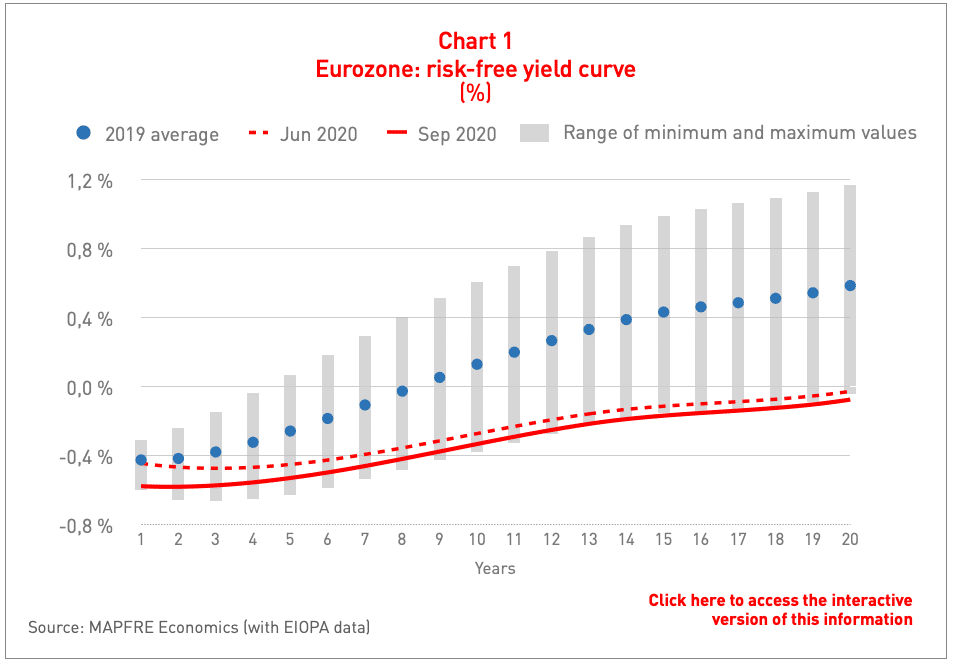 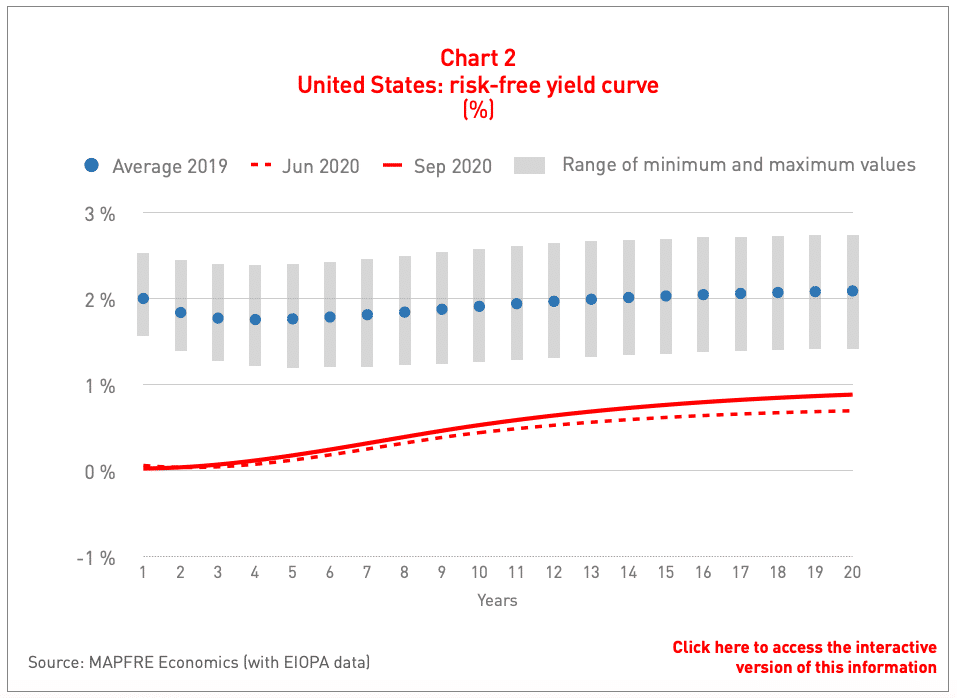 Emerging economies are also facing a decline in their insurance business, as has been the case in the most severe crises experienced over the past few decades. In Brazil, economic expectations for 2020 anticipate a decline in GDP as a consequence of the pandemic, ranging between -5.3% and -5.6%, compared to the estimated real growth of 1.1% in 2019 (1.2% in 2018). In Mexico, economic expectations for 2020 anticipate an economic contraction as a result of the pandemic that could range between -9.6% and -9.8%, following growth of -0.3% in 2019 (2.2% in 2018).

The sharp declines in GDP forecast for this year in emerging markets will be detrimental to the development of their respective insurance industries, particularly the Non-Life business. However, the accommodative monetary policies adopted by the Bank of Brazil and the Bank of Mexico have triggered a sharp upward trend in the short section of the risk-free interest rate curves in their respective markets (see Charts 3 and 4). This is generating a favorable interest-rate environment in both markets by being able to offer medium- and long-term guaranteed rates that are higher than the short-term rates (term premium), which may soften the negative effect of the GDP contraction on their respective Life Savings and annuity insurance businesses. 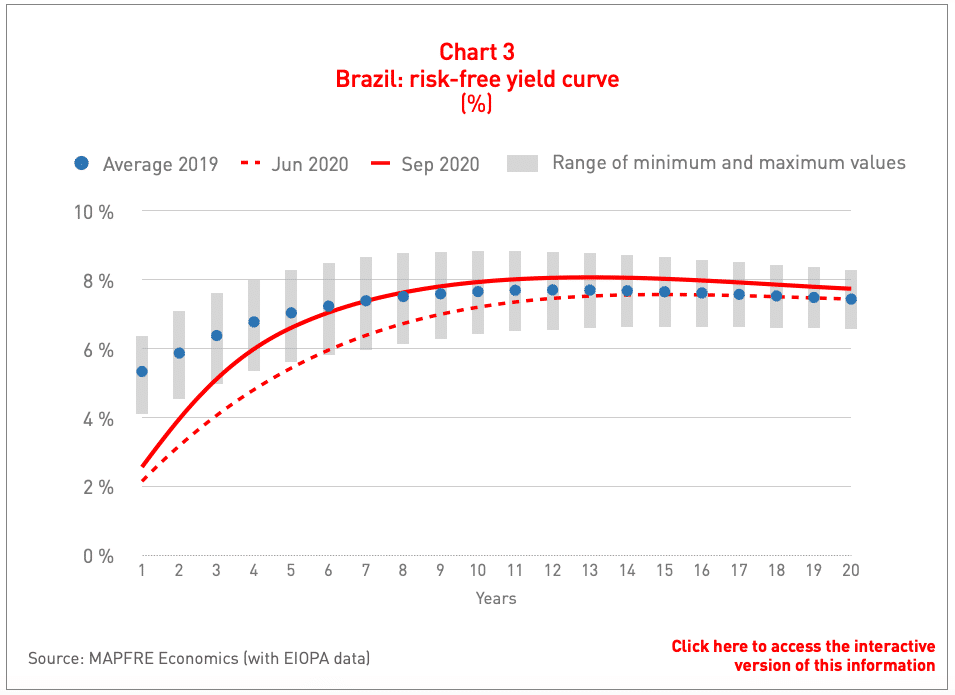 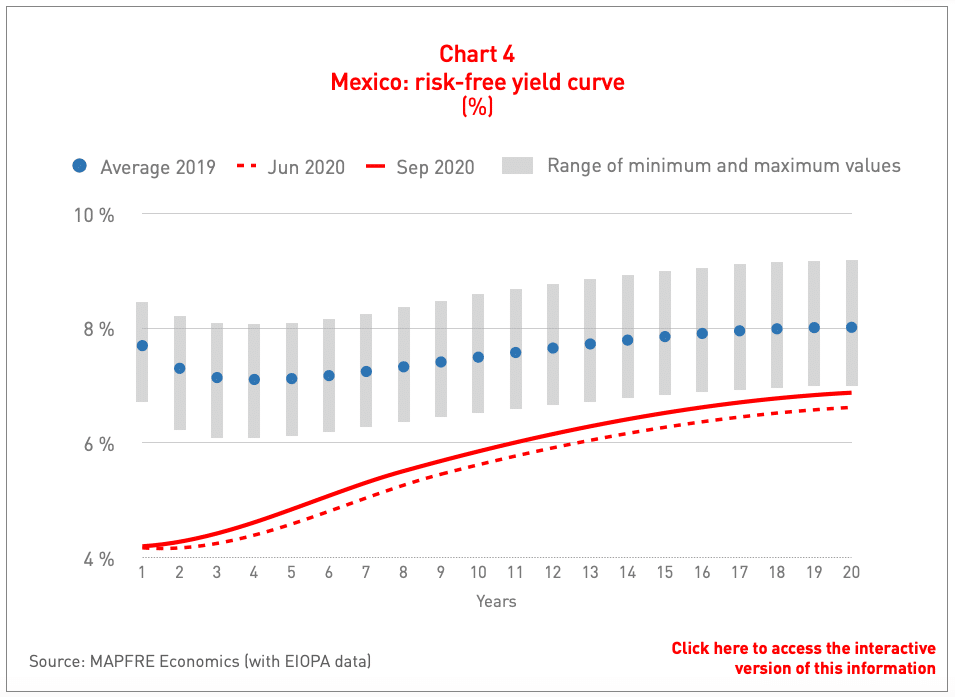 In Spain, the performance of the insurance business in the first nine months of 2020 continues to show very similar patterns to those seen in previous economic crises, with a sharp fall in the automobile business and a setback in the multirisks business. The most affected segment continues to be the Life Savings business, which had already been suffering before the pandemic-induced crisis. Health insurance, however, is performing anti-cyclically and continues to grow, bolstered by the very nature of the current crisis. Homeowner and condominium insurance, however, are proving resistant and only slowing, while other less important business lines such as travel assistance insurance are suffering severe setbacks.On the supervisory side, the Joint Committee of the European Supervisory Authorities in the areas of banking, securities and insurance (EBA, ESMA and EIOPA) published its latest report on the risks and vulnerabilities of the financial system in the European Union. The report highlights that the coronavirus outbreak has brought about significant social disruption and challenges for the economy that will have an inevitable impact on the finance sector, outlining the problems faced by banks, mutual funds, insurance companies and pension funds. Intervention by central banks, as well as messages from fiscal authorities regarding a wide range of economic support measures, both at the national and EU level, has restored stability to the financial markets, which suffered one of the fastest declines in modern history in February and March (close to 40% in a 20-day period for the main indices, even forcing some mutual funds to temporarily suspend reimbursements). This decline was partly driven by investors’ dash for cash. However, prolonging the low interest rate environment presents a challenge for banks’ profitability, for Life insurance companies and for pension funds. The report also notes that, since May, investors have started to differentiate between issuers and asset classes within a context of deterioration in economic fundamentals, meaning concerns are beginning to materialize regarding credit risk.The Joint Committee also highlights that European banks had a strong capital position before the crisis. However, it warns that the dispersion of individual solvency positions remains high and some banks that had lower capital levels and greater exposures to risk at the start of the crisis may face significant challenges. As for insurance companies, the report also highlights banks’ reasonable solvency position before the shock caused by the pandemic, with an overall solvency ratio of 213% at the close of 2019. Nevertheless, low risk-free interest rates, higher risk premiums (the “double-hit scenario”), the credit impairment of assets and economic uncertainty could negatively impact their solvency and profitability in the medium- and long-term.Full analysis of the economic and industry perspectives with additional information and interactive charts on the eurozone, Germany, Italy, Spain, the United Kingdom, the United States, Brazil, Mexico, Argentina, Turkey, Japan, China and the Philippines can be found in the report entitled 2020 Economic and Industry Outlook: Fourth Quarter Perspectives, compiled by MAPFRE Economics and available at the following link: