The measures taken to address the health crisis caused by the COVID-19 pandemic (now colloquially known as ‘the Great Lockdown‘), have triggered a sharp global economic recession. ‘Collateral damage’ from this includes increased financial market volatility and one of the effects of this is falling asset valuations; a situation that can have a significant impact on insurance companies’ balance sheets. The composition of these companies’ investment portfolios is of particular importance in estimating the impact of this phenomenon. A comparative analysis of the major global insurance markets, shows that the main item in their investment portfolios is fixed income securities (see Table 1).

Fixed income securities are characterized by a sharp rise in risk premiums having a direct impact on their valuation, which also falls sharply, with the most severe declines for portfolios containing bonds of longer duration. Risk premiums can be affected by various factors, but the two main ones are: (i) the liquidity conditions of financial markets and, related to this, (ii) the perception of credit or insolvency risk of the counterparties of those bonds in which the investments are made.

The measures taken by the major central banks worldwide are largely helping to solve the problems of liquidity shortages in bond markets, allowing these markets to continue to function properly. Issuing companies and states can thus continue to place their issued products in order to gain access to the liquidity needed to deal with the situation they face and, most importantly, to be able to refinance their debts at a reasonable cost. For insurance companies, the application of these measures greatly aids bailouts of both traditional Life insurance policies and of Life products in which the policyholder assumes the risk of the investment, which increase sharply when faced with the uncertainty created by these situations.

The quantitative easing programs adopted so far by central banks have been generous, thereby avoiding excessive tensions in bond spreads (in terms of risk premiums), particularly with regard to sovereign debt, but for corporate debt too. Even the US Federal Reserve, for the first time in its history, included debt issued by companies in its asset purchases program, extending these to cover corporate bonds that have lost their investment grade rating as a result of the pandemic crisis.

The Bank of Japan was the pioneer in such purchases, followed by the European Central Bank (ECB), which approved new programs that include acquiring both sovereign and corporate bonds, and relaxing rules on the volumes of assets that can be acquired from the various Member States. These programs are already being implemented and have led to the biggest bond purchases in the history of the ECB.

In addition, some central banks like the Fed and the Bank of England decided to reduce interest rates, seeking to stimulate the economy and offset the negative impact on both sovereign and corporate bond values, resulting from their increased risk premiums. However, though these rate cuts are an important measure to revive the economy, they damage traditional savings and annuity Life insurance business, until such time as economic agents accept the new levels as being permanent and decide to invest in savings instruments at lower rates, or choose to acquire risk products in which the policyholder assumes the risk of the investment.

In jurisdictions with a risk-based solvency regulation system, such as the European Union (Solvency II), there are mechanisms to correct the effects of occasional bouts of market volatility on insurance companies, given their character as long-term investors. These mechanisms seek to prevent them from having to make forced sales in times of financial market turbulence, with their consequent pro-cyclical effects. The business model of insurance companies leads to the maturities of their investment portfolios being largely aligned with the estimated payment path. This path comes from the commitments assumed in their insurance contracts, so that these assets can be conserved until they reach maturity.

However, if the problem persists and bond counterparties begin to suffer a deterioration in their credit quality, the situation may translate to the insurance companies’ balance sheets. In this respect, the composition of investment portfolios is of particular importance. Those markets where the majority of investment is in sovereign bonds, backed by the asset-acquisition programs of their respective central banks, have a more limited risk. However, insurance companies or markets where the majority of investment is in corporate bonds are most exposed to risk, because the credit ratings of these types of bonds often change quicker in such situations, which can lead to them losing their investment grade status and even falling into default. Notably, in the US market, insurance companies’ aggregate rate of investment in corporate bonds at the close of 2018 was 51.5 percent, compared to 31.4 percent on average in the eurozone (see Chart 1). 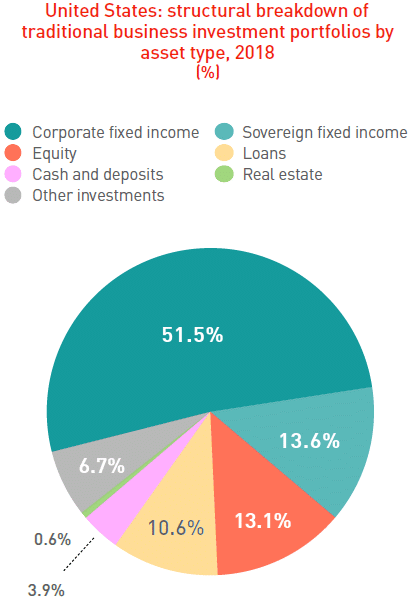 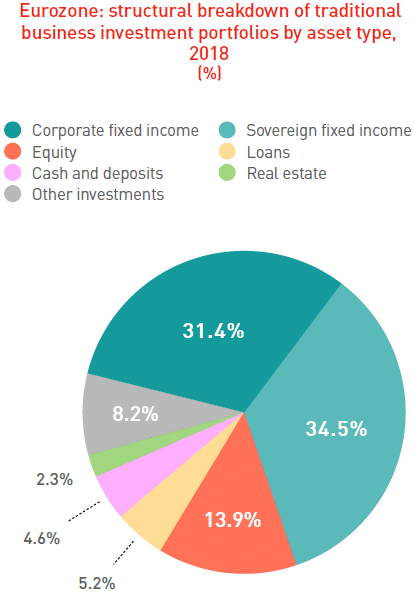 Source: MAPFRE Economics (with information from NAIC and EIOPA)

The insurance industry in Spain is traditionally very conservative in its investments, with the majority of its investment (56.9 percent) being in eurozone sovereign bonds. This puts it in a better position to tackle this crisis, because this kind of bond is backed by extensive ECB asset acquisition programs. The weighting of corporate bonds in the aggregate portfolio is just 21.8 percent, so exposure is lower. The same is true of equity investments, which have suffered widespread declines in valuations due to the pandemic crisis. Once again, the United States and eurozone markets (with over 13 percent of the total portfolio in both cases) hold a higher proportion of aggregate equity investments than Spanish insurance companies, where these account for around 6 percent of the total portfolio.

The following link takes you to the MAPFRE Economics’ study “Insurance industry investment,” which provides a detailed analysis of the aggregate investment portfolios of insurance companies in the eurozone, the United States, Japan, the United Kingdom, Spain, Brazil and Mexico. It also contains an analysis of the credit profile of the investment portfolios of the major European insurance groups.