Signs of a cyclical change crystallize

A number of factors seem to be giving shape to the signs noted in the second quarter of 2018 which indicated a cyclical change (forecast in this report at the end of 2017). Three of these signs seem to be the most relevant: (i) the pace of economic activity; (ii) the state of global liquidity and (iii) the trends in inflation.

Even though the PMIs, (Purchasing Managers Index), both in developed and emerging markets remain positive, a sharp slowdown in global production indexes, global retail sales and orders from industry are noteworthy: all in line with the sharply declining global sales indicators which are already negative. However, they convey a less bullish picture than six months ago, on a par with the majority of traded stock market valuations (except for the United States markets).

A gradual correction in equity valuations has occurred, returning to their basics in most markets, i.e. to lower PBV (price/book value) ratios, in line with less dynamic economic activity. There appears to be frequent but selective financial stress among emerging markets (cash outflows, currency depreciation, increases in market interest rates and risk premiums, and also the depletion of funding possibilities for many corporates). All this generally in a context marked by a Federal Reserve which is transitioning from balance sheet normalization to a withdrawal from monetary neutrality, and by other central banks following suit.

Global inflation has been strongly influenced by the upturn in the price of oil which exceeded USD 82 per barrel during September. In the context of the current tensions in supply, it is to be expected that this tendency will continue. This trend in prices has become evident with the widening gap between headline and core inflation over the last three months (+0.5% on average).

Despite this, it should be pointed out that symptoms of wage inflation have begun to appear given that the growth in salaries in developed markets has exceeded 2% and in some cases is at the threshold pursued by the central banks’ objective.

Against this background, although expectations about inflation remain well-founded, the current context could be a catalyst for a sudden inflationary process if: (i) the price of oil continues to rise because of restricted supply (there are analysts who see it going up to USD 100 per barrel); (ii) the effects of trade sanctions are absorbed by the decline in exchange rates of the emerging markets, and (iii) the pro-cyclical policies of some countries are maintained (see Charts 1 and 2). 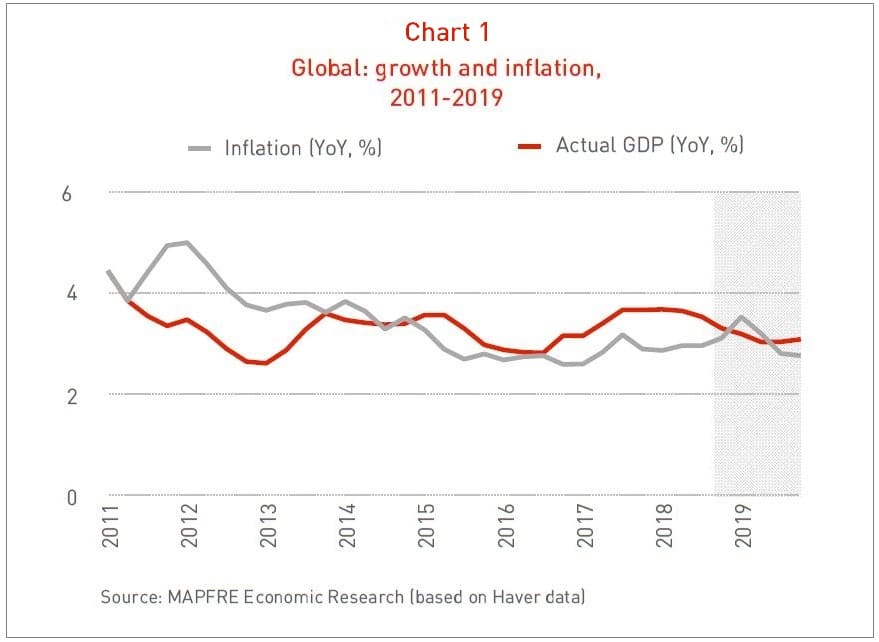 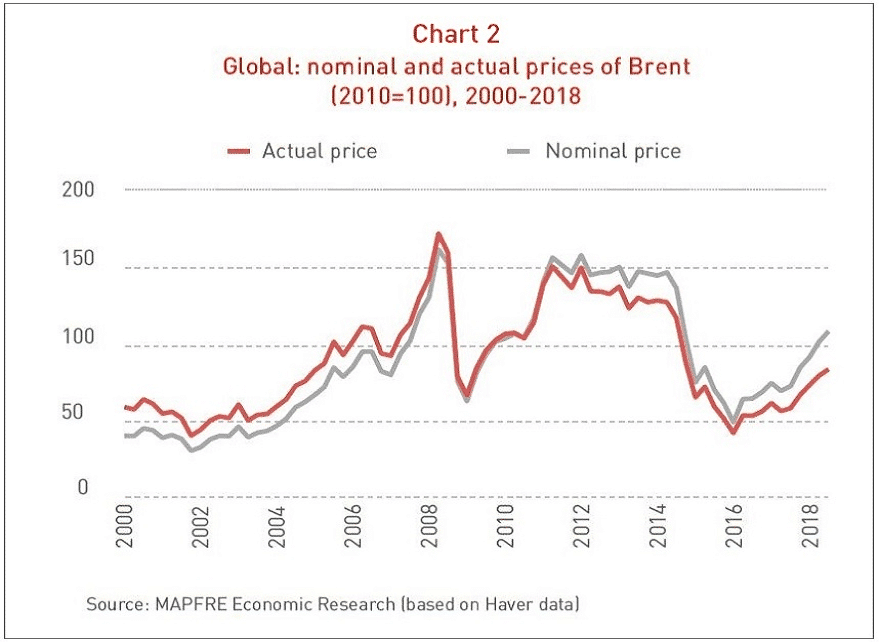 The current situation enables confirmation of the symptoms which anticipate (and characterize) the change in the global economic cycle: (a) loss of cyclical synchrony and coordination of monetary policies; (b) the rise of protectionism; (c) the increase in the price of oil; (d) the increase in the sources of volatility and financial stress in emerging markets, and (e) the emergence of global risks.

Loss of cyclical synchrony and coordination of monetary policies

The global economy, headed by the United States, continues to lose synchrony at the same time that the loss of coordination in the implementation of monetary policy is worsening.

a) The United States is at the end of the cycle with an output gap that is visibly positive (growing above potential) compared with Europe and Japan which are more behind in the cycle and still have a negative gap. Moreover, the growth of emerging markets is slowing down and in some cases is expected to go into recession at the end of this year.

b) In addition, a new stage of monetary policy has been reached. The US Federal Reserve seems to be accelerating the pace of interest rate rises but remains anchored to its reference natural interest rate (3%-3.5%) which will presumably rise earlier than forecast. Some opinions claim that the Federal Reserve plans to gain a margin on monetary policy for when the cyclical adjustment demands it. This is in contrast to the “dilettante” attitude of the European Central Bank (ECB) which is implicitly putting off the first interest rise to the end of the second half of 2019. This is one of the most significant factors behind the temporary upward movement of the USD/EUR exchange rate (which does not appear to be sustainable in the long-term).

The rise of protectionism

A second symptom has to do with the increase in protectionism in its three dimensions: trade, migration, and finance.

a) Trade. Its real effects are still to come to the extent that the anticipated tariffs are in fact implemented in full (at the moment they fluctuate between 10% and 25% of the value of imports, about USD 200 billion), and that reprisals are implemented by China. At the moment, its effects are felt in the deferral of investment and in the deterioration in confidence and some terms of trade.

b) Migration. Imbued into the discourse that is taking over at global level about the dangers of migration and loss of national identity, “protectionism” regarding migration may have a negative effect which gets channelled through obstacles to regional governance.

c) Finance. This specifically takes the shape of control over capital flows in certain markets. The International Monetary Fund (IMF) has itself gradually changed its stance over the control of capital during the last three years. The new chief economist (Gita Gopinath) is a standard-bearer for the policy of controlling exchange rates through the imposition of certain controls over capital flows.

In spite of these short-term implications, the costs of protectionism could end up being more relevant for the medium and long-term since they have disruptive effects on the global value chain, adversely hitting the current account of importers who are unable to adapt, and sharply depreciating the currency of the smaller economies.

The price of oil which at the beginning of 2016 was around USD 44 per barrel have increased to USD 82 per barrel now (see Chart 2).

This trend has been caused by supply problems (and not demand) and these are: (i) a decline of productive capacity in Venezuela and Angola; (ii) sanctions imposed on Iran; (iii) the run-down of stocks, and (iv) the decision at the latest meeting of the Organization of Petroleum Producing Countries (OPEC) not to increase production in order to contain prices.

This situation is having a dual impact on emerging markets. Firstly, through deterioration of crude importers’ terms of trade, and secondly through the erosion of real income due to inflation. However, the increase in price of crude in real terms has still been moderate and it would require the present price per barrel to double for it to resemble the tense situation that occurred at the end of the 1970s.

Increase in sources of volatility and financial stress in emerging markets

Additionally, financial stresses are already showing. These originate in corporate leverage in strong currencies, especially in the emerging economies, and here the disequilibrium committed to with the intensive stage of global liquidity and exposure to the effects of the exchange rate decline and increase in the price of wholesale funding (and therefore its translation into credit) is beginning to become evident.

Although the basic scenario put forward in this update report continues to be an orderly cyclical decline, the sources of global risk continue to grow as does their imminence in certain cases. In spite of a genuine origin in each region, all the risks have in common the potential to be activated in one way or another as a result of interaction with the economies of the United States, China, and the emerging markets. As a result, global risks, as they are now, are as follows: (1) Escalating tariffs (with greater severity in the medium-term); (2) loss of regional governability: (3) the potential for miscalculation in monetary policy in an adverse economic and financial environment and (4) a disorderly financial adjustment in China; all this in the context of emerging market vulnerability.

Risk has its protagonists

Finally, it is important to emphasize that there exist certain sources and channels which amplify our risk scenarios. This means that risk has its protagonists.

Sovereign and regional governance risk are increasing within the European Union. Two elements essentially make up this risk: (i) a Brexit without agreement becomes a likely scenario even though it has been ratified by the EU. Prime Minister May will find it very difficult to reach the necessary consensus so that the agreement as it is currently formulated will be supported in the British parliament on December 11. (ii) Italy is casting doubt on the Eurozone’s fiscal stability plans, gambling on a larger public deficit based on budget growth that will be difficult to sustain (risk premiums of surrounding countries go up). On January 13 the ECB will confirm the finalization of its asset purchase program thus initiating a new era for European monetary policy.

The emerging countries are operating as amplifiers of global risk and, given the vulnerabilities they bear, they are particularly sensitive to a global financial event with its origin, for example, in the United States economy.  In the last quarter, we reviewed how global factors such as the United States monetary policy are playing out in financial stress and the depreciation of some emerging market currencies in proportion to the misalignments and vulnerabilities they bear.

The Chinese economy is the source of the most serious risks in the medium-term for the global economy. This risk can operate through real and financial channels and has two fundamental root causes. The first, escalating protectionism vis-a-vis the USA which, although it has only just started, can occasion real and serious financial effects beyond the effects related to the tariffs themselves, and could lead to certain measures which could end in reprisals such as a sharp fall in the value of the renminbi or a disorderly sale of US debt.

And the second, the slowdown in deleveraging and the nominal and real adjustment in progress by means of which a gamble has been taken on lower growth and greater nominal stability, facilitating greater imbalance in corporate non-payment, stress on so-called “shadow banking”, and an (even greater) increase in the Chinese public debt.

The United States continues to be the main source of the most imminent risk (for reasons noted in the previous report). Among these risks, the most relevant (and the one which is in accordance with our risk scenario) would be a mistake in monetary policy (in which the expectations of the market and the members of the Federal Reserve converge) because of a misreading of actual inflation in a context of fragility in the financial markets where mismatches exist in the stock market valuations of a large portion of the Corporate sector and where a certain generalized exuberance in asset classes is noticeable.

The United States is also encountering public and private balances in a delicate situation, with high debt, no fiscal space, erosion of corporate and family savings, and (still) a loose monetary policy, with little room for downward adjustments. This is in accordance with our risk scenario, a scenario in which the Federal Reserve could increase interest rates quickly, causing a sharp domestic downturn with real and financial impact especially vis à vis the Eurozone (which would see an appreciation of its exchange rate and with the emerging markets, in particular those in a vulnerable position.

The complete analysis can be found in the report 2018 Economic and Industry Outlook: Fourth Quarter Perspectives, prepared by MAPFRE Economics, available at the following link:
DOWNLOAD REPORT (5,9 MB)
Share This