The Latin American Insurance Market in 2017

Latin America returned to growth in 2017 (1.3% of GDP) following more than two years of economic recession. This turnaround was due to an increase in world trade and rising raw material prices, which had the effect of strengthening the regional and domestic markets. This economic recovery was reflected in the aggregate growth in insurance market premiums, which showed an increase of 8.6% compared with 1.2% in 2016, with a balance being struck between the two segments: Non-Life business grew by 8.2% and Life business increased by 9%. 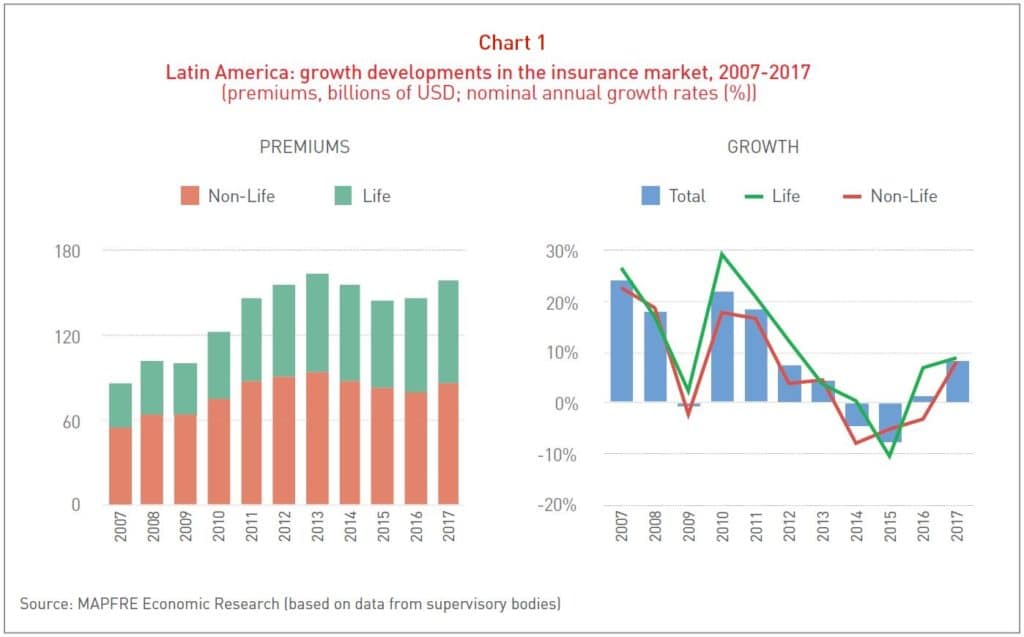 The economic recovery in 2017 has aided the development of the insurance market, which has now returned to positive growth. The region’s share of the global market now stands at 3.4% of total insurance premiums (2.9% for the Life business and 4% for the Non-Life business), though still a far cry from the share enjoyed by the more developed markets in the region, which is a good indicator of the region’s market potential.

A particular highlight is the improvement in the Non-Life business in 2017, a product of the rallying economy and increased spending by both households and businesses within the region. Automobile insurance enjoyed an increase of 9.3%, which contrasts with the contraction suffered in 2016 of -4.9% Most markets experienced positive growth in real terms in their respective currencies (see Chart 2). 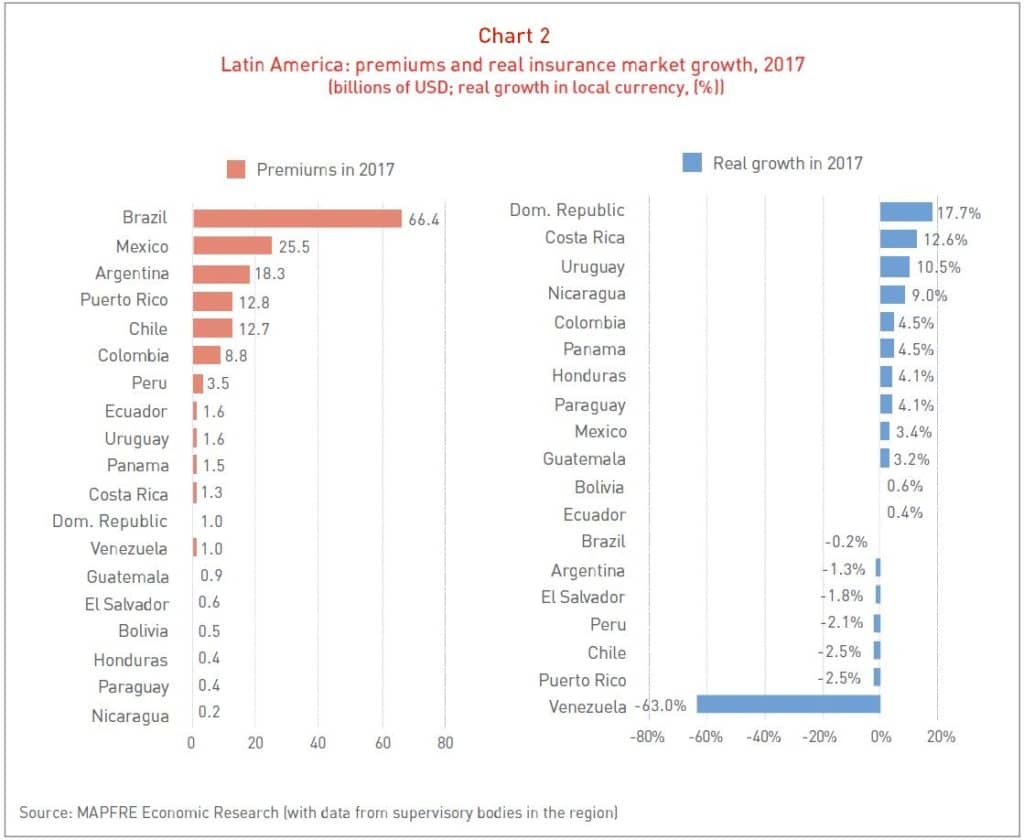 The net aggregate result for the insurance market in Latin America stood at 8.83 billion dollars in 2017. All countries had positive net results although the aggregate result for the Latin American market in 2017 (excluding Panama) fell some 18.7% in comparison with the previous year. Profits in Argentina, Brazil, El Salvador, Honduras, Peru and Venezuela were down year on year, while all the other countries reported growth.

On reviewing the structural trends in the insurance industry in Latin America between 2007 and 2017, it should be noted that the region’s insurance market has demonstrated balanced and positive growth in recent years. During that time, the Insurance Protection Gap (IPG) which represents the difference between optimum insurance coverage and that actually purchased, reduced throughout the last decade if measured in relative terms as a multiple of the actual insurance market (see Chart 3). 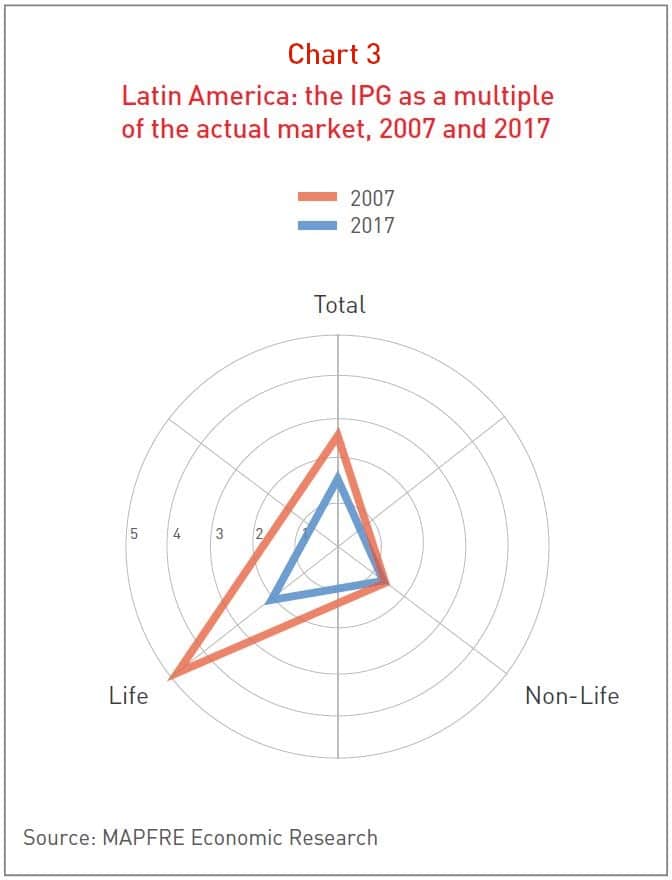 The density index (premiums/population) grew some 65.1% in the reference period and reached 259.5 dollars, although there was a distinction between the Life segment, which grew by 104.9% and the Non-Life segment which saw cumulative growth of 42.1%. However, the major portion of insurance expenditure per person continues to be concentrated on the Non-Life segment (141.7 dollars).

Lastly, the index of insurance depth, which measures the relationship between Life insurance premiums and total premiums, stood at 45.4% in 2017, showing accumulated growth of 24.1% in the analysis period. Puerto Rico and Chile took the lead as regards the penetration and density indexes; Brazil and Chile likewise, as regards the index of insurance depth. The Puerto Rican case is explained by insurance premiums being included in the Health premiums which are managed by the private sector and defrayed by government budgets (see Chart 4). 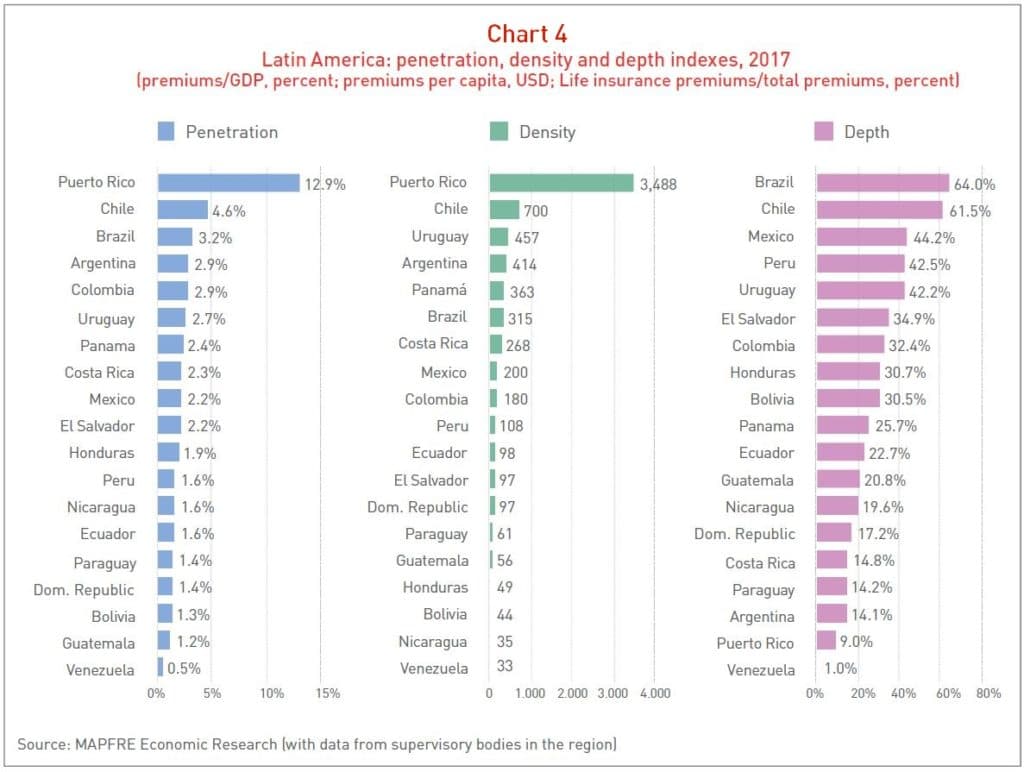 Finally, it should be noted that 2017 was a year in which the strength of the Latin American insurance industry was affirmed, as was its capacity to cope with the massive impact of catastrophic events. Several countries in the region had to deal with natural disasters which caused significant damage to both people and property, as did Hurricanes Harvey, Irma and María in the Caribbean, the earthquakes in Chiapas and Puebla (Mexico), and the El Niño Costero phenomenon in Peru. Nevertheless, what also emerged was the high level of under-insurance, or Insurance Protection Gap (IPG) for catastrophic risks, leaving a large proportion of damages uninsured.

The full analysis can be found in the report The Latin American Insurance Market in 2017 , prepared by MAPFRE Economics, available at the following link: