The slowdown in economic growth and the implementation of accommodative monetary policies in an attempt to stimulate the economy is not an isolated phenomenon affecting just some large economies such as Japan or the eurozone, but is beginning to become generalized at a global level and, in particular, in the United States. This situation will end up affecting the growth of global insurance premiums, which tends to slow down in such an economic context.

Emerging economies are also facing a possible slowdown in the growth of their insurance business. In Brazil and Mexico, as it stands, the weakness of economic growth could start to be passed through to their respective insurance markets, but forecasts for next year continue to look better.

Brazil finally approved a reform of the pension system that will help moderate the high fiscal deficit observed in its public accounts and that is improving the image and prospects of its economy from the standpoint of international financial investors. Moreover, the control of inflation and the lack of pressure to maintain exchange rates, in an international environment of generalized accommodative monetary policies, has allowed the Brazilian central bank to make a slight cut to the monetary policy benchmark interest rate in order to stimulate the economy. In Argentina, the outlook is complicated as its economy is falling into a deeper recession. In Turkey, however, the situation is improving as it has technically emerged from a recession, although growth is still expected to be weak.

The economic slowdown in Spain is beginning to affect employment, consumption and credit use by families and businesses, thereby reducing the growth expectations for the insurance market’s Non-Life and Life risk business lines, which are closely linked to the behavior of the economic cycle. This trend is confirmed by data from ICEA (Investigación Cooperativa entre Entidades Aseguradoras — Spanish Cooperative Research Insurance Association) as of the close of September 2019.

The Life savings business will continue to be hampered by the low interest rate environment affecting the whole of the eurozone and continuing to cause a decline in premiums. However, the volume of savings managed remains stable and is increasing slightly due to the profitability and improved valuation of portfolio investments following the latest fall in interest rates (Chart 1). 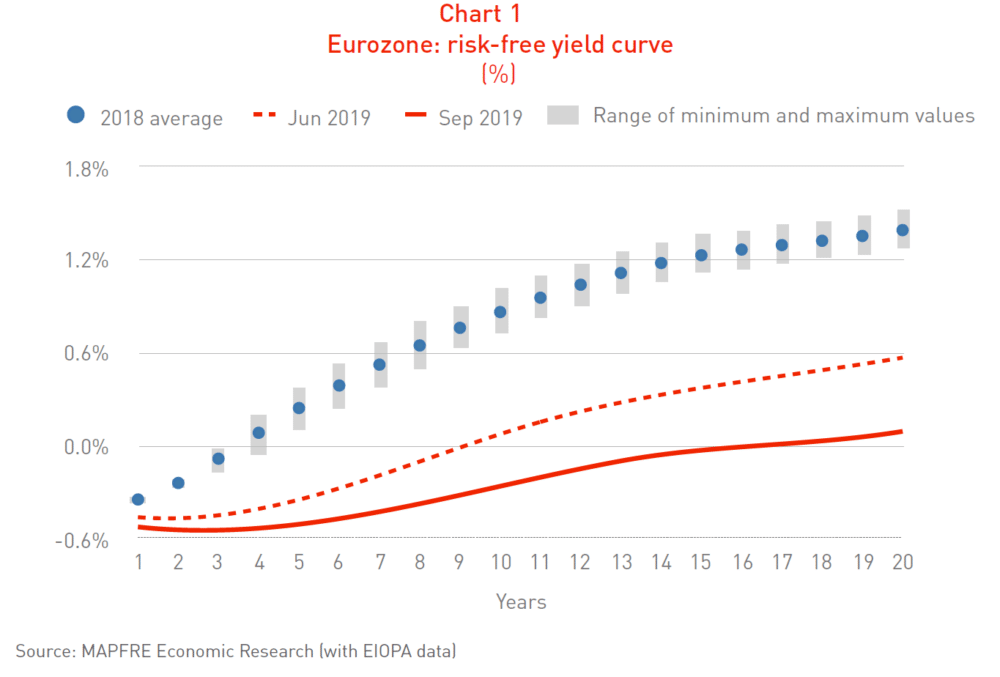 It should also be noted that the latest report published by the Joint Committee of the European Supervisory Authorities (EBA, ESMA and EIOPA) on risks and vulnerabilities in the financial system of the European Union highlighted that the prospect of a weakened eurozone and world economy, trade tensions, the challenges associated with high levels of debt and a no-deal Brexit (increasingly less likely) are key concerns that may impact financial stability. In addition to these risk factors, there is concern about higher-risk strategies in search of higher yields, implemented as a result of the prolonged low interest rate environment. The Joint Committee also refers to risks related to sustainable financing and environmental, social and governance (ESG) factors.

The full analysis of the economic and industry prospects can be found in the report Economic and Industry Outlook 2019: Fourth Quarter Perspectives drawn up by MAPFRE Economics, which is available via the following link: